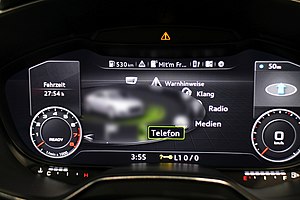 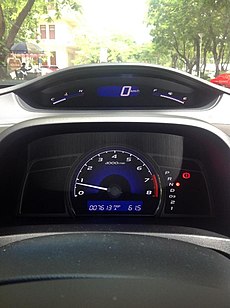 In an automobile, an electronic instrument cluster, digital instrument panel or digital dash for short, is a set of instrumentation, including the speedometer, that is displayed with a digital readout rather than with the traditional analog gauges. Many refer to it simply as a digital speedometer.

Digital instrument cluster from a 1984 Dodge 600

The first application of an electronic instrument cluster, in a production automobile, was in the 1976 Aston Martin Lagonda. The first American manufacturer application was the 1978 Cadillac Seville with available Cadillac Trip Computer. In the United States they were an option in many motor vehicles manufactured in the 1980s and 1990s, and were standard on some luxury vehicles at times, including some models made by Cadillac, Chrysler and Lincoln. They included not only a speedometer with a digital readout, but also a trip computer that displayed factors like the outdoor temperature, travel direction, fuel economy and distance to empty (DTE). In 1983, the Renault 11 Electronic was the first European hatchback to have a digital dashboard.[1] Many vehicles made today have an analog speedometer paired with the latter in digital form. In the late 1980s into the early 1990s, General Motors had touch-screen CRTs with features such as date books and hands-free cell phone integration built into cars such as the Oldsmobile Toronado, Buick Riviera and Buick Reatta.

When accelerating, digital speedometers generally step through a freeze frame of whole numbers at a constant sample rate. It is as precise as the number displaced, whereas a gauged speedometer pointer could sweep through an infinite range between its major markings at 10 mph or 20 km/h intervals. The latter provides a sense of continuous acceleration albeit with less precision: a gauge reading could only be estimated to the pointer's nearest halfway point between the markings.[2][3][4]

The first digital instrument clusters were considered to be unpopular during the years when they were widely produced, and were heavily criticized by reviewers in automotive magazines. Some of the criticism they received was as follows:

As a result of these issues, digital instrument panels were phased out of vehicles throughout the 1990s, and have been replaced with traditional analog gauges in most vehicles (with notable exceptions from French manufacturers Renault and Citroën), including those from luxury divisions. However, many vehicles are made today with a standard or optional trip computer located independently from the speedometer.

In the 2000s, digital speedometers were produced in some hybrid vehicles, including the Toyota Prius and Honda Insight.[6]

Most digital speedometers have had green numbers displayed on a dark green or black background. The 8th and 9th generation Honda Civic have a "two-tier" instrument panel. The upper digital dashboard with white numbers against a blue screen (the latter of which changes to green according to driving habits), digital fuel and temperature gauges. The lower dashboard has an analog tachometer and digital odometer. The 10th and present generation saw the two-tier design replaced with a single instrument panel, which in higher tiers is a fully digital and partially customizable design.[7]

Since the mid-2010s and early 2020s, fully customizable digital instrument clusters have become popular. The modern implementation allows the driver to choose which information to project where and how in the instrument cluster, such as navigation aid, connected phone information and blind spot camera view.[8][9] The customization can also reduce distraction for the driver and allow the manufacturer to use the same hardware in different models while retaining differentiation between models.[10]

Automotive head-up displays have seen applications in several cars, augmenting analog gauges with a digital readout on the windshield glass.

Vehicle instruments have been augmented by software-powered display panels conveying information on display panels. Digital instruments present data in the form of numeric parameters, textual messages, or graphical gauges. Unlike the electro-mechanical instrument clusters of the past, these interactive displays are much more versatile and flexible.

Many modern motorcycles are now equipped with digital speedometers, most often these are sports bikes.

Toyota is using electronic instruments for showing the cars parameters for its Yaris/Vitz model, the car employs a vacuum fluorescent display to indicate the speed, RPM, fuel level, odometer, etc.

The French manufacturer Citroën, is using digital indicators as speedometer for many models in its range, including the C2, C3, C4 and C6.

The 2009 Lexus LFA was one of the first cars to utilize a modern LCD screen cockpit. Lexus claimed a digital speedometer was required since an analogue tachometer wouldn't be able to keep up with the rev changes of the car's engine.[11] This statement however was mainly marketing-driven; there is no technical reason why an analog needle would not keep up with the (far heavier) engine itself.

In 2014, Audi launched [12] its 'virtual cockpit' on Audi TT, and has later introduced it to the several other models. The technology has been developed [13] together with the Finnish company Rightware, using its Kanzi software suite.

Electronic instrument clusters are being increasingly common features on railway vehicles, in which individual instruments are replaced by various forms of digital readouts. Early uses of instrument clusters often employed LEDs to display analog-type or numeric readings for pressure gauges, electrical gauges, and other displays. They have been increasingly integrated with various cab signalling systems and together with the installation of multi-function displays, have simplified the cab layout and improved user interaction with the engineer.[14]