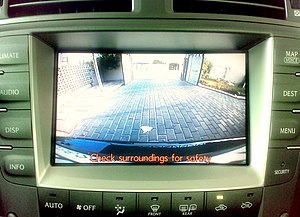 A backup camera (also called a reversing camera or rear-view camera) is a special type of video camera that is produced specifically for the purpose of being attached to the rear of a vehicle to aid in backing up, and to alleviate the rear blind spot. It is specifically designed to avoid a backup collision. The area directly behind vehicles has been described as a "killing zone" due to associated accidents.[1] Backup cameras are usually connected to the vehicle head unit display.

Backup cameras have been regulated by specific law in Canada and the United States since 2018.

The design of a backup camera is distinct from other cameras in that the image is horizontally flipped so that the output is a mirror image.[2] This is necessary because the camera and the driver face opposite directions, and without it, the camera's right would be on the driver's left and vice versa. A mirrored image makes the orientation of the display consistent with the physical mirrors installed on the vehicle. A backup camera typically sports a wide-angle or fisheye lens. While such a lens spoils the camera's ability to see faraway objects, it allows the camera to see an uninterrupted horizontal path from one rear corner to the other. The camera is typically pointed on a downward angle, to view potential obstacles on the ground as well as the position of approaching walls and docks, rather than straight back.

Backup cameras are common on vehicles that tow difficult-to-see trailers, such as motorhomes. Recently, with the rise in popularity of in-dash DVD players and GPS navigation systems which aid in justifying the expense of adding a color LCD to the driver's seat, they have become much more common, often available as optional factory accessories on standard passenger trucks and sport utility vehicles, as well as aftermarket accessories. Inside the vehicle, the display is typically wired to automatically sense when the transmission is set in reverse, showing the backup view while in reverse and or providing grid guidelines by detecting the parking lot markings to aid the driver. The display will typically show the map (or other standard content) on the screen in all other gear modes in most cars.

Backup cameras are produced in different varieties depending on the application.

The first backup camera was used in the 1956 Buick Centurion concept car, presented in January 1956 at the General Motors Motorama. The vehicle had a rear-mounted television camera that sent images to a TV screen in the dashboard in place of the rear-view mirror.[3]

Later the 1972 Volvo Experimental Safety Car (VESC) had a backup camera. However, the camera element did not make it into the following Volvo 240 model.[4][5]

The first production automobile to incorporate a backup camera was the 1991 Toyota Soarer Limited (UZZ31 and UZZ32), which was only available in Japan and not on its U.S. counterpart, the Lexus SC. The Toyota system used a color EMV screen, with a rear-spoiler-mounted CCD camera. The system was discontinued in 1997. In April 2000, Nissan's Infiniti luxury division introduced the RearView Monitor on the 2002 Q45 flagship sedan at the 2000 New York International Auto Show. Introducing coloured onscreen guide lines as a parking distance parameter, the RearView Monitor operated from a license-plate-mounted camera in the trunk that transmitted a mirrored image to an in-dash (7-inch) LCD screen. It was available as optional equipment upon North American market launch in March 2001.[6][7] The 2002 Nissan Primera introduced the RearView Monitor backup camera system to territories outside Japan and North America.

Aftermarket options for cars have been available for some time. Electronics manufacturers have made multiple car upgrades available that can be installed by professionals without replacing the car's center console.

Other types of camera systems can give a more comprehensive view. 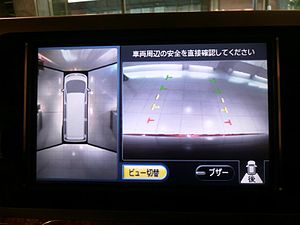 Around View Monitor on a Nissan Elgrand

In 2007 Nissan introduced their "Around View Monitor" on the 2008 Infiniti EX35, which uses four cameras to give a bird's eye view of the vehicle.[8][9] BMW introduced their competing system called Surround View in 2009 on the F10 5 Series.[10] Other automobile manufacturers have since offered similar systems and 2011 Toyota Introduced Panoramic View Monitor in a 2012 facelift Alphard and Vellfire.

First offered in October 2018, the Japanese market Lexus ES can be optioned with cameras as side view mirrors.[11]

This is an advanced type of reversing camera that does not require the use of cables between the camera itself and the display. It functions remotely. Wireless rear-view cameras usually have separate sources of power from the display.[12] The cameras are usually powered by the same power source as the brake and thus switches on automatically when one engages the reverse gear. Majority of these backup cameras usually come with a transmitter (near the camera) and a receiver (near the display) for relaying the signals and live images. Some models such as the Pearl RearVision backup camera, which is made by Pearl Automation, use solar energy for power.[2] The display for these types of backup camera can be powered from the cigarette socket on the car's dashboard. Some of the displays are also integrated on the rear-view mirror thereby giving it a multipurpose function. Some models also sync directly with one's phone using an app which then acts as the display. The main advantage of this type of backup camera is that it is extremely easy to install and rarely requires the help of professional when doing it. The installation of these cameras also do not interfere with a car's look as minimal to no drilling or laying of wires is required. However, this comes at a cost as some of these wireless cameras are quite expensive.

Blind spot monitors and other technology

Blind spot monitors are an option that may include more than monitoring the sides of the vehicle. It can include "Cross Traffic Alert", "which alerts drivers backing out of a parking space when traffic is approaching from the sides."[13][14][15]

The law specified a statutory deadline of February 2011 for issuing the final regulations. However, under the Obama administration the USDOT repeatedly granted itself extensions to the deadline, claiming it needed more time analyze the costs and benefits of the requirement.[18] In September 2013, Greg Gulbransen, the father of the child whom the law was named after, along with a group of consumers and advocates submitted a petition to the Second Circuit Court of Appeals, demanding that the USDOT implement regulations on backup cameras within 90 days.[19] About half of model year 2012 automobiles were equipped with backup cameras.[17][20]

On March 31, 2014, three years past its deadline, the U.S. National Highway Traffic Safety Administration announced that it would require all automobiles sold in the United States built beginning in May 2018 to include backup cameras.[21] On October 31, 2016, Transport Canada issued a similar mandate beginning at the same time.[22]