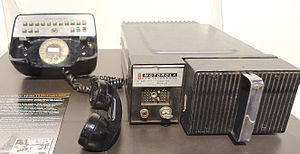 A car phone is a mobile radio telephone specifically designed for and fitted into an automobile. This service originated with the Bell System, and was first used in St. Louis on June 17, 1946.

The original equipment weighed 80 pounds (36 kg), and there were initially only 3 channels for all the users in the metropolitan area. Later, more licenses were added, bringing the total to 32 channels across 3 bands (See IMTS frequencies). This service was used at least into the 1980s in large portions of North America.[1]

In Finland , car phone service was first available in 1971 on the zero-generation ARP (Autoradiopuhelin, or Car Radiophone) service. This was succeeded in 1982 by the 1G system NMT (Nordic Mobile Telephone), used across Scandinavia and in other often remote areas.

In West Germany, car phone service was first released in 1958 as A-Netz service. In 1971, it reached its capacity limit of almost 11,000 subscribers and was succeeded by B-Netz in 1972, which featured direct dialing, not requiring a human operator to connect calls. However, in order to reach a subscriber, one would still need to know their location since handset would assume the local area code of the base station serving it. It was succeeded in 1985 by the C-Netz 1G system.

Since a traditional car phone uses a high-power transmitter and external antenna, it is ideal for rural or undeveloped areas where mobile handsets may not work well or at all. However, due to current US Federal Communications Commission regulations, carriers must pay penalties for activating any equipment that is not an E911 compliant device, such as analog.(citation?)

There were still some car phones available as recently as 2008, including the Nokia 810 and the Motorola VC6096 for use with GSM networks and a car phone made by NAL Research for the Iridium satellite network. Motorola provided US customers with the m800 and m900 car phones, for use with CDMA and GSM networks respectively. Some car phones had color screens and supported high speed data connections as well as the ability to access SIM cards stored in other phones via Bluetooth.

Since 2008, many automobiles have featured integrated, "hands-free" systems to utilize a consumer's cellular phone, via a Bluetooth wireless link or use an integrated transceiver. The systems use an internally mounted microphone, and the car's audio system, and may feature voice activation and control.[4][5]

In many countries, restricting cell phone use while driving is on an upward trend.[6][7]