Huolongchushui (fire dragon issuing from the water; Chinese: 火龙出水; pinyin: huolóngchushui[1]; literally: fire dragon out of water) were the earliest form of multistage rockets and ballistic cruise missiles used in post-classical China. The name of the weapon was used to strike fear into enemy troops. If the enemy was out of range, the fire dragon had a contingency: a magazine of three rocket driven arrows located within the mouth of the missile. It acted as one of the world's earliest multistage rockets and ballistic cruise missiles, fired at enemy ships in naval battles. 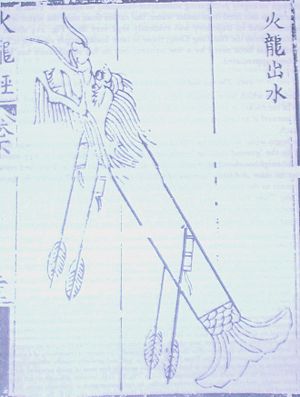 A 'fire dragon rising out of the water' (huo long chu shui) multistage rocket from the Huolongjing, it may be regarded as an ancestor to the modern exocet.[2]

The huolongchushui had a hollow bamboo tube with a carved wooden dragon head and tail about five feet long.[1] The front and rear contained four rockets packed with gunpowder that would propel the dragon forward. Fuses facing downloads of the four rockets outside the dragon body were linked with the fuses of the rockets inside the dragon's belly.[1] Just before the four rockets on the outside burnt out, it would automatically ignite fuses of arrow rockets hidden inside the rear of the dragon, which would then shoot out of its mouth propelled by the gunpowder to destroy the enemy.[1] The huolongcushui would be used on both land and sea.[1] The huolongchusui would operate on the principle of an early form of a two-stage rocket.[2] The two stage rocket would have a booster rocket attached to it that would then burn out automatically issuing a batch of smaller rockets hidden inside the dragon's belly.[2] The Huolongchushui may be considered the ancestor to the modern YingJi-62 ASCM.[2]

An illustration of the huolongchushui is found in the 14th century Chinese military treatise Huolongjing by Jiao Yu and Liu Bowen during the early Ming dynasty. The illustration and description depicts the world earliest form of the multistage rocket and ballistic cruise missile used by Ming Chinese army and navy.[3][2]