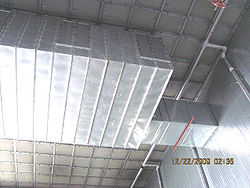 Smoke exhaust ductwork, in Europe, is typically protected via passive fire protection means, subject to fire testing (typically to NBN EN 1366-8) and listing and approval use and compliance. It is used to remove smoke from buildings, ships or offshore structures to enable emergency evacuation as well as improved firefighting. In North America, fireproofed ductwork may be used for the purpose of smoke exhaust, but it is more common to use unfireproofed return air ductwork, whereby no fire testing or listings are employed to qualify the ductwork for this use. Evidence of this North American practice can be found in the 2010 National Building Code of Canada, 3.2.8.8. Mechanical Exhaust System, as well as Sections 909.16.2 and 910 of the 2015 International Building Code.

Similar to pressurisation ductwork, smoke exhaust can be built using:

The primary difference between pressurisation and smoke exhaust ducting is that one pressurises an area, while the other reduces the pressure through exhausting smoke.

Some smoke exhaust ductwork requires no fireproofing if the smoke is not expected to be at elevated temperature.

Smoke exhaust ducting systems for land-based use are found in most industrialised nations. In North America, the primary purpose is to comply with building codes. Grease ducting is closely related and highly regulated in North America as well; its main purpose is exhaust of grease-laden vapours from commercial cooking operations, as opposed to smoke exhaust from accidental building fires.

Full scale fire testing must include three-dimensional exposures to ductwork as well as the firestop system. Installations must meet the listing.