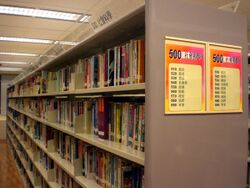 Library classification is an aspect of library and information science. It is distinct from scientific classification in that it has as its goal to provide a useful ordering of documents rather than a theoretical organization of knowledge.[2] Although it has the practical purpose of creating a physical ordering of documents, it does generally attempt to adhere to accepted scientific knowledge.[3] Library Classification helps to accommodate all the newly published literature in an already created order of arrangement in a filial sequence.[4]

Library classification can be defined as the arrangement of books on shelves, or description of them, in the manner which is most useful to those who read with the ultimate aim of grouping similar things together. Library classification is meant to achieve these four purposes like ordering the fields of knowledge in a systematic way, bring related items together in the most helpful sequence, provide orderly access on the shelve, and provide a location for an item on the shelf.[5]

Library classification is distinct from the application of subject headings in that classification organizes knowledge into a systematic order, while subject headings provide access to intellectual materials through vocabulary terms that may or may not be organized as a knowledge system.[6] The characteristics that a bibliographic classification demands for the sake of reaching these purposes are: a useful sequence of subjects at all levels, a concise memorable notation, and a host of techniques and devices of number synthesis.[7]

In 1627 Gabriel Naudé published a book called Advice on Establishing a Library. At the time, he was working in the private library of President Henri de Mesmes II. Mesmes had around 8,000 printed books and many more Greek, Latin and French written manuscripts. Although it was a private library, scholars with references could access it. The purpose of Advice on Establishing a Library was to identify rules for private book collectors to organize their collections in a more orderly way to increase the collection's usefulness and beauty. Naudé developed a classification system based on seven different classes: theology, medicine, jurisprudence, history, philosophy, mathematics and the humanities. These seven classes would later be increased to twelve.[10] Advice on Establishing a Library was about a private library, but within the same book, Naudé encouraged the idea of public libraries open to all people regardless of their ability to pay for access to the collection. One of the most famous libraries that Naudé helped improve was the Bibliothèque Mazarine in Paris. Naudé spent ten years there as a librarian. Because of Naudé's strong belief in free access to libraries to all people, the Bibliothèque Mazarine became the first public library in France around 1644.[11]

Although libraries created order within their collections from as early as the fifth century BC,[9] the Paris Bookseller's classification, developed in 1842 by Jacques Charles Brunet, is generally seen as the first of the modern book classifications. Brunet provided five major classes: theology, jurisprudence, sciences and arts, belles-lettres, and history.[12] Classification can now be seen as a provider of subject access to information in a networked environment.[13]

There are many standard systems of library classification in use, and many more have been proposed over the years. However, in general, classification systems can be divided into three types depending on how they are used:

In terms of functionality, classification systems are often described as:

There are few completely enumerative systems or faceted systems; most systems are a blend but favouring one type or the other. The most common classification systems, LCC and DDC, are essentially enumerative, though with some hierarchical and faceted elements (more so for DDC), especially at the broadest and most general level. The first true faceted system was the colon classification of S. R. Ranganathan.

The most common systems in English-speaking countries are:

Newer classification systems tend to use the principle of synthesis (combining codes from different lists to represent the different attributes of a work) heavily, which is comparatively lacking in LC or DDC.

The practice of classifying

Library classification of a piece of work consists of two steps. Firstly, the subject or topic of the material is ascertained. Next, a call number (essentially a book's address) based on the classification system in use at the particular library will be assigned to the work using the notation of the system.

It is important to note that unlike subject heading or thesauri where multiple terms can be assigned to the same work, in library classification systems, each work can only be placed in one class. This is due to shelving purposes: A book can have only one physical place. However, in classified catalogs one may have main entries as well as added entries. Most classification systems like the Dewey Decimal Classification (DDC) and Library of Congress Classification also add a cutter number to each work which adds a code for the main entry (primary access point) of the work (e.g. author).

Classification systems in libraries generally play two roles. Firstly, they facilitate subject access by allowing the user to find out what works or documents the library has on a certain subject.[18] Secondly, they provide a known location for the information source to be located (e.g. where it is shelved).

Some classification systems are more suitable for aiding subject access, rather than for shelf location. For example, Universal Decimal Classification, which uses a complicated notation of pluses and colons, is more difficult to use for the purpose of shelf arrangement but is more expressive compared to DDC in terms of showing relationships between subjects. Similarly faceted classification schemes are more difficult to use for shelf arrangement, unless the user has knowledge of the citation order.

As a result of differences in notation, history, use of enumeration, hierarchy, and facets, classification systems can differ in the following ways: