The Universal Decimal Classification (UDC) is a bibliographic and library classification representing the systematic arrangement of all branches of human knowledge organized as a coherent system in which knowledge fields are related and inter-linked.[1][2][3][4] The UDC is an analytico-synthetic and faceted classification system featuring detailed vocabulary and syntax that enables powerful content indexing and information retrieval in large collections.[5][6] Since 1991, the UDC has been owned and managed by the UDC Consortium,[7] a non-profit international association of publishers with headquarters in The Hague, Netherlands.

Unlike other library classification schemes that have started their life as national systems, the UDC was conceived and maintained as an international scheme. Its translation into other languages started at the beginning of the 20th century and has since been published in various printed editions in over 40 languages.[8][9] UDC Summary, an abridged Web version of the scheme, is available in over 50 languages.[10] The classification has been modified and extended over the years to cope with increasing output in all areas of human knowledge, and is still under continuous review to take account of new developments.[11][12]

Albeit originally designed as an indexing and retrieval system, due to its logical structure and scalability, UDC has become one of the most widely used knowledge organization systems in libraries, where it is used for either shelf arrangement, content indexing or both.[13] UDC codes can describe any type of document or object to any desired level of detail. These can include textual documents and other media such as films, video and sound recordings, illustrations, maps as well as realia such as museum objects. 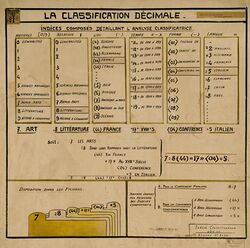 An explanatory schema of the Universal Decimal Classification index formation in French, 1920

The UDC was developed by the Belgian bibliographers Paul Otlet and Henri La Fontaine at the end of the 19th century. In 1895, they created the Universal Bibliographic Repertory (Répertoire Bibliographique Universel) (RBU) which was intended to become a comprehensive classified index to all published information. The idea that the RBU should take the form of a card catalogue came from the young American zoologist Herbert Haviland Field, who was at the time himself setting up a bibliographical agency in Zurich, the Concilium Bibliographicum.[14] A means of arranging the entries would be needed, and Otlet, having heard of the Dewey Decimal Classification, wrote to Melvil Dewey and obtained permission to translate it into French. The idea outgrew the plan of mere translation, and a number of radical innovations were made, adapting the purely enumerative classification (in which all the subjects envisaged are already listed and coded) into one which allows for synthesis (that is, the construction of compound numbers to denote interrelated subjects that could never be exhaustively foreseen); various possible relations between subjects were identified, and symbols assigned to represent them. In its first edition in French "Manuel du Répertoire bibliographique universel" (1905), the UDC already included many features that were revolutionary in the context of knowledge classifications: tables of generally applicable (aspect-free) concepts—called common auxiliary tables; a series of special auxiliary tables with specific but re-usable attributes in a particular field of knowledge; an expressive notational system with connecting symbols and syntax rules to enable coordination of subjects and the creation of a documentation language proper.

The Universal Bibliographic Repertory itself has developed into a remarkable information resource. In the period before World War I it grew to more than eleven million records. The catalogue and its content organized by UDC can still be seen in Mundaneum in Mons, Belgium (in 2013 recommended for inclusion in the UNESCO Memory of the World Register[15]).

The application of UDC

UDC is used in around 150,000 libraries in 130 countries and in many bibliographical services which require detailed content indexing. In a number of countries it is the main classification system for information exchange and is used in all types of libraries: public, school, academic and special libraries.[16][17][18]

UDC is also used in national bibliographies of around 30 countries. Examples of large databases indexed by UDC include:[19]

The design of UDC lends itself to machine readability, and the system has been used both with early automatic mechanical sorting devices, and modern library OPACs.[23][24] Since 1993, a standard version of UDC has been maintained and distributed in a database format: UDC Master Reference File (UDC MRF) which is updated and released regularly.[25] The 2011 version of the MRF (released in 2012) contains over 70,000 classes.[1] In the past full printed editions used to have around 220,000 subdivisions.[10]

A notation is a code commonly used in classification schemes to represent a class, i.e. a subject and its position in the hierarchy, to enable mechanical sorting and filing of subjects. UDC uses Arabic numerals arranged decimally. Every number is thought of as a decimal fraction with the initial decimal point omitted, which determines the filing order. An advantage of decimal notational systems is that they are infinitely extensible, and when new subdivisions are introduced, they need not disturb the existing allocation of numbers. For ease of reading, a UDC notation is usually punctuated after every third digit:

In UDC the notation has two features that make the scheme easier to browse and work with:

UDC is an analytico-synthetic and faceted classification. It allows an unlimited combination of attributes of a subject and relationships between subjects to be expressed. UDC codes from different tables can be combined to present various aspects of document content and form, e.g. 94(410)"19"(075) History (main subject) of United Kingdom (place) in 20th century (time), a textbook (document form). Or: 37:2 Relationship between Education and Religion. Complex UDC expressions can be accurately parsed into constituent elements.

UDC is also a disciplinary classification covering the entire universe of knowledge.[26] This type of classification can also be described as aspect or perspective, which means that concepts are subsumed and placed under the field in which they are studied. Thus, the same concept can appear in different fields of knowledge. This particular feature is usually implemented in UDC by re-using the same concept in various combinations with the main subject, e.g. a code for language in common auxiliaries of language is used to derive numbers for ethnic grouping, individual languages in linguistics and individual literatures. Or, a code from the auxiliaries of place, e.g. (410) United Kingdom, uniquely representing the concept of United Kingdom can be used to express 911(410) Regional geography of United Kingdom and 94(410) History of United Kingdom.

Concepts are organized in two kinds of tables in UDC:[27]

The vacant class 4 is the result of a planned schedule expansion. This class was freed by moving linguistics into class 8 in the 1960s to make space for future developments in the rapidly expanding fields of knowledge; primarily natural sciences and technology.

Common auxiliaries are aspect-free concepts that can be used in combination with any other UDC code from the main classes or with other common auxiliaries. They have unique notational representations that makes them stand out in complex expressions. Common auxiliary numbers always begin with a certain symbol known as a facet indicator, e.g. = (equal sign) always introduces concepts representing the language of a document; (0...) numbers enclosed in parentheses starting with zero always represent a concept designating document form. Thus (075) Textbook and =111 English can be combined to express, e.g.(075)=111 Textbooks in English, and when combined with numbers from the main UDC tables they can be used as follows: 2(075)=111 Religion textbooks in English, 51(075)=111 Mathematics textbooks in English etc.

In order to preserve the precise meaning and enable accurate parsing of complex UDC expressions, a number of connecting symbols are made available to relate and extend UDC numbers. These are:

The UDC tables for religion are fully faceted. Indicated in italics below, are special auxiliary numbers that can be used to express attributes (facets) of any specific faith. Any special number can be combined with any religion e.g. -5 Worship can be used to express e.g. 26-5 Worship in Judaism, 27-5 Worship in Christianity, 24-5 Worship in Buddhism. The complete special auxiliary tables contain around 2000 subdivisions of various attributes that can be attached to express various aspects of individual faiths to a great level of specificity allowing equal level of detail for every religion. 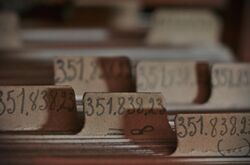 Universal decimal classification used at the library of the maison Losseau.

This section is currently vacant.

Class 6 occupies the largest proportion of UDC schedules. It contains over 44,000 subdivisions. Each specific field of technology or industry usually contains more than one special auxiliary table with concepts needed to express operations, processes, materials and products. As a result, UDC codes are often created through the combination of various attributes. Equally, some parts of this class enumerate concepts to a great level of detail e.g. 621.882.212 Hexagon screws with additional shapes. Including: Flank screws. Collar screws. Cap screws

Tables for class 8 are fully faceted and details are expressed through combination with common auxiliaries of language (Table 1c) and a series of special auxiliary tables to indicate other facets or attributes in Linguistics or Literature. As a result, this class allows for great specificity in indexing although the schedules themselves occupy very little space in UDC. The subdivisions of e.g. 811 Languages or 821 Literature are derived from common auxiliaries of language =1/=9 (Table 1c) by substituting a point for the equals sign, e.g. 811.111 English language (as a subject of a linguistic study) and 821.111 English literature derives from =111 English language. Common auxiliaries of place and time are also frequently used in this class to express place and time facets of Linguistics or Literature, e.g. 821.111(71)"18" English literature of Canada in 19th century

Tables for Geography and History in UDC are fully faceted and place, time and ethnic grouping facets are expressed through combination with common auxiliaries of place (Table 1d), ethnic grouping (Table 1f) and time (Table 1g)

They are derived mainly from the common auxiliaries of language =... (Table 1c) and so may also usefully distinguish linguistic-cultural groups, e.g. =111 English is used to represent (=111) English speaking peoples

Special classifications based on or used in combination with UDC