Lawrence Berkeley National Laboratory (LBNL), commonly referred to as Berkeley Lab, is a United States national laboratory that is owned by, and conducts scientific research on behalf of, the United States Department of Energy. Located in the hills of Berkeley, California, the lab overlooks the campus of the University of California, Berkeley, and is managed by the University of California system.

The laboratory was founded on August 26, 1931, by Ernest Lawrence, as the Radiation Laboratory of the University of California, Berkeley, associated with the Physics Department. It centered physics research around his new instrument, the cyclotron, a type of particle accelerator for which he was awarded the Nobel Prize in Physics in 1939.[4] Throughout the 1930s, Lawrence pushed to create larger and larger machines for physics research, courting private philanthropists for funding. He was the first to develop a large team to build big projects to make discoveries in basic research.[5] Eventually these machines grew too large to be held on the university grounds, and in 1940 the lab moved to its current site atop the hill above campus.[4] Part of the team put together during this period includes two other young scientists who went on to direct large laboratories; J. Robert Oppenheimer directed Los Alamos Laboratory, and Robert Wilson directed Fermilab.

Leslie Groves visited Lawrence's Radiation Laboratory in late 1942 as he was organizing the Manhattan Project, meeting J. Robert Oppenheimer for the first time. Oppenheimer was tasked with organizing the nuclear bomb development effort and founded today's Los Alamos National Laboratory to help keep the work secret.[5] At the RadLab, Lawrence and his colleagues developed the technique of electromagnetic enrichment of uranium using their experience with cyclotrons. The calutrons (named after the University) became the basic unit of the massive Y-12 facility in Oak Ridge, Tennessee . Lawrence's lab helped contribute to what have been judged to be the three most valuable technology developments of the war (the atomic bomb, proximity fuze, and radar). The cyclotron, whose construction was stalled during the war, was finished in November 1946. The Manhattan Project shut down two months later.

After the war, the Radiation Laboratory became one of the first laboratories to be incorporated into the Atomic Energy Commission (AEC) (now Department of Energy, DOE). The most highly classified work remained at Los Alamos, but the RadLab remained involved. Edward Teller suggested setting up a second lab similar to Los Alamos to compete with their designs. This led to the creation of an offshoot of the RadLab (now the Lawrence Livermore National Laboratory) in 1952. Some of the RadLab's work was transferred to the new lab, but some classified research continued at Berkeley Lab until the 1970s, when it became a laboratory dedicated only to unclassified scientific research.

Shortly after the death of Lawrence in August 1958, the UC Radiation Laboratory (both branches) was renamed Lawrence Radiation Laboratory. The Berkeley location became Lawrence Berkeley Laboratory in 1971,[6][7] although many continued to call it the RadLab. Gradually, another shortened form came into common usage, LBL. Its formal name was amended to Ernest Orlando Lawrence Berkeley National Laboratory in 1995, when "National" was added to the names of all DOE labs. "Ernest Orlando" was later dropped to shorten the name. Today, the lab is commonly referred to as Berkeley Lab.[8]

The Alvarez Physics Memos are a set of informal working papers of the large group of physicists, engineers, computer programmers, and technicians led by Luis W. Alvarez from the early 1950s until his death in 1988. Over 1700 memos are available on-line, hosted by the Laboratory.[9]

In 2018, the lab remains owned by the U.S. Department of Energy, with management from the University of California. Companies such as Intel were funding the lab's research into computing chips.[10] 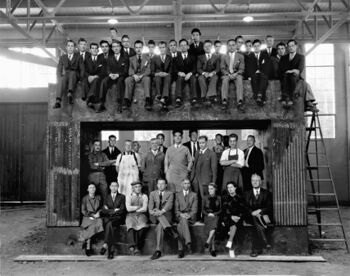 From the 1950s through the present, Berkeley Lab has maintained its status as a major international center for physics research, and has also diversified its research program into almost every realm of scientific investigation. Its mission is to solve the most pressing and profound scientific problems facing humanity, conduct basic research for a secure energy future, understand living systems to improve the environment, health, and energy supply, understand matter and energy in the universe, build and safely operate leading scientific facilities for the nation, and train the next generation of scientists and engineers 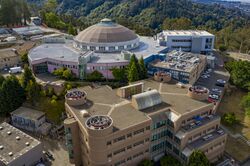 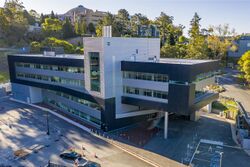 The Integrative Genomics Building, home to the Joint Genome Institute 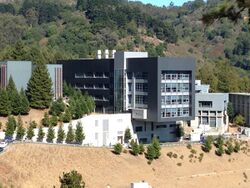 Berkeley Lab is the lead partner in the Joint BioEnergy Institute (JBEI), located in Emeryville, California. Other partners are the Sandia National Laboratories, the University of California (UC) campuses of Berkeley and Davis, the Carnegie Institution for Science, and Lawrence Livermore National Laboratory (LLNL). JBEI's primary scientific mission is to advance the development of the next generation of biofuels – liquid fuels derived from the solar energy stored in plant biomass. JBEI is one of three new U.S. Department of Energy (DOE) Bioenergy Research Centers (BRCs).

Berkeley Lab has a major role in two DOE Energy Innovation Hubs.[16] The mission of the Joint Center for Artificial Photosynthesis (JCAP) is to find a cost-effective method to produce fuels using only sunlight, water, and carbon dioxide. The lead institution for JCAP is the California Institute of Technology and Berkeley Lab is the second institutional center.[17] The mission of the Joint Center for Energy Storage Research (JCESR) is to create next-generation energy storage technologies that will transform transportation and the electricity grid.[18] Argonne National Laboratory leads JCESR and Berkeley Lab is a major partner.

The University of California operates Lawrence Berkeley National Laboratory under a contract with the Department of Energy. The site consists of 76 buildings (owned by the U.S. Department of Energy) located on 200 acres (0.81 km2) owned by the university in the Berkeley Hills. Altogether, the Lab has some 4,000 UC employees, of whom about 800 are students or postdocs, and each year it hosts more than 3,000 participating guest scientists. There are approximately two dozen DOE employees stationed at the laboratory to provide federal oversight of Berkeley Lab's work for the DOE. The laboratory director, Michael Witherell, is appointed by the university regents and reports to the university president. Although Berkeley Lab is governed by UC independently of the Berkeley campus, the two entities are closely interconnected: more than 200 Berkeley Lab researchers hold joint appointments as UC Berkeley faculty.

Notable scientific accomplishments at the Lab since World War II include the observation of the antiproton, the discovery of several transuranic elements, and the discovery of the accelerating universe.

Elements discovered by Berkeley Lab physicists include astatine, neptunium, plutonium, americium, curium, berkelium*, californium*, einsteinium, fermium, mendelevium, nobelium, lawrencium*, dubnium, and seaborgium*. Those elements listed with asterisks (*) are named after the University Professors Lawrence and Seaborg. Seaborg was the principal scientist involved in their discovery. The element technetium was discovered after Ernest Lawrence gave Emilio Segrè a molybdenum strip from the Berkeley Lab cyclotron.[20] The fabricated evidence used to claim the creation of oganesson and livermorium by Victor Ninov, a researcher employed at Berkeley Lab, led to the retraction of two articles.[21]

Inventions and discoveries to come out of Berkeley Lab include: "smart" windows with embedded electrodes that enable window glass to respond to changes in sunlight, synthetic genes for antimalaria and anti-AIDS superdrugs based on breakthroughs in synthetic biology, electronic ballasts for more efficient lighting, Home Energy Saver, the web's first do-it-yourself home energy audit tool, a pocket-sized DNA sampler called the PhyloChip, and the Berkeley Darfur Stove, which uses one-quarter as much firewood as traditional cook stoves. One of Berkeley Lab's most notable breakthroughs is the discovery of dark energy. During the 1980s and 1990s Berkeley Lab physicists and astronomers formed the Supernova Cosmology Project (SCP), using Type Ia supernovae as "standard candles" to measure the expansion rate of the universe. Their successful methods inspired competition, with the result that early in 1998 both the SCP and the High-Z Supernova Search Team announced the surprising discovery that expansion is accelerating; the cause was soon named dark energy.

Arthur Rosenfeld, a senior scientist at Berkeley Lab, was a prominent advocate for energy efficiency from 1975 until his death in 2017. He led efforts at the Lab that produced several technologies that radically improved efficiency: compact fluorescent lamps, low-energy refrigerators, and windows that trap heat. He established the Center for Building Science at the Lab, which developed into the Building Technology and Urban Systems Division. He developed the first energy-efficiency standards for buildings and appliances in California, which helped the state to sustain constant electricity use per capita, a phenomenon called the Rosenfeld effect. The Energy Efficiency and Environmental Impacts Division continues to set the research foundation for the national energy efficiency standards and works with China, India, and other countries to help develop their standards.[22]

Carl Haber and Vitaliy Fadeyev of Berkeley Lab developed the IRENE system for optical scanning of audio discs and cylinders.[23]

In December 2018, researchers at Intel Corp. and Lawrence Berkeley National Laboratory published a paper in Nature, which outlined a chip "made with quantum materials called magnetoelectric multiferroics instead of the conventional silicon," to allow for increased processing and reduced energy consumption to support technology such as artificial intelligence.[10]