Argonne was initially formed to carry out Enrico Fermi's work on nuclear reactors as part of the Manhattan Project. It was designated as the first national laboratory in the United States on July 1, 1946.[2] In the post-war era the lab focused primarily on non-weapon related nuclear physics, designing and building the first power-producing nuclear reactors, helping design the reactors used by the United States' nuclear navy, and a wide variety of similar projects. In 1994, the lab's nuclear mission ended, and today it maintains a broad portfolio in basic science research, energy storage and renewable energy, environmental sustainability, supercomputing, and national security.

UChicago Argonne, LLC, the operator of the laboratory, "brings together the expertise of the University of Chicago (the sole member of the LLC) with Jacobs Engineering Group Inc."[3] Argonne is a part of the expanding Illinois Technology and Research Corridor. Argonne formerly ran a smaller facility called Argonne National Laboratory-West (or simply Argonne-West) in Idaho next to the Idaho National Engineering and Environmental Laboratory. In 2005, the two Idaho-based laboratories merged to become the Idaho National Laboratory.[4]

Argonne has five main areas of focus. These goals, as stated by the DOE in 2008,[5] consist of: 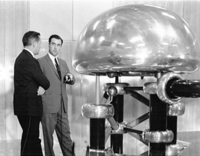 What would become Argonne began in 1942 as the Metallurgical Laboratory at the University of Chicago, which had become part of the Manhattan Project. The Met Lab built Chicago Pile-1, the world's first nuclear reactor, under the stands of the University of Chicago sports stadium. Considered unsafe, in 1943, CP-1 was reconstructed as CP-2, in what is today known as Red Gate Woods but was then the Argonne Forest of the Cook County Forest Preserve District near Palos Hills. The lab was named after the surrounding forest, which in turn was named after the Forest of Argonne in France where U.S. troops fought in World War I.[6] Fermi's pile was originally going to be constructed in the Argonne forest, and construction plans were set in motion, but a labor dispute brought the project to a halt. Since speed was paramount, the project was moved to the squash court under Stagg Field, the football field on the campus of the University of Chicago. Fermi told them that he was sure of his calculations, which said that it would not lead to a runaway reaction, which would have contaminated the city.

Other activities were added to Argonne over the next five years. On July 1, 1946, the "Metallurgical Laboratory" was formally re-chartered as Argonne National Laboratory for "cooperative research in nucleonics." At the request of the U.S. Atomic Energy Commission, it began developing nuclear reactors for the nation's peaceful nuclear energy program. In the late 1940s and early 1950s, the laboratory moved to a larger location in unincorporated DuPage County, Illinois and established a remote location in Idaho, called "Argonne-West," to conduct further nuclear research.

In quick succession, the laboratory designed and built Chicago Pile 3 (1944), the world's first heavy-water moderated reactor, and the Experimental Breeder Reactor I (Chicago Pile 4), built-in Idaho, which lit a string of four light bulbs with the world's first nuclear-generated electricity in 1951. A complete list of the reactors designed and, in most cases, built and operated by Argonne can be viewed in the, "Reactors Designed by Argonne" page. The knowledge gained from the Argonne experiments conducted with these reactors 1) formed the foundation for the designs of most of the commercial reactors currently used throughout the world for electric power generation and 2) inform the current evolving designs of liquid-metal reactors for future commercial power stations.

Conducting classified research, the laboratory was heavily secured; all employees and visitors needed badges to pass a checkpoint, many of the buildings were classified, and the laboratory itself was fenced and guarded. Such alluring secrecy drew visitors both authorized—including King Leopold III of Belgium and Queen Frederica of Greece[7]—and unauthorized. Shortly past 1 a.m. on February 6, 1951, Argonne guards discovered reporter Paul Harvey near the 10-foot (3.0 m) perimeter fence, his coat tangled in the barbed wire. Searching his car, guards found a previously prepared four-page broadcast detailing the saga of his unauthorized entrance into a classified "hot zone". He was brought before a federal grand jury on charges of conspiracy to obtain information on national security and transmit it to the public, but was not indicted.[8]

Not all nuclear technology went into developing reactors, however. While designing a scanner for reactor fuel elements in 1957, Argonne physicist William Nelson Beck put his own arm inside the scanner and obtained one of the first ultrasound images of the human body.[9] Remote manipulators designed to handle radioactive materials laid the groundwork for more complex machines used to clean up contaminated areas, sealed laboratories or caves.[10] In 1964, the "Janus" reactor opened to study the effects of neutron radiation on biological life, providing research for guidelines on safe exposure levels for workers at power plants, laboratories and hospitals.[11] Scientists at Argonne pioneered a technique to analyze the moon's surface using alpha radiation, which launched aboard the Surveyor 5[12] in 1967 and later analyzed lunar samples from the Apollo 11 mission.

In addition to nuclear work, the laboratory maintained a strong presence in the basic research of physics and chemistry. In 1955, Argonne chemists co-discovered the elements einsteinium and fermium, elements 99 and 100 in the periodic table.[13] In 1962, laboratory chemists produced the first compound of the inert noble gas xenon, opening up a new field of chemical bonding research.[14] In 1963, they discovered the hydrated electron.[15]

High-energy physics made a leap forward when Argonne was chosen as the site of the 12.5 GeV Zero Gradient Synchrotron, a proton accelerator that opened in 1963. A bubble chamber allowed scientists to track the motions of subatomic particles as they zipped through the chamber; in 1970, they observed the neutrino in a hydrogen bubble chamber for the first time.[16]

Meanwhile, the laboratory was also helping to design the reactor for the world's first nuclear-powered submarine, the U.S.S. Nautilus, which steamed for more than 513,550 nautical miles (951,090 km). The next nuclear reactor model was Experimental Boiling Water Reactor, the forerunner of many modern nuclear plants, and Experimental Breeder Reactor II (EBR-II), which was sodium-cooled, and included a fuel recycling facility. EBR-II was later modified to test other reactor designs, including a fast-neutron reactor and, in 1982, the Integral Fast Reactor concept—a revolutionary design that reprocessed its own fuel, reduced its atomic waste and withstood safety tests of the same failures that triggered the Chernobyl and Three Mile Island disasters.[17] In 1994, however, the U.S. Congress terminated funding for the bulk of Argonne's nuclear programs.

Argonne moved to specialize in other areas, while capitalizing on its experience in physics, chemical sciences and metallurgy. In 1987, the laboratory was the first to successfully demonstrate a pioneering technique called plasma wakefield acceleration, which accelerates particles in much shorter distances than conventional accelerators.[18] It also cultivated a strong battery research program.

Following a major push by then-director Alan Schriesheim, the laboratory was chosen as the site of the Advanced Photon Source, a major X-ray facility which was completed in 1995 and produced the brightest X-rays in the world at the time of its construction.

On 19 March 2019, it was reported in the Chicago Tribune that the laboratory was constructing the world's most powerful supercomputer. Costing $500 million it will have the processing power of 1 quintillion flops. Applications will include the analysis of stars and improvements in the power grid.

Over the course of its history, 13 individuals have served as Argonne Director: 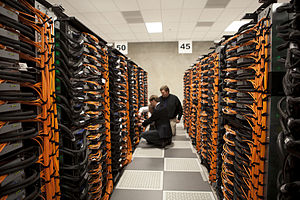 Argonne builds and maintains scientific facilities that would be too expensive for a single company or university to construct and operate. These facilities are used by scientists from Argonne, private industry, academia, other national laboratories and international scientific organizations. 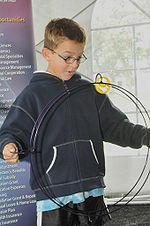 A student examines Argonne's Gyro Wheel at the Open House.

Argonne welcomes all members of the public age 16 or older to take guided tours of the scientific and engineering facilities and grounds. For children under 16, Argonne offers hands-on learning activities suitable for K–12 field trips and scout outings. The laboratory also hosts educational science and engineering outreach for schools in the surrounding area.

Argonne scientists and engineers take part in the training of nearly 1,000 college graduate students and post-doctoral researchers every year as part of their research and development activities.