Short description: Decomposition of an integer as a sum of positive integers 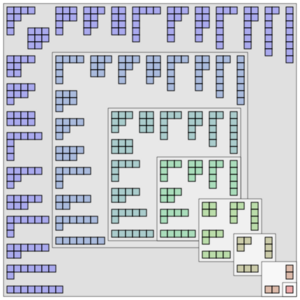 Young diagrams associated to the partitions of the positive integers 1 through 8. They are arranged so that images under the reflection about the main diagonal of the square are conjugate partitions. 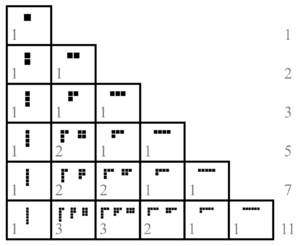 In number theory and combinatorics, a partition of a positive integer n, also called an integer partition, is a way of writing n as a sum of positive integers. Two sums that differ only in the order of their summands are considered the same partition. (If order matters, the sum becomes a composition.) For example, 4 can be partitioned in five distinct ways:

A summand in a partition is also called a part. The number of partitions of n is given by the partition function p(n). So p(4) = 5. The notation λ ⊢ n means that λ is a partition of n.

Partitions can be graphically visualized with Young diagrams or Ferrers diagrams. They occur in a number of branches of mathematics and physics, including the study of symmetric polynomials and of the symmetric group and in group representation theory in general.

The seven partitions of 5 are:

Some authors treat partitions as the sequence of summands, rather than as an expression with plus signs. For example, the partition 2 + 2 + 1 might instead be written as the tuple (2, 2, 1) or in the even more compact form (22, 1) where the superscript indicates the number of repetitions of a part.

There are two common diagrammatic methods to represent partitions: as Ferrers diagrams, named after Norman Macleod Ferrers, and as Young diagrams, named after the British mathematician Alfred Young. Both have several possible conventions; here, we use English notation, with diagrams aligned in the upper-left corner.

The 14 circles are lined up in 4 rows, each having the size of a part of the partition. The diagrams for the 5 partitions of the number 4 are shown below:

while the Ferrers diagram for the same partition is

While this seemingly trivial variation does not appear worthy of separate mention, Young diagrams turn out to be extremely useful in the study of symmetric functions and group representation theory: filling the boxes of Young diagrams with numbers (or sometimes more complicated objects) obeying various rules leads to a family of objects called Young tableaux, and these tableaux have combinatorial and representation-theoretic significance.[1] As a type of shape made by adjacent squares joined together, Young diagrams are a special kind of polyomino.[2]

Using Euler's method to find p(40): A ruler with plus and minus signs (grey box) is slid downwards, the relevant parts added or subtracted. The positions of the signs are given by differences of alternating natural (blue) and odd (orange) numbers. In the SVG file, hover over the image to move the ruler.

The generating function of [math]\displaystyle{ p }[/math] is

No closed-form expression for the partition function is known, but it has both asymptotic expansions that accurately approximate it and recurrence relations by which it can be calculated exactly. It grows as an exponential function of the square root of its argument.[3] The multiplicative inverse of its generating function is the Euler function; by Euler's pentagonal number theorem this function is an alternating sum of pentagonal number powers of its argument.

In both combinatorics and number theory, families of partitions subject to various restrictions are often studied.[5] This section surveys a few such restrictions.

Proof (outline): The crucial observation is that every odd part can be "folded" in the middle to form a self-conjugate diagram:

One can then obtain a bijection between the set of partitions with distinct odd parts and the set of self-conjugate partitions, as illustrated by the following example:

Among the 22 partitions of the number 8, there are 6 that contain only odd parts:

For every type of restricted partition there is a corresponding function for the number of partitions satisfying the given restriction. An important example is q(n). The first few values of q(n) are (starting with q(0)=1):

The pentagonal number theorem gives a recurrence for q:[12]

One recovers the function p(n) by

One possible generating function for such partitions, taking k fixed and n variable, is

More generally, if T is a set of positive integers then the number of partitions of n, all of whose parts belong to T, has generating function

The asymptotic growth rate for p(n) is given by

was first obtained by G. H. Hardy and Ramanujan in 1918 and independently by J. V. Uspensky in 1920. A complete asymptotic expansion was given in 1937 by Hans Rademacher.

If A is a set of natural numbers, we let pA(n) denote the number of partitions of n into elements of A. If A possesses positive natural density α then

and conversely if this asymptotic property holds for pA(n) then A has natural density α.[16] This result was stated, with a sketch of proof, by Erdős in 1942.[17][18]

If A is a finite set, this analysis does not apply (the density of a finite set is zero). If A has k elements whose greatest common divisor is 1, then[19]

Partitions in a rectangle and Gaussian binomial coefficients

One may also simultaneously limit the number and size of the parts. Let p(N, M; n) denote the number of partitions of n with at most M parts, each of size at most N. Equivalently, these are the partitions whose Young diagram fits inside an M × N rectangle. There is a recurrence relation

obtained by observing that [math]\displaystyle{ p(N,M;n) - p(N,M-1;n) }[/math] counts the partitions of n into exactly M parts of size at most N, and subtracting 1 from each part of such a partition yields a partition of n − M into at most M parts.[20]

The Gaussian binomial coefficient is defined as:

The Gaussian binomial coefficient is related to the generating function of p(N, M; n) by the equality

The Durfee square has applications within combinatorics in the proofs of various partition identities.[21] It also has some practical significance in the form of the h-index.

A different statistic is also sometimes called the rank of a partition (or Dyson rank), namely, the difference [math]\displaystyle{ \lambda_k - k }[/math] for a partition of k parts with largest part [math]\displaystyle{ \lambda_k }[/math]. This statistic (which is unrelated to the one described above) appears in the study of Ramanujan congruences.

There is a natural partial order on partitions given by inclusion of Young diagrams. This partially ordered set is known as Young's lattice. The lattice was originally defined in the context of representation theory, where it is used to describe the irreducible representations of symmetric groups Sn for all n, together with their branching properties, in characteristic zero. It also has received significant study for its purely combinatorial properties; notably, it is the motivating example of a differential poset.