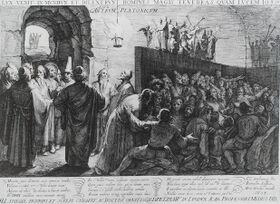 Plato's Allegory of the Cave by Jan Saenredam, according to Cornelis van Haarlem, 1604, Albertina, Vienna

The Allegory of the Cave, or Plato's Cave, was presented by the Ancient Greece philosopher Plato in his work Republic (514a–520a) to compare "the effect of education (παιδεία) and the lack of it on our nature". It is written as a dialogue between Plato's brother Glaucon and his mentor Socrates, narrated by the latter. The allegory is presented after the analogy of the sun (508b–509c) and the analogy of the divided line (509d–511e). All three are characterized in relation to dialectic at the end of Books VII and VIII (531d–534e).

Plato has Socrates describe a group of people who have lived chained to the wall of a cave all of their lives, facing a blank wall. The people watch shadows projected on the wall from objects passing in front of a fire behind them, and give names to these shadows. The shadows are the prisoners' reality. Socrates explains how the philosopher is like a prisoner who is freed from the cave and comes to understand that the shadows on the wall are not reality at all, for he can perceive the true form of reality rather than the manufactured reality that is the shadows seen by the prisoners. The inmates of this place do not even desire to leave their prison, for they know no better life. The prisoners manage to break their bonds one day, and discover that their reality was not what they thought it was. They discovered the sun, which Plato uses as an analogy for the fire that man cannot see behind. Like the fire that cast light on the walls of the cave, the human condition is forever bound to the impressions that are received through the senses. Even if these interpretations (or, in Kantian terminology, intuitions) are an absurd misrepresentation of reality, we cannot somehow break free from the bonds of our human condition—we cannot free ourselves from phenomenal state just as the prisoners could not free themselves from their chains. If, however, we were to miraculously escape our bondage, we would find a world that we could not understand—the sun is incomprehensible for someone who has never seen it. In other words, we would encounter another "realm", a place incomprehensible because, theoretically, it is the source of a higher reality than the one we have always known; it is the realm of pure Form, pure fact.[1] 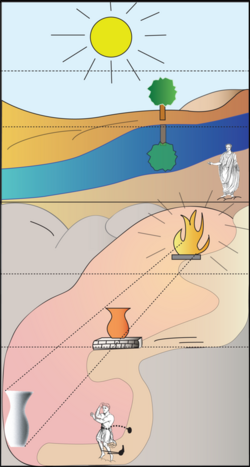 Imprisonment in the cave

Plato begins by having Socrates ask Glaucon to imagine a cave where people have been imprisoned from birth. These prisoners are chained so that their legs and necks are fixed, forcing them to gaze at the wall in front of them and not look around at the cave, each other, or themselves (514a–b).[3] Behind the prisoners is a fire, and between the fire and the prisoners is a raised walkway with a low wall, behind which people walk carrying objects or puppets "of men and other living things" (514b).[3] The people walk behind the wall so their bodies do not cast shadows for the prisoners to see, but the objects they carry do ("just as puppet showmen have screens in front of them at which they work their puppets" (514a)[3]). The prisoners cannot see any of what is happening behind them, they are only able to see the shadows cast upon the cave wall in front of them. The sounds of the people talking echo off the walls, and the prisoners believe these sounds come from the shadows (514c).[3]

Socrates suggests that the shadows are reality for the prisoners because they have never seen anything else; they do not realize that what they see are shadows of objects in front of a fire, much less that these objects are inspired by real things outside the cave which they do not see (514b-515a).[3]

Departure from the cave

Plato then supposes that one prisoner is freed. This prisoner would look around and see the fire. The light would hurt his eyes and make it difficult for him to see the objects casting the shadows. If he were told that what he is seeing is real instead of the other version of reality he sees on the wall, he would not believe it. In his pain, Plato continues, the freed prisoner would turn away and run back to what he is accustomed to (that is, the shadows of the carried objects). He writes "... it would hurt his eyes, and he would escape by turning away to the things which he was able to look at, and these he would believe to be clearer than what was being shown to him."[3]

Plato continues: "Suppose... that someone should drag him... by force, up the rough ascent, the steep way up, and never stop until he could drag him out into the light of the sun."[3] The prisoner would be angry and in pain, and this would only worsen when the radiant light of the sun overwhelms his eyes and blinds him.[3]

"Slowly, his eyes adjust to the light of the sun. First he can only see shadows. Gradually he can see the reflections of people and things in water and then later see the people and things themselves. Eventually, he is able to look at the stars and moon at night until finally he can look upon the sun itself (516a)."[3] Only after he can look straight at the sun "is he able to reason about it" and what it is (516b).[3] (See also Plato's Analogy of the Sun, which occurs near the end of The Republic, Book VI.[4])

Return to the cave

Plato continues, saying that the freed prisoner would think that the world outside the cave was superior to the world he experienced in the cave; "he would bless himself for the change, and pity [the other prisoners]" and would want to bring his fellow cave dwellers out of the cave and into the sunlight (516c).[3]

The returning prisoner, whose eyes have become accustomed to the sunlight, would be blind when he re-enters the cave, just as he was when he was first exposed to the sun (516e).[3] The prisoners, according to Plato, would infer from the returning man's blindness that the journey out of the cave had harmed him and that they should not undertake a similar journey. Plato concludes that the prisoners, if they were able, would therefore reach out and kill anyone who attempted to drag them out of the cave (517a).[3] 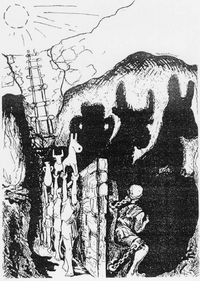 Themes in the allegory appearing elsewhere in Plato's work

The allegory is probably related to Plato's theory of Forms, according to which the "Forms" (or "Ideas"), and not the material world known to us through sensation, possess the highest and most fundamental kind of reality. Only knowledge of the Forms constitutes real knowledge or what Socrates considers "the good".[5] Socrates informs Glaucon that the most excellent people must follow the highest of all studies, which is to behold the Good. Those who have ascended to this highest level, however, must not remain there but must return to the cave and dwell with the prisoners, sharing in their labors and honors.

Plato's Phaedo contains similar imagery to that of the allegory of the Cave; a philosopher recognizes that before philosophy, his soul was "a veritable prisoner fast bound within his body... and that instead of investigating reality of itself and in itself is compelled to peer through the bars of a prison."[6]

Scholars debate the possible interpretations of the allegory of the Cave, either looking at it from an epistemological standpoint – one based on the study of how Plato believes we come to know things – or through a political (Politeia) lens.[6] Much of the scholarship on the allegory falls between these two perspectives, with some completely independent of either. The epistemological view and the political view, fathered by Richard Lewis Nettleship and A.S. Ferguson respectively, tend to be discussed most frequently.[6] Nettleship interprets the allegory of the cave as representative of our innate intellectual incapacity, in order to contrast our lesser understanding with that of the philosopher, as well as an allegory about people who are unable or unwilling to seek truth and wisdom.[7] Ferguson, on the other hand, bases his interpretation of the allegory on the claim that the cave is an allegory of human nature and that it symbolizes the opposition between the philosopher and the corruption of the prevailing political condition.[7][8]

Cleavages have emerged within these respective camps of thought, however. Much of the modern scholarly debate surrounding the allegory has emerged from Martin Heidegger's exploration of the allegory, and philosophy as a whole, through the lens of human freedom in his book The Essence of Human Freedom: An Introduction to Philosophy and The Essence of Truth: On Plato's Cave Allegory and Theaetetus.[8] In response, Hannah Arendt, an advocate of the political interpretation of the allegory, suggests that through the allegory, Plato "wanted to apply his own theory of ideas to politics".[9] Conversely, Heidegger argues that the essence of truth is a way of being and not an object.[10] Arendt criticised Heidegger's interpretation of the allegory, writing that "Heidegger…is off base in using the cave simile to interpret and 'criticize' Plato's theory of ideas".[9]

The themes and imagery of Plato's cave have appeared throughout Western thought and culture. Some examples include:

The following is a list of supplementary scholarly literature on the Allegory of the Cave that includes articles from epistemological, political, alternative, and independent viewpoints on the allegory: