Short description: Epithet for god, lord, blessed one in Hinduism and Buddhism

Bhagavan (Sanskrit: भगवान्, romanized: Bhagavān; Pali: Bhagavā), also spelt Bhagwan (sometimes translated in English as "Lord"), is an epithet within Indian religions used to denote figures of religious worship. In Hinduism it is used to signify a deity or an avatar, particularly for Krishna and Vishnu in Vaishnavism, Shiva in Shaivism and Durga or Adi Shakti in Shaktism.[1][2] In Jainism the term refers to the Tirthankaras, particularly Mahavira, and in Buddhism to the Buddha.[3]

In many parts of India and South Asia, Bhagavan represents the abstract concept of a universal God to Hindus who are spiritual and religious but do not worship a specific deity.[1]

In bhakti school literature, the term is typically used for any deity to whom prayers are offered. A particular deity is often the devotee's one and only Bhagavan.[2] The female equivalent of Bhagavān is Bhagavati.[4][5] To some Hindus, the word Bhagavan is an abstract, genderless concept of God.

In Buddhism's Pali and Sanskrit scriptures, the term is used to denote Gautama Buddha, referring him as Bhagavā or Bhagavān (translated with the phrase "Lord" or "The Blessed One").[6][7] The term Bhagavan is also found in other Theravada, Mahayana and Tantra Buddhist texts.[8][9]

The same text defines Bhaga and provides the etymological roots as follows as translated by Wilson,[12]

Knowledge is of two kinds, that which is derived from scripture, and that which is derived from reflection. Brahma that is the word is composed of scripture; Brahma that is supreme is produced of reflection. Ignorance is utter darkness, in which knowledge, obtained through any sense (as that of hearing), shines like a lamp; but the knowledge that is derived from reflection breaks upon the obscurity like the sun. (...) That which is imperceptible, undecaying, inconceivable, unborn, inexhaustible, indescribable; which has neither form, nor hands, nor feet; which is almighty, omnipresent, eternal; the cause of all things, and without cause; permeating all, itself unpenetrated, and from which all things proceed; that is the object which the wise behold, that is Brahma, that is the supreme state, that is the subject of contemplation to those who desire liberation, that is the thing spoken of by the Vedas, the infinitely subtle, supreme condition of Vishnu.

That essence of the supreme is defined by the term Bhagavat. The word Bhagavat is the denomination of that primeval and eternal God: and he who fully understands the meaning of that expression is possessed of holy wisdom, the sum, and substance of the Vedas. The word Bhagavat is a convenient form to be used in the adoration of that supreme being, to whom no term is applicable; and therefore Bhagavat expresses that supreme spirit, which is individual, almighty, and the cause of causes of all things. The letter Bh implies the cherisher and supporter of the universe. By ga is understood the leader, impeller, or creator. The disyllable Bhaga indicates the six properties, dominion, might, glory, splendor, wisdom, and dispassion. The purport of the letter va is that elemental spirit in which all beings exist, and which exists in all beings. And thus this great word Bhagavan is the name of Vásudeva, who is one with the supreme Brahma, and of no one else. This word, therefore, which is the general denomination of an adorable object, is not used in reference to the supreme in a general, but a special signification. When applied to any other (thing or person) it is used in its customary or general import. In the latter case, it may purport one who knows the origin and end and revolutions of beings, and what is wisdom, what ignorance. In the former, it denotes wisdom, energy, power, dominion, might, glory, without end, and without defect.

Bhagavan is related to the root Bhaj (भज्, "to revere", "adore"), and implies someone "glorious", "illustrious", "revered", "venerable", "divine", "holy" (an epithet applied to gods, holy or respectable personages).[13] The root Bhaj also means "share with", "partake of", "aportion".[14][15] Clooney and Stewart state that this root, in Vaishnava traditions, implies Bhagavan as one perfect creator that a devotee seeks to partake from, share his place with, by living in god, in the way of god, the loving participation between the two being its own reward.

Buddha is referred to as Bhagavan in ancient and medieval Theravada, Mahayana and Tantra Buddhist texts, where it connotes, "Lord", "Blessed One", "Fortunate One".[9][16][17]

The Vedic texts neither mention nor provide a basis to explain the origin of the Bhagavān concept.[18]

The root of "Bhagavan", "Bhaga" is mentioned in the Mundaka Upanishad, but it does not mean or imply "Bhagavan"':

Shaunaka asked: Can knowledge of the world's reality be so complete that all the many things we see are understood in it?
Can something so complete, excellent be found that knowing it, one knows everything?
– Mundaka Upanishad I.1.3 [19][20]

The Mundaka Upanishad then answers this question in two parts over verses 1.1.4 through 3.2.11.[21] These verses split knowledge into two sections: lower knowledge and higher knowledge. Lower knowledge includes Vedas, phonetics, grammar, etymology, meter, astronomy and ceremony rituals.[22] The higher knowledge indicates, the Upanishad asserts, is Self-knowledge and realizing its oneness with Brahman—the one which cannot be seen, nor seized, which has no origin, no qualities, no hips, nor ears, no hands, nor feet, one that is the eternal, all-pervading, infinitesimal, imperishable. The word Bhagavan does not appear in the Mundaka Upanishad and other early or middle Upanishads.[2]

Later and medieval era Upanishads mention Bhagavān. For example, the very first verse of the Kali-Saṇṭāraṇa Upaniṣhad uses the term, as follows,[23]

At the start of the Dvapara [Yuga] Narada went to Brahma and asked, "O Lord, how shall I, roaming over the earth, be able to overcome the effects of Kali [Yuga]?"

Kali-Saṇṭāraṇa, a minor Upanishad, then proceeds to disclose, among other things, two Bhagavan names in the Hare Krishna mantra in verse 2.[24] This verse is sung by International Society for Krishna Consciousness (ISKCON) devotees.[23]

In Bhagavata Dharma, it denotes Narayana Vasudeva's four vyuha formations. Ishvara or God is called Bhagavan and the person dedicated to Bhagavan is called a Bhagavata. The Bhagavata Purana (I.iii.28) identifies Krishna as Narayana, Vāsudeva, Vishnu and Hari—Bhagavan present in human form.[25] Bhagavan is the complete revelation of the Divine; Brahman, the impersonal Absolute, is unqualified and therefore, never expressed. Paramatman is Bhagavan in relation to Prakṛti and the Jiva.[26] The Yoga of Devotion implies that if a Bhagavata, the devotee of Bhagavan, seeks and longs for Bhagavan, then Bhagavan too seeks his devotee in equal measure.[27]

The term Bhagavan appears extensively in the Bhagavad Gita, as Krishna counsels Arjuna.[2] For example,

Shri Bhagavan said, "from where had this weakness arisen, at this inconvenient time?
It is not noble, neither will it lead you to heaven, nor will it earn you valor, O Arjuna.

The Bhāgavat traditions of Hinduism invoke Bhagavan in Narayan Upakheyam and in the Bhagavad Gita of Bhishma Parva of the Mahabharata. The devotion to Lord Vishnu (identified as Vasudeva in Mahabharata) is described as ten incarnations of Vishnu. It[clarification needed] introduced the Chatur – vyuha concept and laid emphasis on the worship of five Vrisini-warriors, reached the peak of its popularity during the Gupta Period.[29]

In Hinduism, the word, Bhagavān, indicates the Supreme Being or Absolute Truth conceived as a Personal God.[30] This personal feature indicated by the word Bhagavān differentiates its usage from other similar terms[31] such as Brahman, the "Supreme Spirit" or "spirit", and thus, in this usage, Bhagavan is analogous to the Christian concept of God the Father. In Vaisnavism, a devotee of Bhagvān Krishna is called a Bhāgavata.

The Bhagavata Purana (1.2.11) states the definition of Bhagavān to mean the supreme most being:

Bhagavān used as a title of veneration is often directly used as Lord, as in Bhagavān Rama, Bhagavān Krishna, Bhagavān Shiva, etc. In Buddhism and Jainism, Gautama Buddha, Mahavira and other Tirthankaras, Buddhas and bodhisattvas are also venerated with this title. The feminine of Bhagavat is Bhagawatī and is an epithet of Durga and other goddesses. This title is also used by a number of contemporary spiritual teachers in India who claim to be Bhagavan or have realized impersonal Brahman.

Bhakti (devotion to God) consists of actions performed dedicated to the Paramatman, the individuated existence which has free-will and who is the final cause of the world; the Vedic Rishis describe the goals originated from God as Bhagavān, the Ananda aspect of God where God has manifested His personality is called Bhagavān when consciousness (pure self-awareness) aligns with those goals to cause the unified existence and commencement of works follow.[32]

Bhagava is the Pali word used for Bhagavan. Some Buddhist texts, such as the Pali suttas, use the word Bhagavā for the Buddha, meaning "the fortunate one".[33] The term Bhagavā has been used in Pali Anussati or recollections[clarification needed] as one of the terms that describes the "Tathāgata" as one full of good qualities, as arahant, sammā-sambuddho and sugato (Dīgha Nikāya II.93).[34]

Bhagavan is one of the nine qualities of the Buddha. In the Buddha Anussati, Bhagavan is defined the following way:

Thus is the Buddha, deserving homage, perfectly awakened, perfect in true knowledge and conduct, well gone to Nibbana, knower of the worlds, incomparable leader (lit. charioteer) of persons to be tamed, teacher of gods and humans, awakened one and Blessed One.

Several Tibetan Buddhist tantra texts use the word Bhagavān. For example, the Pradipoddyotana manuscript of Guhyasamāja tantra-Samdhivyakarana uses the word Bhagavān, which Alex Wayman translates as "Lord".[17] The text, elsewhere refers to "Bhagavan Sarvatathagatakayavakcittadipatih", which John Campbell translates as "Lord, Master of the Vajras of Body, Speech, and Mind of all Buddhas."[35] Elsewhere, it states,[8]

Laṅkāvatāra Sūtra, a sutra of Mahāyāna Buddhism, for example, uses the word Bhagavān over three hundred times, which is either left untranslated by scholars, or translated as "Lord or Blessed One".[36] The devotional meditational text Sukhavati Vyuhopadesa by Vasubandhu uses the term Bhagavān in its invocations.[37]

Other variants of the term Bhagavan, such Bhagavant and Bhagavata can also be found throughout Buddhist texts. For instance, it is used in the initial chant, which is recited before almost every Sutta chanting,

I honour to that Bhagavan, who is Arhat and a fully-enlightened Buddha

The term Bhagavān is found in liturgical practices of Theravada Buddhism, where it is used as an epithet that means the "Blessed One". Examples of such usage is found in Sri Lanka's Bodhi Puja (or Atavisi Buddha Puja, Worship of the Twenty Eight Buddhas).[38]

The word Bhagavan is the most common word for the Buddhist texts to refer to the Buddha. For example, almost every sutra in Buddhist canonical and commentarial texts starts with the line like

Thus have I heard - Once the Bhagavan was dwelling in Savatthi, at the Anathpindaka's monastery in Jetavana. (English Translation) 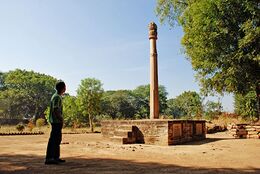 Heliodorus Khamba (pillar) in the Indian state of Madhya Pradesh. Installed about 100 BCE, the pillar's Brahmi-script inscription states that Heliodorus is a Bhagvatena (devotee) of Vishnu.[39]

A word derived from Bhagavan is documented epigraphically from around 100 BCE, such as in the inscriptions of the Heliodorus pillar; in which Heliodorus, an Indo-Greek ambassador from Taxila to the court of a Shunga king, addresses himself as a Bhagvatena (devotee) of Vishnu. ("Heliodorena Bhagavata", Archaeological Survey of India, Annual Report (1908-1909)):[40]

This Garuda-standard of Vasudeva (Vishnu), the God of Gods was erected here by the Bhagavatena (devotee) Heliodoros, the son of Dion, a man of Taxila, sent by the Great Greek (Yona) King Antialcidas, as ambassador to King Kasiputra Bhagabhadra, the Savior son of the princess from Benares, in the fourteenth year of his reign."[lower-alpha 2]

Sākamunisa bhagavato is recorded in the kharoshthi dedication of a vase placed in a Buddhist stupa by the Greek meridarch (civil governor of a province) named Theodorus:[41]

James Prinsep identified several engravings and inscriptions on ancient Buddhist artifacts that include the word Bhagavan and related words. For example,[43]