Philosophy:From the Caves and Jungles of Hindostan

From the Caves and Jungles of Hindostan: Letters to the Homeland (Pre-reform Russian: «Изъ пеще́ръ и де́брей Индоста́на: пи́сьма на ро́дину»; tr. Iz peshcher i debrei Indostana: pis'ma na rodinu) is a literary work by the founder of the Theosophical Society Helena Blavatsky.[note 1] She published it under the pen name Radda Bai in serial installments (letters) from 1879 to 1886 in Moscow in the periodicals Moskovskiya Vedomosti and Russkiy Vestnik, edited by Mikhail Katkov.(Cranston, 1993) The first part of these letters was published in a single volume in 1883 as an appendix to the journal Russkiy Vestnik.[2][note 2] The second part of the letters was published in 1884–1886.[4] The series obviously was never finished as it broke off rather suddenly.[note 3]

The Russian literary critic Zinaida Vengerova noted that this Blavatsky's book has "somewhat a mystical coloring" due to numerous stories and the author's arguments about the secret wisdom of the Hindus, which does not detract from its literary significance. The close acquaintance of the writer with the Indian sights allows her to be very entertaining to talk about the "most diverse aspects of the life" in modern and ancient India. Simply, "but very artistically," she describes the covering India from immemorial times magnificent buildings, on which the past millenniums had no influence.[4]

"Especially she is being occupied a mysterious sect of raj-yogis, the holy sages, who, through the special exertion of their spiritual forces, something like a long spiritual gymnastics, reach the ability to perform undoubted miracles: so, Blavatsky's personally acquaintance raj-yogi Gulab-Singh[note 4][note 5] had been answering the questions which Blavatsky was demanding only mentally, had been disappearing and appearing completely unexpectedly for everyone, had been opening to them in the mountains the mysterious entrances through which they were entering the marvelous underground temples, etc."[8][note 6]

Senkevich wrote that these essays by Blavatsky had a "stunning success" in Russia. He stated that Blavatsky demonstrates in this work an enviable erudition and liveliness of the mind. In a sense, her book is a country-specific encyclopaedia, which and "to this day has not lost its scientific value."[note 7] The author's desire to disclose India "from within," through people with whom she was throwed by her fate, gives the book, in comparison with the usual travel essays, a "special, completely new character of the psychological document reflecting many facets of the Indian spiritual world, the specificity of the life of traditional Indian society." The book gives also an objective assessment of the English colonial rule, all the more important because it contains the condemnation of the Englishmen living in India, despite the "truthful, depressing descriptions of atrocities" against them by the participants the Sepoy uprising (1857–1859).[11]

According to Senkevich, Blavatsky expresses her indignation at the English colonial orders, contempt for the pleasures and amusements of the British officials and the Anglo-Indians, who served them, "in a sarcastic and vitriolic manner," and the reader, empathizing with her "violent emotions, willy-nilly takes her side." She took into account the stereotypes of the average Russian reader's thinking, his "phobias, geopolitical views and cultural predilections."[12] Here is one example of her emotional reasoning on the subject of the English suspiciousness and jealousy:

"This national characteristic of the English to shout: 'Help, they are killing us!' when nobody even thinks of touching them, is disgusting… But if this trait is notable even in England, how much more so is it in India? Here suspicion has become a monomania. Anglo-Indians see Russian spies even in their own shoes, and this drives them to madness… They watch every new arrival from one province to another, even should he be an Englishman. People have been deprived not only of every weapon, but of all knives and axes. The peasant can hardly chop his wood, or protect himself from a tiger. But the English are still afraid. It is true that here there are but 60,000 of them, while the native population numbers 245 million. And their system which they took over from successful animal-tamers, is good only until the animal senses his tamer is fearful in his turn… Then his hour has come! At all events, such a manifestation of chronic fear merely admits a recognition of one's own weakness."(Blavatsky, 1975)

Vera Johnston, the first translator of the work, wrote that author's manuscript "was often incorrect; often obscure." The Russian editors, though they did their best to transfer faithfully the Indian names and places, "often produced, through their ignorance of Oriental tongues, forms which are strange, and sometimes unrecognizable."[13]

"The proof-sheets were never corrected by the author, who was then in India; and, in consequence, it has been impossible to restore all the local and personal names to their proper form. A similar difficulty has arisen with reference to quotations and cited authorities, all of which have gone through a double process of refraction: first into Russian, then into English."[14]

Solovyov noted that Blavatsky was in her lifetime very troubled that the English should not know contents of the book, "as she wrote for Russian readers, and was not sparing of ridicule and censure against the Anglo-Indian Government and its representatives."[15] He claimed also that the reader of the book must look on it as "romance and fancy, and must on no account take on trust the facts and statements" given by Blavatsky because "most bitter disenchantment awaits the too trustful reader."[16] Murphet wrote that Blavatsky's work is "a highly imaginative concoction of fact-and-fiction, written in a style that established her literary reputation with Russian editors."[17]

According to Senkevich, in the 1870s and 1880s, a lot of materials appeared in Russian magazines and newspapers, the keynote being the "idea of a Russian war campaign to India." The writer's fame of Blavatsky has been created in the "wake of this propaganda hype."[18] 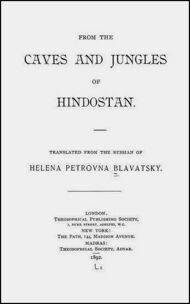 This work has been translated into English two times. The first translation appeared in 1892 in London[2] but was not complete. It was done by Vera Johnston, Blavatsky's niece.[22] A new 1975 translation by Boris de Zirkoff (also Blavatsky's relative) is now available in author's Collected Writings series.[23] Subsequently, the book was repeatedly reprinted, in English, Russian and Spanish.[24][note 8][note 9]