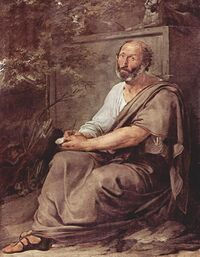 Moderate realism is opposed to both extreme realism (such as the theory of Platonic forms) and nominalism. Nominalists deny the existence of universals altogether, even as particularised and multiplied within particulars. Moderate realism, however, is considered a midpoint between Platonic realism and nominalism as it holds that the universals are located in space and time although they do not have separate realms.[1]

Aristotle espoused a form of moderate realism as did Thomas Aquinas, Bonaventure, and Duns Scotus (cf. Scotist realism).[2] Moderate realism is anti-realist about abstract objects, just like conceptualism is (their difference being that conceptualism denies the mind-independence of universals, while moderate realism does not).[3] Aristotle's position, as expounded by Aquinas, denies the existence of the realm of Forms and that the world around constitutes the only world where nothing is existing precisely according to our universal concepts.[4]

A more recent and influential version of immanent realism has been advanced by Willard Van Orman Quine, in works such as "Posits and Reality" (1955),[5] and D. M. Armstrong, in works such as his Universals: An Opinionated Introduction (1989, p. 8). For Quine, any object proposed by theory is considered real, stressing that "everything to which we concede existence is a posit from the standpoint of a description of the theory-building process", considering the idea that the theory withstood rigorous testing.[6] According to Armstrong, universals are independent of the mind and is critical accounting for causation and nomic connection.[7]