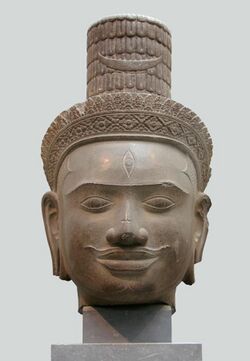 The third eye (also called the mind's eye or inner eye) is a mystical invisible eye, usually depicted as located on the forehead, which provides perception beyond ordinary sight.[1]

In Indian spiritual traditions, the third eye refers to the ajna (or brow) chakra.[2]

The third eye refers to the gate that leads to the inner realms and spaces of higher consciousness. In spirituality, the third eye often symbolizes a state of enlightenment. The third eye is often associated with religious visions, clairvoyance, the ability to observe chakras and auras,[3] precognition, and out-of-body experiences. People who are said to have the capacity to use their third eyes are sometimes known as seers. In Hinduism and Buddhism, the third eye is said to be located around the middle of the forehead, slightly above the junction of the eyebrows, representing the enlightenment one achieves through meditation.[4][5] Hindus also place a "tilaka" between the eyebrows as a representation of the third eye[6] which is also seen on expressions of Shiva.[4] Buddhists regard the third eye as the "eye of consciousness", representing the vantage point from which enlightenment beyond one's physical sight is achieved, and use an urna to the same effect as Hindus.[4]

In Taoism and many traditional Chinese religious sects such as Chan (called Zen in Japanese), "third eye training" involves focusing attention on the point between the eyebrows with the eyes closed, and while the body is in various qigong postures. The goal of this training is to allow students to tune into the correct "vibration" of the universe and gain a solid foundation on which to reach a more advanced meditative state. Taoism teaches that the third eye, also called the mind's eye, is situated between the two physical eyes, and expands up to the middle of the forehead when opened. Taoism asserts that the third eye is one of the main energy centers of the body located at the sixth Chakra, forming a part of the main meridian, the line separating left and right hemispheres of the body.[7] In Taoist alchemical traditions, the third eye is the frontal part of the "Upper Dan Tien" (upper cinnabar field) and is given the evocative name "muddy pellet".

Adherents of theosophist H. P. Blavatsky have suggested that the third eye is in fact the partially dormant pineal gland, which resides between the two hemispheres of the brain.[8] Reptiles and amphibians sense light via a third parietal eye—a structure associated with the pineal gland—which serves to regulate their circadian rhythms, and for navigation, as it can sense the polarization of light. C. W. Leadbeater thought that by extending an "etheric tube" from the third eye, it is possible to develop microscopic and telescopic vision.[3] It has been asserted by Stephen Phillips that the third eye's microscopic vision is capable of observing objects as small as quarks.[9] According to this belief, humans had in far ancient times an actual third eye in the back of the head with a physical and spiritual function. Over time, as humans evolved, this eye atrophied and sunk into what today is known as the pineal gland.[10] Rick Strassman has hypothesized that the pineal gland, which maintains light sensitivity, is responsible for the production and release of DMT (dimethyltryptamine), an entheogen which he believes possibly could be excreted in large quantities at the moments of birth and death.[11]

The use of the phrase mind's eye does not imply that there is a single or unitary place in the mind or brain where visual consciousness occurs. Philosopher Daniel Dennett has critiqued this view.[12]

The 1956 novel The Third Eye by Lobsang Rampa (born Cyril Henry Hoskin, 1910–1981, a native of Plympton, Devonshire) introduced a fictional account of the third eye for the first time to a wide popular audience of English-speaking readers.

In the Dragon Ball series, the character Tien Shinhan is depicted with a third eye. Tien himself is based on Erlang Shen—a three-eyed Taoist deity and character in the Chinese classic Journey to the West. Tien obtained his third eye from years of intense meditation, but lost most of its powers due to being raised and corrupted by the villainous Master Shen.

In the Japanese anime / manga series YuYu Hakusho, one of the protagonist's core allies, a demon named Hiei has a physical third eye / Evil Eye (邪眼, Jagan, referred to as the "Jagan Eye" in the English anime), surgically implanted into his forehead in order to use its psychic powers to aid in his search for his lost sister. The Jagan gives him clairvoyance and allows him to control lesser demons and humans with only a glance. The procedure is depicted as being extremely painful with few being able to withstand the pain of both the surgery and accompanying psychic adjustment to control the power of the Jagan.[13]