Short description: Difference between ideal and observed gravitational acceleration at a location

The gravity anomaly at a location on the Earth's surface is the difference between the observed value of gravity and the value predicted by a theoretical model. If the Earth were an ideal oblate spheroid of uniform density, then the gravity measured at every point on its surface would be given precisely by a simple formula. However, the Earth has a rugged surface and nonuniform composition, which distorts its gravitational field. The theoretical value of gravity can be corrected for altitude and the effects of nearby terrain, but it usually still differs slightly from the measured value. This gravity anomaly can reveal the presence of subsurface structures of unusual density. For example, a mass of dense ore below the surface will give a positive anomaly due to the increased gravitational attraction of the ore.

A gravity survey is conducted by measuring the gravity anomaly at many locations in a region of interest, using a portable instrument called a gravimeter. Careful analysis of the gravity data allows geologists to make inferences about the subsurface geology.

The gravity anomaly is the difference between the observed acceleration of an object in free fall (gravity) on a planet's surface, and the corresponding value predicted from a model of the planet's gravitational field.[1] Typically the model is based on simplifying assumptions, such as that, under its self-gravitation and rotational motion, the planet assumes the figure of an ellipsoid of revolution.[2] Gravity on the surface of this reference ellipsoid is then given by a simple formula which only contains the latitude. For Earth, the reference ellipsoid is the International Reference Ellipsoid, and the value of gravity predicted for points on the ellipsoid is the normal gravity, gn.[3]

Gravity anomalies were first discovered in 1672, when the French astronomer, Jean Richter, established an observatory on the island of Cayenne. Richter was equipped with a highly precise pendulum clock which had been carefully calibrated at Paris before his departure. However, he found that the clock ran too slowly in Cayenne, compared with the apparent motion of the stars. Fifteen years later, Isaac Newton used his newly formulated universal theory of gravitation to explain the anomaly. Newton showed that the measured value of gravity was affected by the rotation of the Earth, which caused the Earth's equator to bulge out slightly relative to its poles. Cayenne, being nearer the equator than Paris, would be both further from the center of Earth (reducing the Earth's bulk gravitational attraction slightly) and subject to stronger centrifugal acceleration from the Earth's rotation. Both these effects reduce the value of gravity, explaining why Richter's pendulum clock, which depended on the value of gravity, ran too slowly. Correcting for these effects removed most of this anomaly.[4]

The model field and corrections

The normal gravity accounts for the bulk gravitation of the entire Earth, corrected for its idealized shape and rotation. It is given by the formula:

The sun and moon create time-dependent tidal forces that affect the measured value of gravity by about 0.3 mgal. Two-thirds of this is from the moon. This effect is very well understood and can be calculated precisely for a given time and location using astrophysical data and formulas, to yield the tidal correction △gtid.[8]

The free-air anomaly does not take into account the layer of material (after terrain leveling) outside the reference ellipsoid. The gravitational attraction of this layer or plate is taken into account by the Bouguer plate correction, which is -0.0419 × 10−3 ρ h mgal m2 kg−1. The density of crustal rock, ρ, is usually taken to be 2670 kg m3 so the Bouguer plate correction is usually taken as -0.3086 mgal m−1 h. Here h is the elevation above the reference ellipsoid.[13]

Forward modelling is the process of computing the detailed shape of the compensation required by a theoretical model and using this to correct the Bouguer anomaly to yield an isostatic anomaly.[17]

Gravity and geoid anomalies caused by various crustal and lithospheric thickness changes relative to a reference configuration. All settings are under local isostatic compensation with an elevation of either +1000 or -1000 m above the reference level. 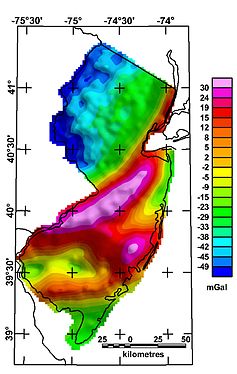 Lateral variations in gravity anomalies are related to anomalous density distributions within the Earth. Local measurements of the gravity of Earth help us to understand the planet's internal structure.

The Bouguer anomaly over continents is generally negative, especially over mountain ranges.[18] For example, typical Bouguer anomalies in the Central Alps are −150 milligals.[19] By contrast, the Bouguer anomaly is positive over oceans. These anomalies reflect the varying thickness of the Earth's crust. The higher continental terrain is supported by thick, low-density crust that "floats" on the denser mantle, while the ocean basins are floored by much thinner oceanic crust. The free-air and isostatic anomalies are small near the centers of ocean basins or continental plateaus, showing that these are approximately in isostatic equilibrium. The gravitational attraction of the high terrain is balanced by the reduced gravitational attraction of its underlying low-density roots. This brings the free-air anomaly, which omits the correction terms for either, close to zero. The isostatic anomaly includes correction terms for both effects, which reduces it nearly to zero as well. The Bouguer anomaly includes only the negative correction for the high terrain and so is strongly negative.[18]

The Bouger anomaly map of the Alps shows additional features besides the expected deep mountain roots. A positive anomaly is associated with the Ivrea body, a wedge of dense mantle rock caught up by an ancient continental collision. The low-density sediments of the Molasse basin produce a negative anomaly. Larger surveys across the region provide evidence of a relict subduction zone.[20] Negative isostatic anomalies in Switzerland correlate with areas of active uplift, while positive anomalies are associated with subsidence.[21]

Over mid-ocean ridges, the free-air anomalies are small and correlate with the ocean bottom topography. The ridge and its flanks appear to be fully isostatically compensated. There is a large Bouger positive, of over 350 mgal, beyond 1,000 kilometers (620 mi) from the ridge axis, which drops to 200 over the axis. This is consistent with seismic data and suggests the presence of a low-density magma chamber under the ridge axis.[22]

There are intense isostatic and free-air anomalies along island arcs. These are indications of strong dynamic effects in subduction zones. The free-air anomaly is around +70 mgal along the Andes coast, and this is attributed to the subducting dense slab. The trench itself is very negative,[23] with values more negative than -250 mgal. This arises from the low-density ocean water and sediments filling the trench.[24]

Local anomalies are used in applied geophysics. For example, a local positive anomaly may indicate a body of metallic ores. Salt domes are typically expressed in gravity maps as lows, because salt has a low density compared to the rocks the dome intrudes.[27]

This section is an excerpt from Gravimetry § Satellite gravimetry[ edit ]