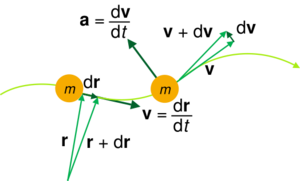 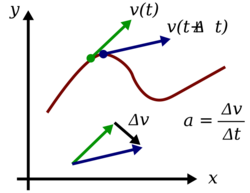 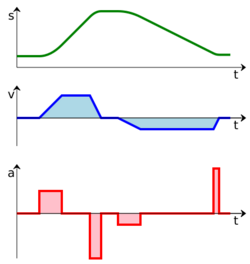 From bottom to top:

(Here and elsewhere, if motion is in a straight line, vector quantities can be substituted by scalars in the equations.)

By the fundamental theorem of calculus, it can be seen that the integral of the acceleration function a(t) is the velocity function v(t); that is, the area under the curve of an acceleration vs. time (a vs. t) graph corresponds to the change of velocity. [math]\displaystyle{ \mathbf{\Delta v} = \int \mathbf{a} \, dt }[/math]

Likewise, the integral of the jerk function j(t), the derivative of the acceleration function, can be used to find the change of acceleration at a certain time: [math]\displaystyle{ \mathbf{\Delta a} = \int \mathbf{j} \, dt }[/math]

An object moving in a circular motion—such as a satellite orbiting the Earth—is accelerating due to the change of direction of motion, although its speed may be constant. In this case it is said to be undergoing centripetal (directed towards the center) acceleration.

Proper acceleration, the acceleration of a body relative to a free-fall condition, is measured by an instrument called an accelerometer.

In classical mechanics, for a body with constant mass, the (vector) acceleration of the body's center of mass is proportional to the net force vector (i.e. sum of all forces) acting on it (Newton’s second law): [math]\displaystyle{ \mathbf{F} = m\mathbf{a} \quad \implies \quad \mathbf{a} = \frac{\mathbf{F}}{m} }[/math] where F is the net force acting on the body, m is the mass of the body, and a is the center-of-mass acceleration. As speeds approach the speed of light, relativistic effects become increasingly large.

An oscillating pendulum, with velocity and acceleration marked. It experiences both tangential and centripetal acceleration. 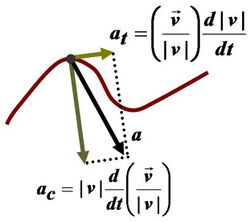 Components of acceleration for a curved motion. The tangential component at is due to the change in speed of traversal, and points along the curve in the direction of the velocity vector (or in the opposite direction). The normal component (also called centripetal component for circular motion) ac is due to the change in direction of the velocity vector and is normal to the trajectory, pointing toward the center of curvature of the path.

The velocity of a particle moving on a curved path as a function of time can be written as: [math]\displaystyle{ \mathbf{v}(t) = v(t) \frac{\mathbf{v}(t)}{v(t)} = v(t) \mathbf{u}_\mathrm{t}(t) , }[/math] with v(t) equal to the speed of travel along the path, and [math]\displaystyle{ \mathbf{u}_\mathrm{t} = \frac{\mathbf{v}(t)}{v(t)} \, , }[/math] a unit vector tangent to the path pointing in the direction of motion at the chosen moment in time. Taking into account both the changing speed v(t) and the changing direction of ut, the acceleration of a particle moving on a curved path can be written using the chain rule of differentiation[5] for the product of two functions of time as:

Geometrical analysis of three-dimensional space curves, which explains tangent, (principal) normal and binormal, is described by the Frenet–Serret formulas.[6][7] 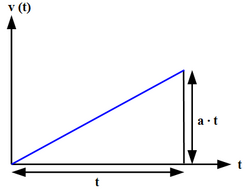 Calculation of the speed difference for a uniform acceleration

Uniform or constant acceleration is a type of motion in which the velocity of an object changes by an equal amount in every equal time period.

A frequently cited example of uniform acceleration is that of an object in free fall in a uniform gravitational field. The acceleration of a falling body in the absence of resistances to motion is dependent only on the gravitational field strength g (also called acceleration due to gravity). By Newton's Second Law the force [math]\displaystyle{ \mathbf{F_g} }[/math] acting on a body is given by: [math]\displaystyle{ \mathbf{F_g} = m \mathbf{g} }[/math]

In particular, the motion can be resolved into two orthogonal parts, one of constant velocity and the other according to the above equations. As Galileo showed, the net result is parabolic motion, which describes, e. g., the trajectory of a projectile in a vacuum near the surface of Earth.[9]

Velocity vector v, always tangent to the path of motion.

Acceleration vector a, not parallel to the radial motion but offset by the angular and Coriolis accelerations, nor tangent to the path but offset by the centripetal and radial accelerations.
Kinematic vectors in plane polar coordinates. Notice the setup is not restricted to 2d space, but may represent the osculating plane plane in a point of an arbitrary curve in any higher dimension.

In uniform circular motion, that is moving with constant speed along a circular path, a particle experiences an acceleration resulting from the change of the direction of the velocity vector, while its magnitude remains constant. The derivative of the location of a point on a curve with respect to time, i.e. its velocity, turns out to be always exactly tangential to the curve, respectively orthogonal to the radius in this point. Since in uniform motion the velocity in the tangential direction does not change, the acceleration must be in radial direction, pointing to the center of the circle. This acceleration constantly changes the direction of the velocity to be tangent in the neighboring point, thereby rotating the velocity vector along the circle.

Expressing centripetal acceleration vector in polar components, where [math]\displaystyle{ \mathbf{r} }[/math] is a vector from the centre of the circle to the particle with magnitude equal to this distance, and considering the orientation of the acceleration towards the center, yields [math]\displaystyle{ \mathbf {a_c}= -\frac{v^2}{|\mathbf {r}|}\cdot \frac{\mathbf {r}}{|\mathbf {r}|}\,. }[/math]

This acceleration and the mass of the particle determine the necessary centripetal force, directed toward the centre of the circle, as the net force acting on this particle to keep it in this uniform circular motion. The so-called 'centrifugal force', appearing to act outward on the body, is a so-called pseudo force experienced in the frame of reference of the body in circular motion, due to the body's linear momentum, a vector tangent to the circle of motion.

The special theory of relativity describes the behavior of objects traveling relative to other objects at speeds approaching that of light in a vacuum. Newtonian mechanics is exactly revealed to be an approximation to reality, valid to great accuracy at lower speeds. As the relevant speeds increase toward the speed of light, acceleration no longer follows classical equations.

As speeds approach that of light, the acceleration produced by a given force decreases, becoming infinitesimally small as light speed is approached; an object with mass can approach this speed asymptotically, but never reach it.

Unless the state of motion of an object is known, it is impossible to distinguish whether an observed force is due to gravity or to acceleration—gravity and inertial acceleration have identical effects. Albert Einstein called this the equivalence principle, and said that only observers who feel no force at all—including the force of gravity—are justified in concluding that they are not accelerating.[10]