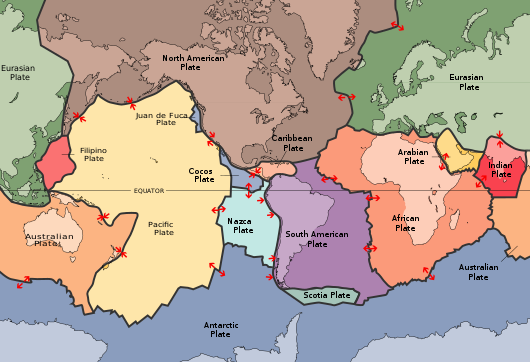 The tectonic plates of the lithosphere on Earth 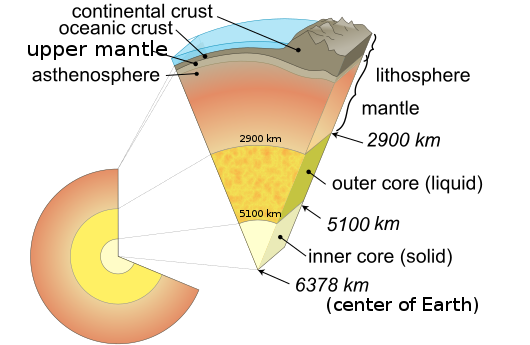 Earth cutaway from center to surface, the lithosphere comprising the crust and lithospheric mantle (detail not to scale)

A lithosphere (Ancient Greek: [líthos] for "rocky", and σφαίρα [sphaíra] for "sphere") is the rigid,[1] outermost shell of a terrestrial-type planet or natural satellite. On Earth, it is composed of the crust and the portion of the upper mantle that behaves elastically on time scales of up to thousands of years or more. The crust and upper mantle are distinguished on the basis of chemistry and mineralogy.

Earth's lithosphere, which constitutes the hard and rigid outer vertical layer of the Earth, includes the crust and the uppermost mantle. The lithosphere is underlain by the asthenosphere which is the weaker, hotter, and deeper part of the upper mantle. The Lithosphere-Asthenosphere boundary is defined by a difference in response to stress: the lithosphere remains rigid for very long periods of geologic time in which it deforms elastically and through brittle failure, while the asthenosphere deforms viscously and accommodates strain through plastic deformation.

The thickness of the lithosphere is thus considered to be the depth to the isotherm associated with the transition between brittle and viscous behavior.[2] The temperature at which olivine becomes ductile (~1,000 °C or 1,830 °F) is often used to set this isotherm because olivine is generally the weakest mineral in the upper mantle.[3]

The lithosphere is subdivided horizontally into tectonic plates, which often include terranes accreted from other plates.

History of the concept

The concept of the lithosphere as Earth's strong outer layer was described by A.E.H. Love in his 1911 monograph "Some problems of Geodynamics" and further developed by Joseph Barrell, who wrote a series of papers about the concept and introduced the term "lithosphere".[4][5][6][7] The concept was based on the presence of significant gravity anomalies over continental crust, from which he inferred that there must exist a strong, solid upper layer (which he called the lithosphere) above a weaker layer which could flow (which he called the asthenosphere). These ideas were expanded by Reginald Aldworth Daly in 1940 with his seminal work "Strength and Structure of the Earth."[8] They have been broadly accepted by geologists and geophysicists. These concepts of a strong lithosphere resting on a weak asthenosphere are essential to the theory of plate tectonics.

Geophysical studies in the early 21st century posit that large pieces of the lithosphere have been subducted into the mantle as deep as 2,900 kilometres (1,800 mi) to near the core-mantle boundary,[14] while others "float" in the upper mantle.[15][16] Yet others stick down into the mantle as far as 400 kilometres (250 mi) but remain "attached" to the continental plate above,[13] similar to the extent of the "tectosphere" proposed by Jordan in 1988.[17] Subducting lithosphere remains rigid (as demonstrated by deep earthquakes along Wadati–Benioff zone) to a depth of about 600 kilometres (370 mi).[18]

Geoscientists can directly study the nature of the subcontinental mantle by examining mantle xenoliths[21] brought up in kimberlite, lamproite, and other volcanic pipes. The histories of these xenoliths have been investigated by many methods, including analyses of abundances of isotopes of osmium and rhenium. Such studies have confirmed that mantle lithospheres below some cratons have persisted for periods in excess of 3 billion years, despite the mantle flow that accompanies plate tectonics.[22]