Short description: The number of neutrons in a nuclide 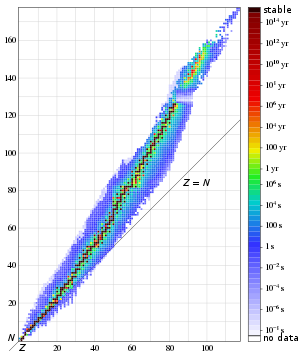 This diagram shows the half-life (T½) of various isotopes with Z protons and neutron number N.

The neutron number, symbol N, is the number of neutrons in a nuclide.

Neutron number is not written explicitly in nuclide symbol notation, but can be inferred as it is the difference between the two left-hand numbers (atomic number and mass).

Chemical properties are primarily determined by proton number, which determines which chemical element the nuclide is a member of; neutron number has only a slight influence.

Only 58 stable nuclides have an odd neutron number, compared to 194 with an even neutron number. No odd-neutron-number isotope is the most naturally abundant isotope in its element, except for beryllium-9 (which is the only stable beryllium isotope), nitrogen-14, and platinum-195.

Only two stable nuclides have fewer neutrons than protons: hydrogen-1 and helium-3. Hydrogen-1 has the smallest neutron number, 0.