In nuclear physics, double beta decay is a type of radioactive decay in which two neutrons are simultaneously transformed into two protons, or vice versa, inside an atomic nucleus. As in single beta decay, this process allows the atom to move closer to the optimal ratio of protons and neutrons. As a result of this transformation, the nucleus emits two detectable beta particles, which are electrons or positrons.

In 1930–1940s, parity violation in weak interactions was not known, and consequently calculations showed that neutrinoless double beta decay should be much more likely to occur than ordinary double beta decay, if neutrinos were Majorana particles. The predicted half-lives were on the order of 1015~1016 years.[5] Efforts to observe the process in laboratory date back to at least 1948 when E.L. Fireman made the first attempt to directly measure the half-life of the 124Sn isotope with a Geiger counter.[6] Radiometric experiments through about 1960 produced negative results or false positives, not confirmed by later experiments. In 1950, for the first time the double beta decay half-life of 130Te was measured by geochemical methods to be 1.4×1021 years,[7] reasonably close to the modern value. This involved detecting the concentration in minerals of the xenon produced by the decay.

In a typical double beta decay, two neutrons in the nucleus are converted to protons, and two electrons and two electron antineutrinos are emitted. The process can be thought as two simultaneous beta minus decays. In order for (double) beta decay to be possible, the final nucleus must have a larger binding energy than the original nucleus. For some nuclei, such as germanium-76, the isobar one atomic number higher (arsenic-76) has a smaller binding energy, preventing single beta decay. However, the isobar with atomic number two higher, selenium-76, has a larger binding energy, so double beta decay is allowed.

where the subscripts refer to each electron, T is kinetic energy, w is total energy, F(Z, T) is the Fermi function with Z the charge of the final-state nucleus, p is momentum, v is velocity in units of c, [math]\displaystyle{ \cos\theta }[/math] is the angle between the electrons, and Q is the Q value of the decay.

For some nuclei, the process occurs as conversion of two protons to neutrons, emitting two electron neutrinos and absorbing two orbital electrons (double electron capture). If the mass difference between the parent and daughter atoms is more than 1.022 MeV/c2 (two electron masses), another decay is accessible, capture of one orbital electron and emission of one positron. When the mass difference is more than 2.044 MeV/c2 (four electron masses), emission of two positrons is possible. These theoretical decay branches have not been observed.

Fourteen isotopes have been experimentally observed undergoing two-neutrino double beta decay (β–β–) or double electron capture (εε).[10] The table below contains nuclides with the latest experimentally measured half-lives, as of December 2016, except for 124Xe (for which double electron capture was first observed in 2019). Where two uncertainties are specified, the first one is statistical uncertainty and the second is systematic.

Searches for double beta decay in isotopes that present significantly greater experimental challenges are ongoing. One such isotope is 134Xe.[16] 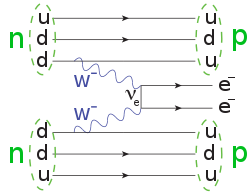 Feynman diagram of neutrinoless double beta decay, with two neutrons decaying to two protons. The only emitted products in this process are two electrons, which can occur if the neutrino and antineutrino are the same particle (i.e. Majorana neutrinos) so the same neutrino can be emitted and absorbed within the nucleus. In conventional double beta decay, two antineutrinos — one arising from each W vertex — are emitted from the nucleus, in addition to the two electrons. The detection of neutrinoless double beta decay is thus a sensitive test of whether neutrinos are Majorana particles.

With only two electrons in the final state, the electrons' total kinetic energy would be approximately the binding energy difference of the initial and final nuclei, with the nuclear recoil accounting for the rest. Because of momentum conservation, electrons are generally emitted back-to-back. The decay rate for this process is given by [math]\displaystyle{ \Gamma = G |M|^2 |m_{\beta \beta}|^2, }[/math] where G is the two-body phase-space factor, M is the nuclear matrix element, and mββ is the effective Majorana mass of the electron neutrino. In the context of light Majorana neutrino exchange, mββ is given by

where mi are the neutrino masses and the Uei are elements of the Pontecorvo–Maki–Nakagawa–Sakata (PMNS) matrix. Therefore, observing neutrinoless double beta decay, in addition to confirming the Majorana neutrino nature, can give information on the absolute neutrino mass scale and Majorana phases in the PMNS matrix, subject to interpretation through theoretical models of the nucleus, which determine the nuclear matrix elements, and models of the decay.[17][18]

The observation of neutrinoless double beta decay would require that at least one neutrino is a Majorana particle, irrespective of whether the process is engendered by neutrino exchange.[19]

Numerous experiments have searched for neutrinoless double beta decay. The best-performing experiments have a high mass of the decaying isotope and low backgrounds, with some experiments able to perform particle discrimination and electron tracking. In order to remove backgrounds from cosmic rays, most experiments are located in underground laboratories around the world.

Recent and proposed experiments include:

While some experiments have claimed a discovery of neutrinoless double beta decay, modern searches have found no evidence for the decay.

Some members of the Heidelberg-Moscow collaboration claimed a detection of neutrinoless beta decay in 76Ge in 2001.[25] This claim was criticized by outside physicists[1][26][27][28] as well as other members of the collaboration.[29] In 2006, a refined estimate by the same authors stated the half-life was 2.3×1025 years.[30] This half-life has been excluded at high confidence by other experiments, including in 76Ge by GERDA.[31]

So far, searches for triple and quadruple beta decay in 150Nd have remained unsuccessful.[32]