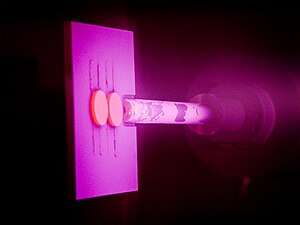 Inside the plasma-spray physical vapor deposition (PS-PVD) chamber, ceramic powder is introduced into the plasma flame, which vaporizes it and then condenses it on the (cooler) workpiece to form the ceramic coating.

Physical vapor deposition (PVD), sometimes (especially in single-crystal growth contexts) called physical vapor transport (PVT), describes a variety of vacuum deposition methods which can be used to produce thin films and coatings. PVD is characterized by a process in which the material goes from a condensed phase to a vapor phase and then back to a thin film condensed phase. The most common PVD processes are sputtering and evaporation. PVD is used in the manufacture of items which require thin films for mechanical, optical, chemical or electronic functions. Examples include semiconductor devices such as thin film solar panels,[1] aluminized PET film for food packaging and balloons,[2] and titanium nitride coated cutting tools for metalworking. Besides PVD tools for fabrication, special smaller tools (mainly for scientific purposes) have been developed.[3]

The source material is unavoidably also deposited on most other surfaces interior to the vacuum chamber, including the fixturing used to hold the parts.

Various thin film characterization techniques can be used to measure the physical properties of PVD coatings, such as:

Comparison to other deposition techniques

This figure gives a simple illustration of the process of PVD where the desired deposited gas molecules enter the chamber after being condensed, and then are condensed once again onto a thin film, such as the anisotropic glass.

PVD can be used as an application to make anisotropic glasses of low molecular weight for organic semiconductors.[7] To understand what the properties of this glass are that make it useful, first a brief idea of the mechanism. The parameter needed to allow the formation of this type of glass is molecular mobility and anisotropic structure at the free surface of the glass.[7] The configuration of the polymer is important where it needs to be positioned in a lower energy state before the added molecules bury the material through a deposition. This process of adding molecules to the structure starts to equilibrate and gain mass and bulk out to have more kinetic stability.[7] The packing of molecules here through PVD is face-on, meaning not at the long tail end, allows further overlap of pi orbitals as well which also increases the stability of added molecules and the bonds. The orientation of these added materials is dependent mainly on temperature for when molecules will be deposited or extracted from the molecule.[7] The equilibration of the molecules is what provides the glass with its anisotropic characteristics. The anisotropy of these glasses is valuable in it allows a higher charge carrier mobility and the higher the density of the glass the increase of charge transfer as well.[7] This process of packing in glass in an anisotropic way is valuable due to its versatility and the fact that glass provides added benefits beyond crystals, such as homogeneity and flexibility of composition.

By varying the gases and duration of the process, a range of colors is produced by Physical Vapor Deposition on stainless steel. The resulting colored stainless steel product can appear as brass, bronze, and other metals or alloys. This PVD-colored stainless steel can be used as exterior cladding for buildings and structures, such as the Vessel sculpture in New York City and The Bund in Shanghai. It is also used for interior hardware, paneling, and fixtures, and is even used on some consumer electronics, like the Space Gray and Gold finishes of the iPhone and Apple Watch.

As mentioned previously, PVD coatings are generally used to improve hardness, increase wear-resistance, and prevent oxidation. Thus, such coatings are used in a wide range of applications such as: