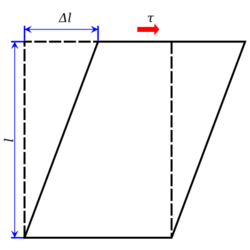 The formula to calculate average shear stress is force per unit area.:[1]

τ = the shear stress;
F = the force applied;
A = the cross-sectional area of material with area parallel to the applied force vector.

Wall shear stress express the force per unit area from the wall in the layer next to the wall of a conduct. It is defined as:

It is typically used in description of arteria blood flow in which there are substantial evidences that it affect atherogenic process.[2]

where G is the shear modulus of the isotropic material, given by

Here E is Young's modulus and ν is Poisson's ratio.

Beam shear is defined as the internal shear stress of a beam caused by the shear force applied to the beam.

f = total shear force at the location in question;
Q = statical moment of area;
b = thickness (width) in the material perpendicular to the shear;
I = moment of inertia of the entire cross-sectional area.

The beam shear formula is also known as Zhuravskii shear stress formula after Dmitrii Ivanovich Zhuravskii who derived it in 1855.[4][5]

Constructions in soil can also fail due to shear; e.g., the weight of an earth-filled dam or dike may cause the subsoil to collapse, like a small landslide.

The maximum shear stress created in a solid round bar subject to impact is given by the equation:

For a Newtonian fluid, the shear stress at a surface element parallel to a flat plate at the point y is given by:

μ is the dynamic viscosity of the flow;
u is the flow velocity along the boundary;
y is the height above the boundary.

Specifically, the wall shear stress is defined as:

Considering a 2D space in cartesian coordinates (x,y) (the flow velocity components are respectively (u,v)), then the shear stress matrix given by:

represents a Newtonian flow, in fact it can be expressed as:

i.e., an anisotropic flow with the viscosity tensor:

which is nonuniform (depends on space coordinates) and transient, but relevantly it is independent on the flow velocity:

This flow is therefore newtonian. On the other hand, a flow in which the viscosity were:

This relationship can be exploited to measure the wall shear stress. If a sensor could directly measure the gradient of the velocity profile at the wall, then multiplying by the dynamic viscosity would yield the shear stress. Such a sensor was demonstrated by A. A. Naqwi and W. C. Reynolds.[7] The interference pattern generated by sending a beam of light through two parallel slits forms a network of linearly diverging fringes that seem to originate from the plane of the two slits (see double-slit experiment). As a particle in a fluid passes through the fringes, a receiver detects the reflection of the fringe pattern. The signal can be processed, and knowing the fringe angle, the height and velocity of the particle can be extrapolated. The measured value of wall velocity gradient is independent of the fluid properties and as a result does not require calibration. Recent advancements in the micro-optic fabrication technologies have made it possible to use integrated diffractive optical element to fabricate diverging fringe shear stress sensors usable both in air and liquid.[8]

A further measurement technique is that of slender wall-mounted micro-pillars made of the flexible polymer PDMS, which bend in reaction to the applying drag forces in the vicinity of the wall. The sensor thereby belongs to the indirect measurement principles relying on the relationship between near-wall velocity gradients and the local wall-shear stress.[9][10]

The Electro-Diffusional method measures the wall shear rate in the liquid phase from microelectrode under limiting diffusion current condition. A potential difference between an anode of a broad surface (usually located far from the measuring area) and the small working electrode acting as a cathode leads to a fast redox reaction. The ion disappearance occurs only on the microprobe active surface, causing the development of the diffusion boundary layer, in which the fast electro-diffusion reaction rate is controlled only by diffusion. The resolution of the convective-diffusive equation in the near wall region of the microelectrode lead to analytical solutions relying the characteristics length of the micro-probes, the diffusional properties of the electrochemical solution and the wall shear rate.[11]