Short description: Types of movement possible for a rigid body in three-dimensional space 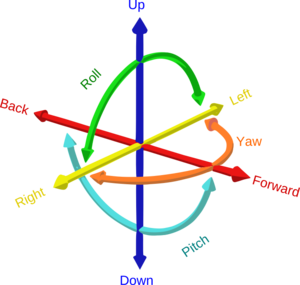 Serial and parallel manipulator systems are generally designed to position an end-effector with six degrees of freedom, consisting of three in translation and three in orientation. This provides a direct relationship between actuator positions and the configuration of the manipulator defined by its forward and inverse kinematics.

Robot arms are described by their degrees of freedom. This is a practical metric, in contrast to the abstract definition of degrees of freedom which measures the aggregate positioning capability of a system.[3]

The term is important in mechanical systems, especially biomechanical systems, for analyzing and measuring properties of these types of systems that need to account for all six degrees of freedom. Measurement of the six degrees of freedom is accomplished today through both AC and DC magnetic or electromagnetic fields in sensors that transmit positional and angular data to a processing unit. The data is made relevant through software that integrates the data based on the needs and programming of the users.

The six degrees of freedom of a mobile unit are divided in two motional classes as described below.

In terms of a headset, such as the kind used for virtual reality, rotational envelopes can also be thought of in the following terms:

There are three types of operational envelope in the Six degrees of freedom. These types are Direct, Semi-direct (conditional) and Non-direct, all regardless of the time remaining for the execution of the maneuver, the energy remaining to execute the maneuver and finally, if the motion is commanded via a biological entity (e.g. human), a robotical entity (e.g. computer) or both.

First-person shooter (FPS) games generally provide five degrees of freedom: forwards/backwards, slide left/right, up/down (jump/crouch/lie), yaw (turn left/right), and pitch (look up/down). If the game allows leaning control, then some consider it a sixth DOF; however, this may not be completely accurate, as a lean is a limited partial rotation.

Motion tracking hardware devices such as TrackIR and software-based apps like Eyeware Beam are used for 6DOF head tracking. This device often finds its places in flight simulators and other vehicle simulators that require looking around the cockpit to locate enemies or simply avoiding accidents in-game.

The acronym 3DOF, meaning movement in the three dimensions but not rotation, is sometimes encountered.

The Razer Hydra, a motion controller for PC, tracks position and rotation of two wired nunchucks, providing six degrees of freedom on each hand.

The SpaceOrb 360 is a 6DOF computer input device released in 1996 originally manufactured and sold by the SpaceTec IMC company (first bought by Labtec, which itself was later bought by Logitech).

The controllers sold with HTC VIVE provide 6DOF information by the lighthouse, which adopts Time of Flight (TOF) technology to determine the position of controllers.