The Tonti diagram,[1] created by the Italian physicist and mathematician Enzo Tonti, is a diagram that classifies variables and equations of physical theories of classical and relativistic physics. The theories involved are: particle dynamics, analytical mechanics, mechanics of deformable solids, fluid mechanics, electromagnetism, gravitation, heat conduction, and irreversible thermodynamics. The classification stems from the observation that each physical variable has a well-defined association with a space and a time element, as shown in Fig. 1, which can be grasped from the corresponding global variable and from its measuring process.

The starting point of this classification stems from a remark by Maxwell. Speaking about analogies in different physical theories, Maxwell wrote in 1871:[2]

Of the factors which compose it [energy], one is referred to unit of length, and the other to unit of area. This gives what I regard as a very important distinction among vector quantities.

This remark leads us to a distinction between vectors referred to lines and vectors referred to surfaces. This is not customarily considered in vector calculus or in physics. In electromagnetism, hence, vectors E and H are associated with lines, and vectors D and B are associated with surfaces. This distinction leads to a classification of physical variables based on their association with space elements. Maxwell continues:

It is only through the progress of science in recent times that we have become acquainted with so large a number of physical quantities that a classification of them is desirable. [...] But the classification which I now refer to is founded on the mathematical or formal analogy of the different quantities, and not on the matter to which they belong.

The classification diagram arises from an analysis of the association of physical variables in different physical theories, whatever their mathematical nature, i.e. scalars, vectors, tensors, etc., with space and time elements.

The three kinds of physical quantities

Physics, compared to other natural sciences, has the great privilege of considering the quantitative attributes of physical systems and from these originate the physical quantities, which can be scalars, vectors, tensors, etc. Physical quantities can be divided into three main categories: physical variables, physical parameters and fundamental constants.[3]

Global variables in time and rates

The term time-global variables is used to indicate variables that are not rates of other variables. Displacement, impulse, momentum and position vector are therefore global variables. Displacement and impulse are associated with time intervals, while momentum and position vector are associated with instants. This is evident if we think that we can perform the rates of the first two variables obtaining velocity and force respectively, while we cannot perform the rates of the last two variables.

The three kinds of physical variables

By the term "space elements" we intend points, lines, surfaces and volumes, which are denoted P,L,S and V respectively. By the term "time elements" we intend time instants and time intervals, which are denoted I and T respectively. Space elements are naturally classified according to their dimension, from the smallest to the biggest, i.e. points, lines, surfaces and volumes. The same classification applies to time elements, i.e. instants and intervals. 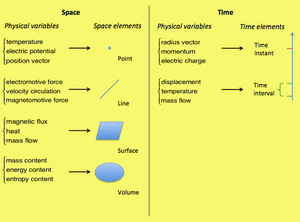 Figure 1.The figure shows a number of physical variables with the space and time elements they are associated with.

Figure 2. Every space element can be endowed with one of the two possible orientations: inner and outer.

Figure 3. Left) A two-dimensional cell complex and its dual; right) the classification of its space elements.

In this classification, the orientation of the space elements has a fundamental role. There are two kinds of orientation: inner and outer orientation,[4] as shown in Fig. 2.

Figure 4. Left) A three-dimensional cell complex and its dual; right) the classification of its space elements.

To highlight the four space elements, it is expedient to divide a region of space into many cells, thus creating a cell complex. The vertices represent points, the edges lines, the faces surfaces and the cells themselves volumes. Each of these elements can be given an inner orientation. Since we also need space elements with outer orientation, it is expedient to consider the dual complex, obtained by joining the centroids of the cells belonging to the primal complex. Doing so, we see that the inner orientation of each element of the primal complex induces an outer orientation on the corresponding element of the dual complex.

At first glance, the notions of inner and outer orientation of a time element may appear strange, certainly unusual. Consider a subdivision of the time axis into many adjacent time intervals. Doing so, we have constructed a one-dimensional cell complex in time. Considering now the middle instants of each time interval we have a second cell complex in time. The first complex is called primal and the second dual.

Primal complex, inner orientation: the fact that the time axis is oriented implies that each time interval is oriented: this is the inner orientation of the primal time intervals. Since the variation of a time function φ (t) is defined as Δφ = + φ (t + h)-φ (t), in order to conceive the "+" and "-" signs of this formula as incidence numbers between a time interval and its bounding instants, these should be considered as "sinks".

The birth of the classification diagram[5] 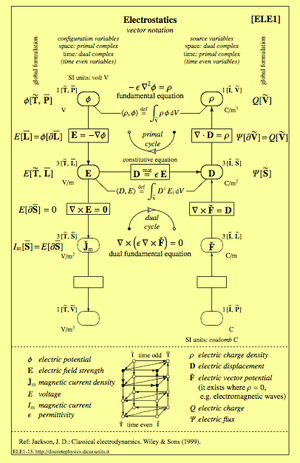 Particle dynamics, analytical mechanics and electric networks make use of space-global variables that depend only on the time variable. Referring here to particle dynamics, we see that configuration variables are geometrical and kinematic variables, while source variables are static and dynamic variables. In Fig. 7 we see that kinematic variables lie in the left column while dynamic variables lie in the right one. The diagram shows three phenomenological equations: those connecting two variables on the same level describe a reversible relation (i.e. a non-dissipative relation), while those linking force with velocity describe an irreversible relation (i.e. a dissipative relation). The dissipative nature is shown by the fact that one variable, velocity, changes sign under reversal of motion, while the other, force, does not.

The space-time diagrams show clearly which phenomenological equations describe irreversible phenomena: they are the ones that link variables that are on the same level but connect a box on the front-left side with a box on the back-right side.