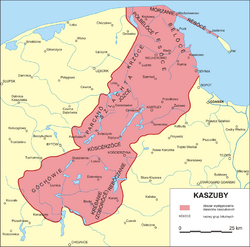 Kashubia by Bernard Sychta as the Kashubian dialects area

Kashubia or Cassubia (Template:Lang-csb, Polish: Kaszuby, German: Kaschubei, Kaschubien) is a language area in the historic Eastern Pomerania (Pomerelia) region of northern and northwestern Poland . It is defined by the widespread use of the Kashubian language.

Located west of Gdańsk (inclusive of all but the easternmost district) and the mouth of the Vistula river, it is inhabited by members of the Kashubian ethnic group. The region is home to the Kashubian Lake District. According to the 1999 basic study Geografia współczesnych Kaszub (Geography of present-day Kashubia) by the Gdańsk scholar Jan Mordawski 43 municipalities (gminas) of the Pomeranian Voivodeship have a Kashubian share of at least one third of the total population:[1] 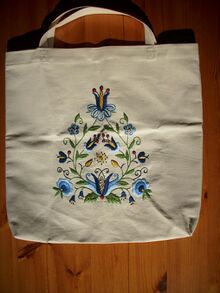 Kashubian cuisine is mostly based on fish and meat. Grain is also widely used within Kashubian dishes. Herring are the most widely used fish due to their high numbers in the region. Mushrooms are also a part of Kashubia's wide variety of dishes.[5][6]