Editors like Leafpad, shown here, are often included with operating systems as a default helper application for opening text files.

A text editor is a type of computer program that edits plain text. Such programs are sometimes known as "notepad" software, following the naming of Microsoft Notepad.[1][2][3] Text editors are provided with operating systems and software development packages, and can be used to change files such as configuration files, documentation files and programming language source code.[4]

There are important differences between plain text (created and edited by text editors) and rich text (such as that created by word processors or desktop publishing software).

Plain text exclusively consists of character representation. Each character is represented by a fixed-length sequence of one, two, or four bytes, or as a variable-length sequence of one to four bytes, in accordance to specific character encoding conventions, such as ASCII, ISO/IEC 2022, Shift JIS, UTF-8, or UTF-16. These conventions define many printable characters, but also non-printing characters that control the flow of the text, such as space, line break, and page break. Plain text contains no other information about the text itself, not even the character encoding convention employed. Plain text is stored in text files, although text files do not exclusively store plain text. Since the early days of computers, plain text was (once by necessity and now by convention) generally displayed using a monospace font, such that horizontal alignment and columnar formatting were sometimes done using whitespace characters.

Rich text, on the other hand, may contain metadata, character formatting data (e.g. typeface, size, weight and style), paragraph formatting data (e.g. indentation, alignment, letter and word distribution, and space between lines or other paragraphs), and page specification data (e.g. size, margin and reading direction). Rich text can be very complex. Rich text can be saved in binary format (e.g. DOC), text files adhering to a markup language (e.g. RTF or HTML), or in a hybrid form of both (e.g. Office Open XML).

Text editors are intended to open and save text files containing either plain text or anything that can be interpreted as plain text, including the markup for rich text or the markup for something else (e.g. SVG). 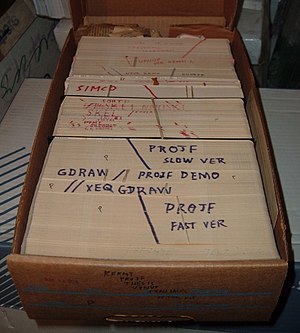 A box of punched cards with several program decks.

Before text editors existed, computer text was punched into cards with keypunch machines. Physical boxes of these thin cardboard cards were then inserted into a card-reader. Magnetic tape and disk "card-image" files created from such card decks often had no line-separation characters at all, and assumed fixed-length 80-character records. An alternative to cards was punched paper tape. It could be created by some teleprinters (such as the Teletype), which used special characters to indicate ends of records.

The first text editors were "line editors" oriented to teleprinter- or typewriter-style terminals without displays. Commands (often a single keystroke) effected edits to a file at an imaginary insertion point called the "cursor". Edits were verified by typing a command to print a small section of the file, and periodically by printing the entire file. In some line editors, the cursor could be moved by commands that specified the line number in the file, text strings (context) for which to search, and eventually regular expressions. Line editors were major improvements over keypunching. Some line editors could be used by keypunch; editing commands could be taken from a deck of cards and applied to a specified file. Some common line editors supported a "verify" mode in which change commands displayed the altered lines.

When computer terminals with video screens became available, screen-based text editors (sometimes called just "screen editors") became common. One of the earliest full-screen editors was O26, which was written for the operator console of the CDC 6000 series computers in 1967. Another early full-screen editor was vi. Written in the 1970s, it is still a standard editor[5] on Unix and Linux operating systems. Also written in the 1970s was the UCSD Pascal Screen Oriented Editor, which was optimized both for indented source code as well as general text.[6] Emacs, one of the first free and open source software projects, is another early full-screen or real-time editor, one that was ported to many systems.[7] A full-screen editor's ease-of-use and speed (compared to the line-based editors) motivated many early purchases of video terminals.[8]

The core data structure in a text editor is the one that manages the string (sequence of characters) or list of records that represents the current state of the file being edited. While the former could be stored in a single long consecutive array of characters, the desire for text editors that could more quickly insert text, delete text, and undo/redo previous edits led to the development of more complicated sequence data structures.[9] A typical text editor uses a gap buffer, a linked list of lines (as in PaperClip), a piece table, or a rope, as its sequence data structure. 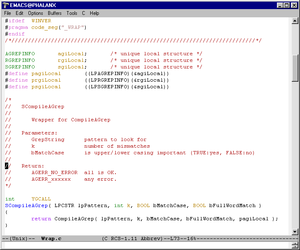 gedit is a text editor shipped with GNOME

Some text editors can edit unusually large files such as log files or an entire database placed in a single file. Simpler text editors may just read files into the computer's main memory. With larger files, this may be a slow process, and the entire file may not fit. Some text editors do not let the user start editing until this read-in is complete. Editing performance also often suffers in nonspecialized editors, with the editor taking seconds or even minutes to respond to keystrokes or navigation commands. Specialized editors have optimizations such as only storing the visible portion of large files in memory, improving editing performance.

Some editors are programmable, meaning, e.g., they can be customized for specific uses. With a programmable editor it is easy to automate repetitive tasks or, add new functionality or even implement a new application within the framework of the editor. One common motive for customizing is to make a text editor use the commands of another text editor with which the user is more familiar, or to duplicate missing functionality the user has come to depend on. Software developers often use editor customizations tailored to the programming language or development environment they are working in. The programmability of some text editors is limited to enhancing the core editing functionality of the program, but Emacs can be extended far beyond editing text files—for web browsing, reading email, online chat, managing files or playing games and is often thought of as a Lisp execution environment with a Text User Interface. Emacs can even be programmed to emulate Vi, its rival in the traditional editor wars of Unix culture.[11][12]

An important group of programmable editors uses REXX[lower-alpha 1] as a scripting language. These "orthodox editors" contain a "command line" into which commands and macros can be typed and text lines into which line commands[lower-alpha 2] and macros can be typed. Most such editors are derivatives of ISPF/PDF EDIT or of XEDIT, IBM's flagship editor for VM/SP through z/VM. Among them are THE, KEDIT, X2, Uni-edit, and SEDIT.

A text editor written or customized for a specific use can determine what the user is editing and assist the user, often by completing programming terms and showing tooltips with relevant documentation. Many text editors for software developers include source code syntax highlighting and automatic indentation to make programs easier to read and write. Programming editors often let the user select the name of an include file, function or variable, then jump to its definition. Some also allow for easy navigation back to the original section of code by storing the initial cursor location or by displaying the requested definition in a popup window or temporary buffer. Some editors implement this ability themselves, but often an auxiliary utility like ctags is used to locate the definitions.

Some editors include special features and extra functions, for instance,

Programmable editors can usually be enhanced to perform any or all of these functions, but simpler editors focus on just one, or, like gPHPedit, are targeted at a single programming language.