Short description: Continuous range of values, such as wavelengths in physics 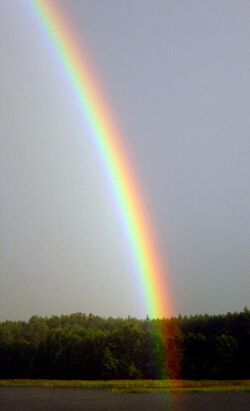 The spectrum in a rainbow

A spectrum (plural spectra or spectrums)[1] is a condition that is not limited to a specific set of values but can vary, without gaps, across a continuum. The word was first used scientifically in optics to describe the rainbow of colors in visible light after passing through a prism. As scientific understanding of light advanced, it came to apply to the entire electromagnetic spectrum. It thereby became a mapping of a range of magnitudes (wavelengths) to a range of qualities, which are the perceived "colors of the rainbow" and other properties which correspond to wavelengths that lie outside of the visible light spectrum.

Spectrum has since been applied by analogy to topics outside optics. Thus, one might talk about the "spectrum of political opinion", or the "spectrum of activity" of a drug, or the "autism spectrum". In these uses, values within a spectrum may not be associated with precisely quantifiable numbers or definitions. Such uses imply a broad range of conditions or behaviors grouped together and studied under a single title for ease of discussion. Nonscientific uses of the term spectrum are sometimes misleading. For instance, a single left–right spectrum of political opinion does not capture the full range of people's political beliefs. Political scientists use a variety of biaxial and multiaxial systems to more accurately characterize political opinion.

In most modern usages of spectrum there is a unifying theme between the extremes at either end. This was not always true in older usage.

In Latin, spectrum means "image" or "apparition", including the meaning "spectre". Spectral evidence is testimony about what was done by spectres of persons not present physically, or hearsay evidence about what ghosts or apparitions of Satan said. It was used to convict a number of persons of witchcraft at Salem, Massachusetts in the late 17th century. The word "spectrum" [Spektrum] was strictly used to designate a ghostly optical afterimage by Goethe in his Theory of Colors and Schopenhauer in On Vision and Colors.

The prefix "spectro-" is used to form words relating to spectra. For example, a spectrometer is a device used to record spectra and spectroscopy is the use of a spectrometer for chemical analysis.

This section is an excerpt from Spectrum (physical sciences)[ edit ]

In psychiatry, the spectrum approach uses the term spectrum to describe a range of linked conditions, sometimes also extending to include singular symptoms and traits. For example, the autism spectrum describes a range of conditions classified as neurodevelopmental disorders.

In mathematics, the spectrum of a matrix is the multiset of the eigenvalues of the matrix.

In functional analysis, the concept of the spectrum of a bounded operator is a generalization of the eigenvalue concept for matrices.

In algebraic topology, a spectrum is an object representing a generalized cohomology theory. 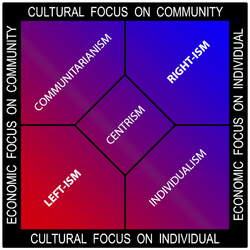 In social science, economic spectrum is used to indicate the range of social class along some indicator of wealth or income. In political science, the term political spectrum refers to a system of classifying political positions in one or more dimensions, for example in a range including right wing and left wing.