Here we consider the simplest case, i.e. manifolds of codimension one. Let M ⊂ Rn+1 be an n-dimensional manifold, and let ξ be a vector field on Rn+1 transverse to M such that TpRn+1 = TpM ⊕ Span(ξ) for all p ∈ M, where ⊕ denotes the direct sum and Span the linear span.

For a smooth manifold, say N, let Ψ(N) denote the module of smooth vector fields over N. Let D : Ψ(Rn+1)×Ψ(Rn+1) → Ψ(Rn+1) be the standard covariant derivative on Rn+1 where D(X, Y) = DXY. We can decompose DXY into a component tangent to M and a transverse component, parallel to ξ. This gives the equation of Gauss: DXY = ∇XY + h(X,Y)ξ, where ∇ : Ψ(M)×Ψ(M) → Ψ(M) is the induced connexion on M and h : Ψ(M)×Ψ(M) → R is a bilinear form. Notice that ∇ and h depend upon the choice of transverse vector field ξ. We consider only those hypersurfaces for which h is non-degenerate. This is a property of the hypersurface M and does not depend upon the choice of transverse vector field ξ.[1] If h is non-degenerate then we say that M is non-degenerate. In the case of curves in the plane, the non-degenerate curves are those without inflexions. In the case of surfaces in 3-space, the non-degenerate surfaces are those without parabolic points.

We may also consider the derivative of ξ in some tangent direction, say X. This quantity, DXξ, can be decomposed into a component tangent to M and a transverse component, parallel to ξ. This gives the Weingarten equation: DXξ = −SX + τ(X)ξ. The type-(1,1)-tensor S : Ψ(M) → Ψ(M) is called the affine shape operator, the differential one-form τ : Ψ(M) → R is called the transverse connexion form. Again, both S and τ depend upon the choice of transverse vector field ξ.

We impose two natural conditions. The first is that the induced connexion ∇ and the induced volume form ω be compatible, i.e. ∇ω ≡ 0. This means that ∇Xω = 0 for all X ∈ Ψ(M). In other words, if we parallel transport the vectors X1,...,Xn along some curve in M, with respect to the connexion ∇, then the volume spanned by X1,...,Xn, with respect to the volume form ω, does not change. A direct calculation[1] shows that ∇Xω = τ(X)ω and so ∇Xω = 0 for all X ∈ Ψ(M) if, and only if, τ ≡ 0, i.e. DXξ ∈ Ψ(M) for all X ∈ Ψ(M). This means that the derivative of ξ, in a tangent direction X, with respect to D always yields a, possibly zero, tangent vector to M. The second condition is that the two volume forms ω and ν coincide, i.e. ω ≡ ν.

It can be shown[1] that there is, up to sign, a unique choice of transverse vector field ξ for which the two conditions that ∇ω ≡ 0 and ω ≡ ν are both satisfied. These two special transverse vector fields are called affine normal vector fields, or sometimes called Blaschke normal fields.[2] From its dependence on volume forms for its definition we see that the affine normal vector field is invariant under volume preserving affine transformations. These transformations are given by SL(n+1,R) ⋉ Rn+1, where SL(n+1,R) denotes the special linear group of (n+1) × (n+1) matrices with real entries and determinant 1, and ⋉ denotes the semi-direct product. SL(n+1,R) ⋉ Rn+1 forms a Lie group.

The affine normal line at a point p ∈ M is the line passing through p and parallel to ξ. 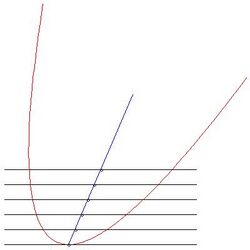 The affine normal vector field for a curve in the plane has a nice geometrical interpretation.[2] Let I ⊂ R be an open interval and let γ : I → R2 be a smooth parametrisation of a plane curve. We assume that γ(I) is a non-degenerate curve (in the sense of Nomizu and Sasaki[1]), i.e. is without inflexion points. Consider a point p = γ(t0) on the plane curve. Since γ(I) is without inflexion points it follows that γ(t0) is not an inflexion point and so the curve will be locally convex,[3] i.e. all of the points γ(t) with t0 − ε < t < t0 + ε, for sufficiently small ε, will lie on the same side of the tangent line to γ(I) at γ(t0).

A similar analogue exists for finding the affine normal line at elliptic points of smooth surfaces in 3-space. This time one takes planes parallel to the tangent plane. These, for planes sufficiently close to the tangent plane, intersect the surface to make convex plane curves. Each convex plane curve has a centre of mass. The locus of centres of mass trace out a curve in 3-space. The limiting tangent line to this locus as one tends to the original surface point is the affine normal line, i.e. the line containing the affine normal vector.