Short description: Geometric transformation that preserves lines but not angles nor the origin 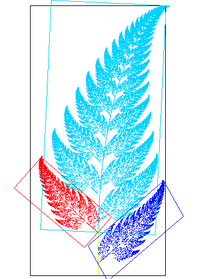 An image of a fern-like fractal (Barnsley's fern) that exhibits affine self-similarity. Each of the leaves of the fern is related to each other leaf by an affine transformation. For instance, the red leaf can be transformed into both the dark blue leaf and any of the light blue leaves by a combination of reflection, rotation, scaling, and translation.

In Euclidean geometry, an affine transformation, or an affinity (from the Latin, affinis, "connected with"), is a geometric transformation that preserves lines and parallelism (but not necessarily distances and angles).

Examples of affine transformations include translation, scaling, homothety, similarity, reflection, rotation, shear mapping, and compositions of them in any combination and sequence.

A generalization of an affine transformation is an affine map[1] (or affine homomorphism or affine mapping) between two (potentially different) affine spaces over the same field k. Let (X, V, k) and (Z, W, k) be two affine spaces with X and Z the point sets and V and W the respective associated vector spaces over the field k. A map f: X → Z is an affine map if there exists a linear map mf : V → W such that mf (x − y) = f (x) − f (y) for all x, y in X.[2]

Let (X, V, k) be an affine space of dimension at least two, with X the point set and V the associated vector space over the field k. A semiaffine transformation f of X is a bijection of X onto itself satisfying:[3]

These two conditions express what is precisely meant by the expression that "f preserves parallelism".

These conditions are not independent as the second follows from the first.[4] Furthermore, if the field k has at least three elements, the first condition can be simplified to: f is a collineation, that is, it maps lines to lines.[5]

This vector space has origin c and formally needs to be distinguished from the affine space X, but common practice is to denote it by the same symbol and mention that it is a vector space after an origin has been specified. This identification permits points to be viewed as vectors and vice versa.

For any linear transformation λ of V, we can define the function L(c, λ) : X → X by

is equivalent to the following

This representation exhibits the set of all invertible affine transformations as the semidirect product of [math]\displaystyle{ K^n }[/math] and [math]\displaystyle{ \operatorname{GL}(n, K) }[/math]. This is a group under the operation of composition of functions, called the affine group.

The advantage of using homogeneous coordinates is that one can combine any number of affine transformations into one by multiplying the respective matrices. This property is used extensively in computer graphics, computer vision and robotics.

This formulation works irrespective of whether any of the domain, codomain and image vector spaces have the same number of dimensions.

Each of these groups has a subgroup of orientation-preserving or positive affine transformations: those where the determinant of [math]\displaystyle{ A }[/math] is positive. In the last case this is in 3D the group of rigid transformations (proper rotations and pure translations).

We can interpret this definition in a few other ways, as follows.

followed by the translation by a vector [math]\displaystyle{ \vec{b} = \overrightarrow{O'B} }[/math].

The conclusion is that, intuitively, [math]\displaystyle{ f }[/math] consists of a translation and a linear map.

The word "affine" as a mathematical term is defined in connection with tangents to curves in Euler's 1748 Introductio in analysin infinitorum.[17] Felix Klein attributes the term "affine transformation" to Möbius and Gauss.[12]

The affine transforms are applicable to the registration process where two or more images are aligned (registered). An example of image registration is the generation of panoramic images that are the product of multiple images stitched together.

The affine transform preserves parallel lines. However, the stretching and shearing transformations warp shapes, as the following example shows:

This is an example of image warping. However, the affine transformations do not facilitate projection onto a curved surface or radial distortions. 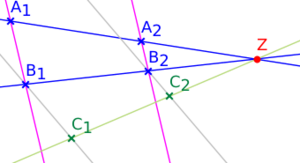 To visualise the general affine transformation of the Euclidean plane, take labelled parallelograms ABCD and A′B′C′D′. Whatever the choices of points, there is an affine transformation T of the plane taking A to A′, and each vertex similarly. Supposing we exclude the degenerate case where ABCD has zero area, there is a unique such affine transformation T. Drawing out a whole grid of parallelograms based on ABCD, the image T(P) of any point P is determined by noting that T(A) = A′, T applied to the line segment AB is A′B′, T applied to the line segment AC is A′C′, and T respects scalar multiples of vectors based at A. [If A, E, F are collinear then the ratio length(AF)/length(AE) is equal to length(A′F′)/length(A′E′).] Geometrically T transforms the grid based on ABCD to that based in A′B′C′D′.

Affine transformations do not respect lengths or angles; they multiply area by a constant factor

A given T may either be direct (respect orientation), or indirect (reverse orientation), and this may be determined by its effect on signed areas (as defined, for example, by the cross product of vectors).

Over the real numbers

Over a finite field

The following equation expresses an affine transformation of GF(28) viewed as an 8-dimensional vector space over GF(2), that is used in the crypto-algorithm Rijndael (AES): 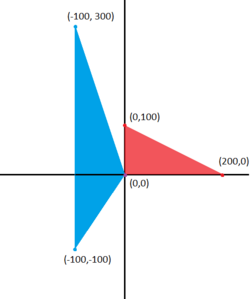 A simple affine transformation on the real plane 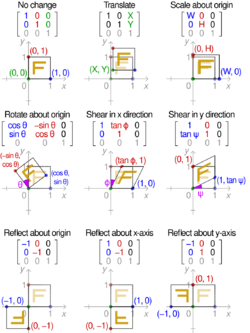 Effect of applying various 2D affine transformation matrices on a unit square. Note that the reflection matrices are special cases of the scaling matrix.

In [math]\displaystyle{ \mathbb{R}^2 }[/math], the transformation shown at left is accomplished using the map given by:

In fact, all triangles are related to one another by affine transformations. This is also true for all parallelograms, but not for all quadrilaterals.