is a rational expression, whereas

are set equal to each other. These expressions obey the same rules as fractions. The equations can be solved by cross-multiplying. Division by zero is undefined, so that a solution causing formal division by zero is rejected.

Algebra has its own terminology to describe parts of an expression: 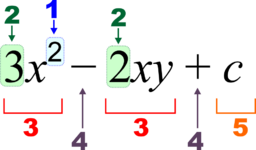 In roots of polynomials

The roots of a polynomial expression of degree n, or equivalently the solutions of a polynomial equation, can always be written as algebraic expressions if n < 5 (see quadratic formula, cubic function, and quartic equation). Such a solution of an equation is called an algebraic solution. But the Abel–Ruffini theorem states that algebraic solutions do not exist for all such equations (just for some of them) if n [math]\displaystyle{ \ge }[/math] 5.

Algebraic and other mathematical expressions

The table below summarizes how algebraic expressions compare with several other types of mathematical expressions by the type of elements they may contain, according to common but not universal conventions.