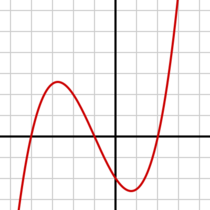 In mathematics, a cubic function is a function of the form [math]\displaystyle{ f(x)=ax^3+bx^2+cx+d }[/math] where the coefficients a, b, c, and d are complex numbers, and the variable x takes real values, and [math]\displaystyle{ a\neq 0 }[/math]. In other words, it is both a polynomial function of degree three, and a real function. In particular, the domain and the codomain are the set of the real numbers.

Setting f(x) = 0 produces a cubic equation of the form

whose solutions are called roots of the function.

A cubic function has either one or three real roots (which may not be distinct);[1] all odd-degree polynomials have at least one real root.

occur at values of x such that the derivative

of the cubic function is zero.

The solutions of this equation are the x-values of the critical points and are given, using the quadratic formula, by 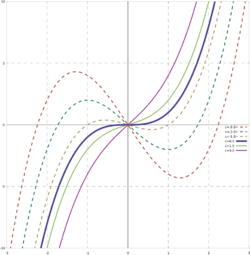 Cubic functions of the form [math]\displaystyle{ y=x^3+cx. }[/math]
The graph of any cubic function is similar to such a curve.

The graph of a cubic function is a cubic curve, though many cubic curves are not graphs of functions.

This similarity can be built as the composition of translations parallel to the coordinates axes, a homothecy (uniform scaling), and, possibly, a reflection (mirror image) with respect to the y-axis. A further non-uniform scaling can transform the graph into the graph of one among the three cubic functions

This means that there are only three graphs of cubic functions up to an affine transformation.

The above geometric transformations can be built in the following way, when starting from a general cubic function [math]\displaystyle{ y=ax^3+bx^2+cx+d. }[/math]

Then, the change of variable x = x1 – b/3a provides a function of the form

This corresponds to a translation parallel to the x-axis.

The change of variable y = y1 + q corresponds to a translation with respect to the y-axis, and gives a function of the form

which is the simplest form that can be obtained by a similarity. 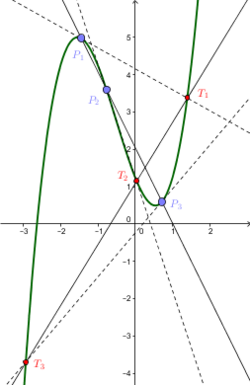 As this property is invariant under a rigid motion, one may suppose that the function has the form

If α is a real number, then the tangent to the graph of f at the point (α, f(α)) is the line

So, the intersection point between this line and the graph of f can be obtained solving the equation f(x) = f(α) + (x − α)f ′(α), that is

which can be rewritten

So, the tangent intercepts the cubic at

So, the function that maps a point (x, y) of the graph to the other point where the tangent intercepts the graph is

Given the values of a function and its derivative at two points, there is exactly one cubic function that has the same four values, which is called a cubic Hermite spline.

There are two standard ways for using this fact. Firstly, if one knows, for example by physical measurement, the values of a function and its derivative at some sampling points, one can interpolate the function with a continuously differentiable function, which is a piecewise cubic function.

If the value of a function is known at several points, cubic interpolation consists in approximating the function by a continuously differentiable function, which is piecewise cubic. For having a uniquely defined interpolation, two more constraints must be added, such as the values of the derivatives at the endpoints, or a zero curvature at the endpoints.