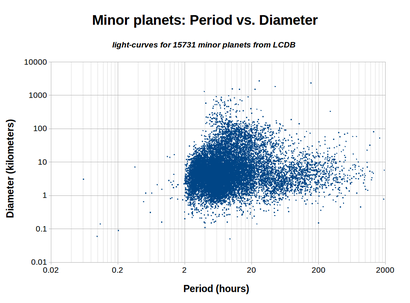 This plot shows the distribution of rotation periods for 15,000 minor planets, plotted against their diameters. Most bodies have a period between 2 and 20 hours.[1][lower-alpha 1]

This is a list of fast rotators—minor planets that have an exceptionally short rotation period, also called "rotation rate" or "spin rate". It is a fundamental standard physical property for minor planets. In this list the periods are sourced from the Light Curve Data Base (LCDB),[2] and are given in both seconds and hours.

Most minor planets have rotation periods between 2 and 20 hours.[1][3] As of 2019[update], a group of 887 bodies – most of them are stony near-Earth asteroids with small diameters of barely 1 kilometer– have an estimated period of less than 2.2 hours. According to the Minor Planet Center, most smaller bodies are thought to be rubble piles – conglomerations of smaller pieces, loosely coalesced under the influence of gravity. Bodies below a period of 2.2 hours – also known as the "cohesionless spin-barrier" – can not be merely held together by self-gravity, but must be formed of a contiguous solid, as they would fly apart otherwise.[3] Via the deduction of strength boundary limits, rotation periods give an insight into the body's internal composition, and, from its degree of fracture, its collisional history can be inferred.[4]

Bodies with an uncertain period are displayed in dark-grey. They have a LCDB quality code, U, of less than 2, which corresponds to an estimated error margin of larger than 30%. A trailing plus sign (+) or minus sign (−) indicate slightly better or worse quality, respectively, than the unsigned value.[5] This list also includes a small group of bodies which have no provisional designation in the LCDB.