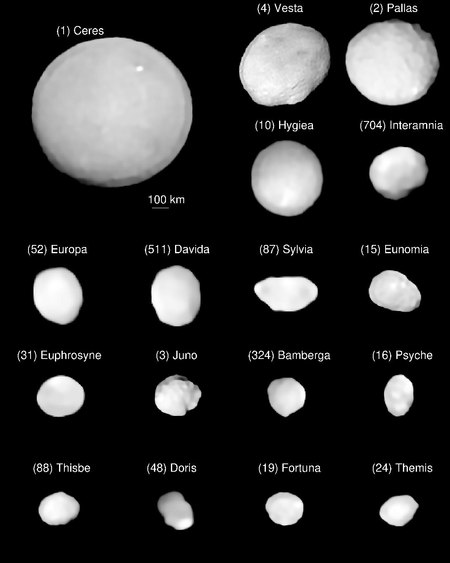 VLT/SPHERE images of most asteroids > 210 km in diameter to scale. Deconvolved with MISTRAL algorithm. Main-belt asteroids > 200 km that were not imaged are (451) Patientia, (65) Cybele and (107) Camilla. Trojan (624) Hektor may also be in this size range. 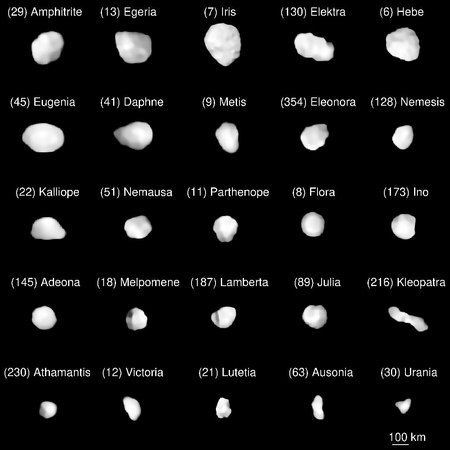 VLT/SPHERE images of a large number of asteroids 100 to 210 km in diameter, to scale. (10) Hygiea, (31) Euphrosyne and (8) Flora have collisional families; all three are round due to having re-coalesced after being disrupted.

The following is a collection of lists of asteroids of the Solar System that are exceptional in some way, such as their size or orbit. For the purposes of this article, "asteroid" refers to minor planets out to the orbit of Neptune, and includes the dwarf planet 1 Ceres, the Jupiter trojans and the centaurs, but not trans-Neptunian objects (objects in the Kuiper belt, scattered disc or inner Oort cloud). For a complete list of minor planets in numerical order, see List of minor planets.

Asteroids are given a unique sequential identifying number once their orbit is precisely determined. Prior to this, they are known only by their systematic name or provisional designation, such as 1950 DA.

Estimating the sizes of asteroids from observations is difficult due to their irregular shapes, varying albedo, and small angular diameter. Observations by the Very Large Telescope of most large asteroids were published 2019–2021.[1][2]

The number of bodies grows rapidly as the size decreases. Based on IRAS data there are about 140 main-belt asteroids with a diameter greater than 120 km.[6] For a more complete list, see List of Solar System objects by size.

The inner asteroid belt (defined as the region interior to the 3:1 Kirkwood gap at 2.50 AU) has few large asteroids. Of those in the above list, only 4 Vesta, 19 Fortuna, 6 Hebe, 7 Iris and 9 Metis orbit there. (Sort table by mean distance.)

Below are the sixteen most-massive measured asteroids.[7] Ceres, at a third the estimated mass of the asteroid belt, is half again as massive as the next fifteen put together. The masses of asteroids are estimated from perturbations they induce on the orbits of other asteroids, except for asteroids that have been visited by spacecraft or have an observable moon, where a direct mass calculation is possible. Different sets of astrometric observations lead to different mass determinations; the biggest problem is accounting for the aggregate perturbations caused by all of the smaller asteroids.[8] 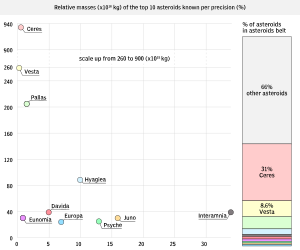 Chart showing the ten known asteroids in relation to their mass, the precision, and the percentage in the asteroid belt.[7]

Outside the top four, the ranking of all the asteroids is uncertain, as there is a great deal of overlap among the estimates.

For a more complete list, see List of Solar System objects by size. Other large asteroids such as 423 Diotima currently only have estimated masses.[10][11]

Only Vesta is regularly bright enough to be seen with the naked eye. Under ideal viewing conditions with very dark skies, a keen eye might be able to also see Ceres, as well as Pallas and Iris at their rare perihelic oppositions.[12] The following asteroids can all reach an apparent magnitude brighter than or equal to the +8.3 attained by Saturn's moon Titan at its brightest, which was discovered 145 years before the first asteroid was found owing to its closeness to the easily observed Saturn.

This list contains the slowest-rotating known minor planets with a period of at least 1000 hours, or 41​2⁄3 days, while most bodies have rotation periods between 2 and 20 hours. Also see Potentially slow rotators for minor planets with an insufficiently accurate period (U < 2).

This list contains the fastest-rotating minor planets with a period of less than 100 seconds, or 0.027 hours. Bodies with a highly uncertain period, having a quality of less than 2, are highlighted in dark-grey. The fastest rotating bodies are all unnumbered near-Earth objects (NEOs) with a diameter of less than 100 meters (see table).

^ the value given when the number of observations is multiplied by the observation arc; larger values are generally better than smaller values depending on residuals.

Surface resolved by telescope or lightcurve

The above table lists only numbered asteroids that are also comets. Note there are several cases where a non-numbered minor planets turned out to be a comet, e.g. C/2001 OG108 (LONEOS), which was provisionally designated 2001 OG108.

Minor planets that were misnamed and renamed

In earlier times, before the modern numbering and naming rules were in effect, asteroids were sometimes given numbers and names before their orbits were precisely known. And in a few cases duplicate names were given to the same object (with modern use of computers to calculate and compare orbits with old recorded positions, this type of error no longer occurs). This led to a few cases where asteroids had to be renamed.[22]

Asteroids were originally named after female mythological figures. Over time the rules loosened.

First asteroid with non-Classical and non-Latinized name: 64 Angelina (in honor of a research station)

First asteroid with a non-feminine name: 139 Juewa (ambiguous) or 141 Lumen

Many landmark numbers had specially chosen names for asteroids, and there was some debate about whether Pluto should have received number 10000, for example. This list includes some non-asteroids.