MS 0735.6+7421 is a galaxy cluster located in the constellation Camelopardalis, approximately 2.6 billion light-years away. It is notable as the location of one of the largest central galactic black holes in the known universe, which has also apparently produced the most powerful active galactic nucleus eruption discovered[2] until 2020 when evidence for the Ophiuchus Supercluster explosion of about five times the energy of the MS 0735.6+7421 eruption was published.[3]

Using data from the Chandra Space Telescope, scientists have deduced that an eruption has been occurring for the last 100 million years at the heart of the galaxy cluster, releasing as much energy over this time as hundreds of millions of gamma ray bursts.[2] (The amount of energy released in a year is thus equivalent to several GRBs.) The remnants of the eruption are seen as two cavities on either side of a large central galaxy. If this outburst, with a total energy budget of more than 1055 J, was caused by a black hole accretion event, it must have consumed nearly 600 million solar masses. Work done by Brian McNamara et al. (2008) point out the striking possibility that the outburst was not the result of an accretion event, but was instead powered by the rotation of the black hole. Moreover, the scientists mentioned the possibility that the central black hole in MS 0735.6+7421 could be one of the biggest black holes inhabiting the visible universe. This speculation is supported by the fact that the central cD Galaxy inside MS 0735.6+7421 possess the largest break radius known, as of today. With a calculated light deficit of more than 20 billion solar luminosities and an assumed light-to-mass ratio of 3, this yields a central black hole mass much above 10 billion solar masses, as far as the break radius was caused by the merger of several black holes in the past. In combination with the gargantuan energy outburst it is therefore very likely that MS 0735.6+7421 hosts a supermassive black hole in its core. The cluster has a red shift of 64,800 ± 900 km/s and an apparent size of 25′.[4] 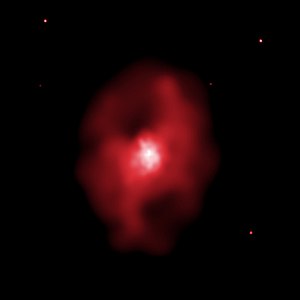 Chandra image of the hot X-ray emitting gas that pervades the galaxy cluster MS 0735.6+7421 in the constellation Camelopardalis. Two vast cavities - each 600,000 lyrs in diameter appear on opposite sides of a large galaxy at the center of the cluster. These cavities are filled with a two-sided, elongated, magnetized bubble of extremely high-energy electrons that emit radio waves. Image is 4.2 arcmin per side. RA 07h 41m 50.20s Dec +74° 14' 51.00". Observation date: November 30, 2003. Credit: NASA/CXC/Ohio U./B.McNamara.

Hot X-ray emitting gas pervades MS 0735.6+7421. Two vast cavities—each 600,000 ly in diameter—appear on opposite sides of a large galaxy at the center of the cluster. These cavities are filled with a two-sided, elongated, magnetized bubble of extremely high-energy electrons that emit radio waves.