The Chandra X-ray Observatory (CXO), previously known as the Advanced X-ray Astrophysics Facility (AXAF), is a Flagship-class space telescope launched aboard the Space Shuttle Columbia during STS-93 by NASA on July 23, 1999. Chandra is sensitive to X-ray sources 100 times fainter than any previous X-ray telescope, enabled by the high angular resolution of its mirrors. Since the Earth's atmosphere absorbs the vast majority of X-rays, they are not detectable from Earth-based telescopes; therefore space-based telescopes are required to make these observations. Chandra is an Earth satellite in a 64-hour orbit, and its mission is ongoing (As of 2022).

Chandra is one of the Great Observatories, along with the Hubble Space Telescope, Compton Gamma Ray Observatory (1991–2000), and the Spitzer Space Telescope (2003–2020). The telescope is named after the Nobel Prize-winning Indian-American astrophysicist Subrahmanyan Chandrasekhar.[7] Its mission is similar to that of ESA's XMM-Newton spacecraft, also launched in 1999 but the two telescopes have different design foci; Chandra has much higher angular resolution.

In 1976 the Chandra X-ray Observatory (called AXAF at the time) was proposed to NASA by Riccardo Giacconi and Harvey Tananbaum. Preliminary work began the following year at Marshall Space Flight Center (MSFC) and the Smithsonian Astrophysical Observatory (SAO), where the telescope is now operated for NASA[8] at the Chandra X-ray Center in the Harvard-Smithsonian Center for Astrophysics. In the meantime, in 1978, NASA launched the first imaging X-ray telescope, Einstein (HEAO-2), into orbit. Work continued on the AXAF project throughout the 1980s and 1990s. In 1992, to reduce costs, the spacecraft was redesigned. Four of the twelve planned mirrors were eliminated, as were two of the six scientific instruments. AXAF's planned orbit was changed to an elliptical one, reaching one third of the way to the Moon's at its farthest point. This eliminated the possibility of improvement or repair by the space shuttle but put the observatory above the Earth's radiation belts for most of its orbit. AXAF was assembled and tested by TRW (now Northrop Grumman Aerospace Systems) in Redondo Beach, California . 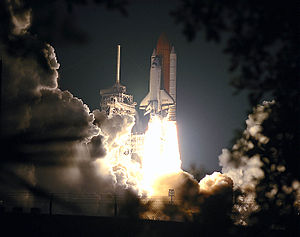 AXAF was renamed Chandra as part of a contest held by NASA in 1998, which drew more than 6,000 submissions worldwide.[9] The contest winners, Jatila van der Veen and Tyrel Johnson (then a high school teacher and high school student, respectively), suggested the name in honor of Nobel Prize–winning Indian-American astrophysicist Subrahmanyan Chandrasekhar. He is known for his work in determining the maximum mass of white dwarf stars, leading to greater understanding of high energy astronomical phenomena such as neutron stars and black holes.[7] Fittingly, the name Chandra means "moon" in Sanskrit.[10]

Originally scheduled to be launched in December 1998,[9] the spacecraft was delayed several months, eventually being launched on July 23, 1999, at 04:31 UTC by Space Shuttle Columbia during STS-93. Chandra was deployed by Cady Coleman[11] from Columbia at 11:47 UTC. The Inertial Upper Stage's first stage motor ignited at 12:48 UTC, and after burning for 125 seconds and separating, the second stage ignited at 12:51 UTC and burned for 117 seconds.[12] At 22,753 kilograms (50,162 lb),[1] it was the heaviest payload ever launched by the shuttle, a consequence of the two-stage Inertial Upper Stage booster rocket system needed to transport the spacecraft to its high orbit.

Chandra has been returning data since the month after it launched. It is operated by the SAO at the Chandra X-ray Center in Cambridge, Massachusetts, with assistance from MIT and Northrop Grumman Space Technology. The ACIS CCDs suffered particle damage during early radiation belt passages. To prevent further damage, the instrument is now removed from the telescope's focal plane during passages.

Although Chandra was initially given an expected lifetime of 5 years, on September 4, 2001, NASA extended its lifetime to 10 years "based on the observatory's outstanding results."[13] Physically Chandra could last much longer. A 2004 study performed at the Chandra X-ray Center indicated that the observatory could last at least 15 years.[14] It is active as of 2022 and has an upcoming schedule of observations [15] published by the Chandra X-ray Center

In July 2008, the International X-ray Observatory, a joint project between ESA, NASA and JAXA, was proposed as the next major X-ray observatory but was later cancelled.[16] ESA later resurrected a downsized version of the project as the Advanced Telescope for High Energy Astrophysics (ATHENA), with a proposed launch in 2028.[17]

On October 10, 2018, Chandra entered safe mode operations, due to a gyroscope glitch. NASA reported that all science instruments were safe.[18][19] Within days, the 3-second error in data from one gyro was understood, and plans were made to return Chandra to full service. The gyroscope that experienced the glitch was placed in reserve and is otherwise healthy.[20]

In 2020, Chandra reportedly may have made an observation of an exoplanet in the Whirlpool Galaxy, which would be the first planet discovered beyond the Milky Way.[21][22][23] 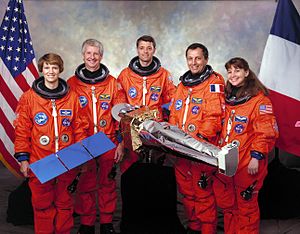 Crew of STS-93 with a scale model

The data gathered by Chandra has greatly advanced the field of X-ray astronomy. Here are some examples of discoveries supported by observations from Chandra:

CXO image of the brown dwarf TWA 5B

Assembly of the telescope 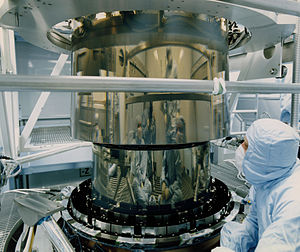 The main mirror of AXAF (Chandra)

Unlike optical telescopes which possess simple aluminized parabolic surfaces (mirrors), X-ray telescopes generally use a Wolter telescope consisting of nested cylindrical paraboloid and hyperboloid surfaces coated with iridium or gold. X-ray photons would be absorbed by normal mirror surfaces, so mirrors with a low grazing angle are necessary to reflect them. Chandra uses four pairs of nested mirrors, together with their support structure, called the High Resolution Mirror Assembly (HRMA); the mirror substrate is 2 cm-thick glass, with the reflecting surface a 33 nm iridium coating, and the diameters are 65 cm, 87 cm, 99 cm and 123 cm.[34] The thick substrate and particularly careful polishing allowed a very precise optical surface, which is responsible for Chandra's unmatched resolution: between 80% and 95% of the incoming X-ray energy is focused into a one-arcsecond circle. However, the thickness of the substrate limits the proportion of the aperture which is filled, leading to the low collecting area compared to XMM-Newton.

Chandra's highly elliptical orbit allows it to observe continuously for up to 55 hours of its 65-hour orbital period. At its furthest orbital point from Earth, Chandra is one of the most distant Earth-orbiting satellites. This orbit takes it beyond the geostationary satellites and beyond the outer Van Allen belt.[35]

With an angular resolution of 0.5 arcsecond (2.4 µrad), Chandra possesses a resolution over 1000 times better than that of the first orbiting X-ray telescope.

CXO uses mechanical gyroscopes,[36] which are sensors that help determine what direction the telescope is pointed.[37] Other navigation and orientation systems on board CXO include an aspect camera, Earth and Sun sensors, and reaction wheels. It also has two sets of thrusters, one for movement and another for offloading momentum.[37]

The Science Instrument Module (SIM) holds the two focal plane instruments, the Advanced CCD Imaging Spectrometer (ACIS) and the High Resolution Camera (HRC), moving whichever is called for into position during an observation.

ACIS consists of 10 CCD chips and provides images as well as spectral information of the object observed. It operates in the photon energy range of 0.2–10 keV. HRC has two micro-channel plate components and images over the range of 0.1–10 keV. It also has a time resolution of 16 microseconds. Both of these instruments can be used on their own or in conjunction with one of the observatory's two transmission gratings. 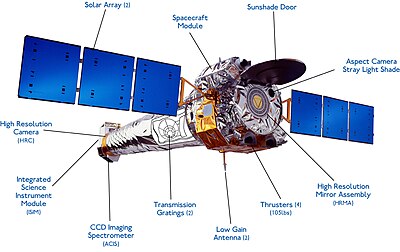