Right ascension (abbreviated RA; symbol α) is the angular distance of a particular point measured eastward along the celestial equator from the Sun at the March equinox to the (hour circle of the) point in question above the earth.[1] When paired with declination, these astronomical coordinates specify the location of a point on the celestial sphere in the equatorial coordinate system. 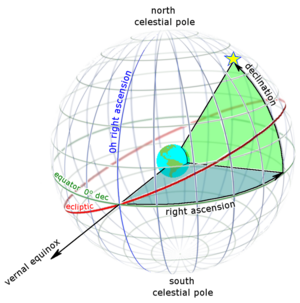 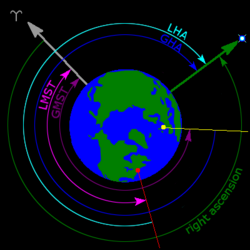 Various hour angles are depicted here. The symbol ♈︎ marks the March equinox direction.
Assuming the day of the year is the March equinox: the Sun lies toward the grey arrow, the star marked by a green arrow will appear to rise somewhere in the east about midnight (the Earth drawn from "above" turns anticlockwise). After the observer reaches the green arrow, dawn will over-power (see blue sky Rayleigh scattering) the star's light for about six hours, before it sets on the western horizon. The Right ascension of the star is about 18h. 18h means it is a March early-hours star and in blue sky in the morning. If 12h RA, the star would be a March all-night star as opposite the March equinox. If 6h RA the star would be a March late-hours star, at its high (meridian) at dusk.

As seen from Earth (except at the poles), objects noted to have 12h RA are longest visible (appear throughout the night) at the March equinox; those with 0h RA (apart from the sun) do so at the September equinox. On those dates at midnight, such objects will reach ("culminate" at) their highest point (their meridian). How high depends on their declination; if 0° declination (i.e. on the celestial equator) then at Earth's equator they are directly overhead (at zenith).

The Earth's axis traces a small circle (relative to its celestial equator) slowly westward about the celestial poles, completing one cycle in about 26,000 years. This movement, known as precession, causes the coordinates of stationary celestial objects to change continuously, if rather slowly. Therefore, equatorial coordinates (including right ascension) are inherently relative to the year of their observation, and astronomers specify them with reference to a particular year, known as an epoch. Coordinates from different epochs must be mathematically rotated to match each other, or to match a standard epoch.[7] Right ascension for "fixed stars" on the equator increases by about 3.1 seconds per year or 5.1 minutes per century, but for fixed stars away from the equator the rate of change can be anything from negative infinity to positive infinity. (To this must be added the proper motion of a star.) Over a precession cycle of 26,000 years, "fixed stars" that are far from the ecliptic poles increase in right ascension by 24h, or about 5.6' per century, whereas stars within 23.5° of an ecliptic pole undergo a net change of 0h. The right ascension of Polaris is increasing quickly—in AD 2000 it was 2.5h, but when it gets closest to the north celestial pole in 2100 its right ascension will be 6h. The North Ecliptic Pole in Draco and the South Ecliptic Pole in Dorado are always at right ascension 18h and 6h respectively.

How right ascension got its name. Ancient astronomy was very concerned with the rise and set of celestial objects. The ascension was the point on the celestial equator (red) which rose or set at the same time as an object (green) on the celestial sphere. As seen from the equator, both were on a great circle from pole to pole (left, sphaera recta or right sphere). From almost anywhere else, they were not (center, sphaera obliqua or oblique sphere). At the poles, objects did not rise or set (right, sphaera parallela or parallel sphere). An object's right ascension was its ascension on a right sphere.[9]

The concept of right ascension has been known at least as far back as Hipparchus who measured stars in equatorial coordinates in the 2nd century BC. But Hipparchus and his successors made their star catalogs in ecliptic coordinates, and the use of RA was limited to special cases.

With the invention of the telescope, it became possible for astronomers to observe celestial objects in greater detail, provided that the telescope could be kept pointed at the object for a period of time. The easiest way to do that is to use an equatorial mount, which allows the telescope to be aligned with one of its two pivots parallel to the Earth's axis. A motorized clock drive often is used with an equatorial mount to cancel out the Earth's rotation. As the equatorial mount became widely adopted for observation, the equatorial coordinate system, which includes right ascension, was adopted at the same time for simplicity. Equatorial mounts could then be accurately pointed at objects with known right ascension and declination by the use of setting circles. The first star catalog to use right ascension and declination was John Flamsteed's Historia Coelestis Britannica (1712, 1725). 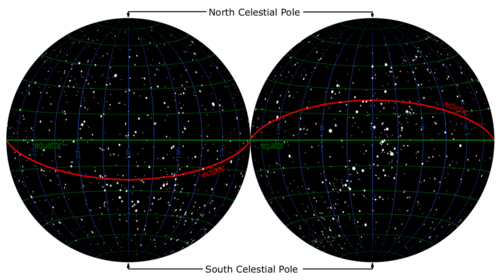 The entire sky, divided into two halves. Right ascension (blue) begins at the March equinox (at right, at the intersection of the ecliptic (red) and the equator (green)) and increases eastward (towards the left). The lines of right ascension (blue) from pole to pole divide the sky into 24 hours, each equivalent to 15°.