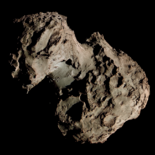 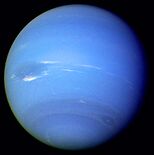 Selection of astronomical bodies and objects

Examples of astronomical objects include planetary systems, star clusters, nebulae, and galaxies, while asteroids, moons, planets, and stars are astronomical bodies. A comet may be identified as both body and object: It is a body when referring to the frozen nucleus of ice and dust, and an object when describing the entire comet with its diffuse coma and tail.

The universe can be viewed as having a hierarchical structure.[2] At the largest scales, the fundamental component of assembly is the galaxy. Galaxies are organized into groups and clusters, often within larger superclusters, that are strung along great filaments between nearly empty voids, forming a web that spans the observable universe.[3]

Galaxies have a variety of morphologies, with irregular, elliptical and disk-like shapes, depending on their formation and evolutionary histories, including interaction with other galaxies, which may lead to a merger.[4] Disc galaxies encompass lenticular and spiral galaxies with features, such as spiral arms and a distinct halo. At the core, most galaxies have a supermassive black hole, which may result in an active galactic nucleus. Galaxies can also have satellites in the form of dwarf galaxies and globular clusters.[5]

The constituents of a galaxy are formed out of gaseous matter that assembles through gravitational self-attraction in a hierarchical manner. At this level, the resulting fundamental components are the stars, which are typically assembled in clusters from the various condensing nebulae.[6] The great variety of stellar forms are determined almost entirely by the mass, composition and evolutionary state of these stars. Stars may be found in multi-star systems that orbit about each other in a hierarchical organization. A planetary system and various minor objects such as asteroids, comets and debris, can form in a hierarchical process of accretion from the protoplanetary disks that surround newly formed stars.

The various distinctive types of stars are shown by the Hertzsprung–Russell diagram (H–R diagram)—a plot of absolute stellar luminosity versus surface temperature. Each star follows an evolutionary track across this diagram. If this track takes the star through a region containing an intrinsic variable type, then its physical properties can cause it to become a variable star. An example of this is the instability strip, a region of the H-R diagram that includes Delta Scuti, RR Lyrae and Cepheid variables.[7] The evolving star may eject some portion of its atmosphere to form a nebula, either steadily to form a planetary nebula or in a supernova explosion that leaves a remnant. Depending on the initial mass of the star and the presence or absence of a companion, a star may spend the last part of its life as a compact object; either a white dwarf, neutron star, or black hole. 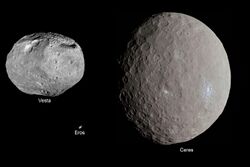 Composite image showing the round dwarf planet Ceres; the slightly smaller, mostly round Vesta; and the much smaller, much lumpier Eros

The IAU definitions of planet and dwarf planet require that a Sun-orbiting astronomical body has undergone the rounding process to reach a roughly spherical shape, an achievement known as hydrostatic equilibrium. The same spheroidal shape can be seen from smaller rocky planets like Mars to gas giants like Jupiter.

Any natural Sun-orbiting body that has reached hydrostatic equilibrium is classified by the IAU as a small Solar System body (SSSB). These come in many non-spherical shapes which are lumpy masses accreted haphazardly by in-falling dust and rock; not enough mass falls in to generate the heat needed to complete the rounding. Some SSSBs are just collections of relatively small rocks that are weakly held next to each other by gravity but are not actually fused into a single big bedrock. Some larger SSSBs are nearly round but have not reached hydrostatic equilibrium. The small Solar System body 4 Vesta is large enough to have undergone at least partial planetary differentiation.

Stars like the Sun are also spheroidal due to gravity's effects on their plasma, which is a free-flowing fluid. Ongoing stellar fusion is a much greater source of heat for stars compared to the initial heat released during formation.

The table below lists the general categories of bodies and objects by their location or structure.