Short description: Comparing the relative performance of computers by running the same program on all of them 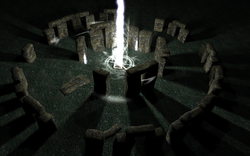 A graphical demo running as a benchmark of the OGRE engine.

In computing, a benchmark is the act of running a computer program, a set of programs, or other operations, in order to assess the relative performance of an object, normally by running a number of standard tests and trials against it.[1]

The term benchmark is also commonly utilized for the purposes of elaborately designed benchmarking programs themselves.

Benchmarking is usually associated with assessing performance characteristics of computer hardware, for example, the floating point operation performance of a CPU, but there are circumstances when the technique is also applicable to software. Software benchmarks are, for example, run against compilers or database management systems (DBMS).

Benchmarks provide a method of comparing the performance of various subsystems across different chip/system architectures.

As computer architecture advanced, it became more difficult to compare the performance of various computer systems simply by looking at their specifications. Therefore, tests were developed that allowed comparison of different architectures. For example, Pentium 4 processors generally operated at a higher clock frequency than Athlon XP or PowerPC processors, which did not necessarily translate to more computational power; a processor with a slower clock frequency might perform as well as or even better than a processor operating at a higher frequency. See BogoMips and the megahertz myth.

Benchmarks are particularly important in CPU design, giving processor architects the ability to measure and make tradeoffs in microarchitectural decisions. For example, if a benchmark extracts the key algorithms of an application, it will contain the performance-sensitive aspects of that application. Running this much smaller snippet on a cycle-accurate simulator can give clues on how to improve performance.

Prior to 2000, computer and microprocessor architects used SPEC to do this, although SPEC's Unix-based benchmarks were quite lengthy and thus unwieldy to use intact.

Computer manufacturers are known to configure their systems to give unrealistically high performance on benchmark tests that are not replicated in real usage. For instance, during the 1980s some compilers could detect a specific mathematical operation used in a well-known floating-point benchmark and replace the operation with a faster mathematically equivalent operation. However, such a transformation was rarely useful outside the benchmark until the mid-1990s, when RISC and VLIW architectures emphasized the importance of compiler technology as it related to performance. Benchmarks are now regularly used by compiler companies to improve not only their own benchmark scores, but real application performance.

CPUs that have many execution units — such as a superscalar CPU, a VLIW CPU, or a reconfigurable computing CPU — typically have slower clock rates than a sequential CPU with one or two execution units when built from transistors that are just as fast. Nevertheless, CPUs with many execution units often complete real-world and benchmark tasks in less time than the supposedly faster high-clock-rate CPU.

Given the large number of benchmarks available, a manufacturer can usually find at least one benchmark that shows its system will outperform another system; the other systems can be shown to excel with a different benchmark.

Ideally benchmarks should only substitute for real applications if the application is unavailable, or too difficult or costly to port to a specific processor or computer system. If performance is critical, the only benchmark that matters is the target environment's application suite.

Features of benchmarking software may include recording/exporting the course of performance to a spreadsheet file, visualization such as drawing line graphs or color-coded tiles, and pausing the process to be able to resume without having to start over. Software can have additional features specific to its purpose, for example, disk benchmarking software may be able to optionally start measuring the disk speed within a specified range of the disk rather than the full disk, measure random access reading speed and latency, have a "quick scan" feature which measures the speed through samples of specified intervals and sizes, and allow specifying a data block size, meaning the number of requested bytes per read request.[2]

Benchmarking is not easy and often involves several iterative rounds in order to arrive at predictable, useful conclusions. Interpretation of benchmarking data is also extraordinarily difficult. Here is a partial list of common challenges:

There are seven vital characteristics for benchmarks.[5] These key properties are: