In the mathematical discipline of graph theory, the line graph of an undirected graph G is another graph L(G) that represents the adjacencies between edges of G. The name line graph comes from a paper by (Harary Norman) although both (Whitney 1932) and (Krausz 1943) used the construction before this.[1] Other terms used for the line graph include the covering graph, the derivative, the edge-to-vertex dual, the conjugate, the representative graph, and the ϑ-obrazom,[1] as well as the edge graph, the interchange graph, the adjoint graph, and the derived graph.[2]

Given a graph G, its line graph L(G) is a graph such that

That is, it is the intersection graph of the edges of G, representing each edge by the set of its two endpoints.[2]

The following figures show a graph (left, with blue vertices) and its line graph (right, with green vertices). Each vertex of the line graph is shown labeled with the pair of endpoints of the corresponding edge in the original graph. For instance, the green vertex on the right labeled 1,3 corresponds to the edge on the left between the blue vertices 1 and 3. Green vertex 1,3 is adjacent to three other green vertices: 1,4 and 1,2 (corresponding to edges sharing the endpoint 1 in the blue graph) and 4,3 (corresponding to an edge sharing the endpoint 3 in the blue graph).

Translated properties of the underlying graph

The diamond graph, an exception to the strong Whitney theorem

As well as K3 and K1,3, there are some other exceptional small graphs with the property that their line graph has a higher degree of symmetry than the graph itself. For instance, the diamond graph K1,1,2 (two triangles sharing an edge) has four graph automorphisms but its line graph K1,2,2 has eight. In the illustration of the diamond graph shown, rotating the graph by 90 degrees is not a symmetry of the graph, but is a symmetry of its line graph. However, all such exceptional cases have at most four vertices. A strengthened version of the Whitney isomorphism theorem states that, for connected graphs with more than four vertices, there is a one-to-one correspondence between isomorphisms of the graphs and isomorphisms of their line graphs.[11]

Analogues of the Whitney isomorphism theorem have been proven for the line graphs of multigraphs, but are more complicated in this case.[12] 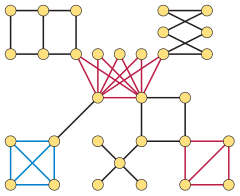 The line graph of the complete graph Kn is also known as the triangular graph, the Johnson graph J(n,2), or the complement of the Kneser graph KGn,2. Triangular graphs are characterized by their spectra, except for n = 8.[13] They may also be characterized (again with the exception of K8) as the strongly regular graphs with parameters srg(n(n − 1)/2, 2(n − 2), n − 2, 4).[14] The three strongly regular graphs with the same parameters and spectrum as L(K8) are the Chang graphs, which may be obtained by graph switching from L(K8).

The line graph of a bipartite graph is perfect (see Kőnig's theorem), but need not be bipartite as the example of the claw graph shows. The line graphs of bipartite graphs form one of the key building blocks of perfect graphs, used in the proof of the strong perfect graph theorem.[15] A special case of these graphs are the rook's graphs, line graphs of complete bipartite graphs. Like the line graphs of complete graphs, they can be characterized with one exception by their numbers of vertices, numbers of edges, and number of shared neighbors for adjacent and non-adjacent points. The one exceptional case is L(K4,4), which shares its parameters with the Shrikhande graph. When both sides of the bipartition have the same number of vertices, these graphs are again strongly regular.[16]

All line graphs are claw-free graphs, graphs without an induced subgraph in the form of a three-leaf tree.[20] As with claw-free graphs more generally, every connected line graph L(G) with an even number of edges has a perfect matching;[21] equivalently, this means that if the underlying graph G has an even number of edges, its edges can be partitioned into two-edge paths.

The line graphs of trees are exactly the claw-free block graphs.[22] These graphs have been used to solve a problem in extremal graph theory, of constructing a graph with a given number of edges and vertices whose largest tree induced as a subgraph is as small as possible.[23]

Partition of a line graph into cliques

For an arbitrary graph G, and an arbitrary vertex v in G, the set of edges incident to v corresponds to a clique in the line graph L(G). The cliques formed in this way partition the edges of L(G). Each vertex of L(G) belongs to exactly two of them (the two cliques corresponding to the two endpoints of the corresponding edge in G).

The existence of such a partition into cliques can be used to characterize the line graphs: A graph L is the line graph of some other graph or multigraph if and only if it is possible to find a collection of cliques in L (allowing some of the cliques to be single vertices) that partition the edges of L, such that each vertex of L belongs to exactly two of the cliques.[20] It is the line graph of a graph (rather than a multigraph) if this set of cliques satisfies the additional condition that no two vertices of L are both in the same two cliques. Given such a family of cliques, the underlying graph G for which L is the line graph can be recovered by making one vertex in G for each clique, and an edge in G for each vertex in L with its endpoints being the two cliques containing the vertex in L. By the strong version of Whitney's isomorphism theorem, if the underlying graph G has more than four vertices, there can be only one partition of this type.

For example, this characterization can be used to show that the following graph is not a line graph:

In this example, the edges going upward, to the left, and to the right from the central degree-four vertex do not have any cliques in common. Therefore, any partition of the graph's edges into cliques would have to have at least one clique for each of these three edges, and these three cliques would all intersect in that central vertex, violating the requirement that each vertex appear in exactly two cliques. Thus, the graph shown is not a line graph.

The nine minimal non-line graphs, from Beineke's forbidden-subgraph characterization of line graphs. A graph is a line graph if and only if it does not contain one of these nine graphs as an induced subgraph.

Another characterization of line graphs was proven in (Beineke 1970) (and reported earlier without proof by (Beineke 1968)). He showed that there are nine minimal graphs that are not line graphs, such that any graph that is not a line graph has one of these nine graphs as an induced subgraph. That is, a graph is a line graph if and only if no subset of its vertices induces one of these nine graphs. In the example above, the four topmost vertices induce a claw (that is, a complete bipartite graph K1,3), shown on the top left of the illustration of forbidden subgraphs. Therefore, by Beineke's characterization, this example cannot be a line graph. For graphs with minimum degree at least 5, only the six subgraphs in the left and right columns of the figure are needed in the characterization.[25]

(Roussopoulos 1973) and (Lehot 1974) described linear time algorithms for recognizing line graphs and reconstructing their original graphs. (Sysło 1982) generalized these methods to directed graphs. (Degiorgi Simon) described an efficient data structure for maintaining a dynamic graph, subject to vertex insertions and deletions, and maintaining a representation of the input as a line graph (when it exists) in time proportional to the number of changed edges at each step.

The algorithms of (Roussopoulos 1973) and (Lehot 1974) are based on characterizations of line graphs involving odd triangles (triangles in the line graph with the property that there exists another vertex adjacent to an odd number of triangle vertices). However, the algorithm of (Degiorgi Simon) uses only Whitney's isomorphism theorem. It is complicated by the need to recognize deletions that cause the remaining graph to become a line graph, but when specialized to the static recognition problem only insertions need to be performed, and the algorithm performs the following steps:

They show that, when G is a finite connected graph, only four behaviors are possible for this sequence:

If G is not connected, this classification applies separately to each component of G.

When a planar graph G has maximum vertex degree three, its line graph is planar, and every planar embedding of G can be extended to an embedding of L(G). However, there exist planar graphs with higher degree whose line graphs are nonplanar. These include, for example, the 5-star K1,5, the gem graph formed by adding two non-crossing diagonals within a regular pentagon, and all convex polyhedra with a vertex of degree four or more.[28]

For regular polyhedra or simple polyhedra, the medial graph operation can be represented geometrically by the operation of cutting off each vertex of the polyhedron by a plane through the midpoints of all its incident edges.[30] This operation is known variously as the second truncation,[31] degenerate truncation,[32] or rectification.[33]

The total graph T(G) of a graph G has as its vertices the elements (vertices or edges) of G, and has an edge between two elements whenever they are either incident or adjacent. The total graph may also be obtained by subdividing each edge of G and then taking the square of the subdivided graph.[34]

However, for multigraphs, there are larger numbers of pairs of non-isomorphic graphs that have the same line graphs. For instance a complete bipartite graph K1,n has the same line graph as the dipole graph and Shannon multigraph with the same number of edges. Nevertheless, analogues to Whitney's isomorphism theorem can still be derived in this case.[12] 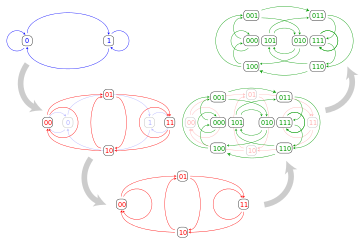 Construction of the de Bruijn graphs as iterated line digraphs