In computing, a virtual machine (VM) is the virtualization/emulation of a computer system. Virtual machines are based on computer architectures and provide functionality of a physical computer. Their implementations may involve specialized hardware, software, or a combination.

Virtual machines differ and are organized by their function, shown here:

Some virtual machine emulators, such as QEMU and video game console emulators, are designed to also emulate (or "virtually imitate") different system architectures thus allowing execution of software applications and operating systems written for another CPU or architecture. Operating-system-level virtualization allows the resources of a computer to be partitioned via the kernel. The terms are not universally interchangeable.

A "virtual machine" was originally defined by Popek and Goldberg as "an efficient, isolated duplicate of a real computer machine."[1] Current use includes virtual machines that have no direct correspondence to any real hardware.[2] The physical, "real-world" hardware running the VM is generally referred to as the 'host', and the virtual machine emulated on that machine is generally referred to as the 'guest'. A host can emulate several guests, each of which can emulate different operating systems and hardware platforms.

The desire to run multiple operating systems was the initial motive for virtual machines, so as to allow time-sharing among several single-tasking operating systems. In some respects, a system virtual machine can be considered a generalization of the concept of virtual memory that historically preceded it. IBM's CP/CMS, the first systems to allow full virtualization, implemented time sharing by providing each user with a single-user operating system, the Conversational Monitor System (CMS). Unlike virtual memory, a system virtual machine entitled the user to write privileged instructions in their code. This approach had certain advantages, such as adding input/output devices not allowed by the standard system.[2]

A process VM, sometimes called an application virtual machine, or Managed Runtime Environment (MRE), runs as a normal application inside a host OS and supports a single process. It is created when that process is started and destroyed when it exits. Its purpose is to provide a platform-independent programming environment that abstracts away details of the underlying hardware or operating system and allows a program to execute in the same way on any platform.

This type of VM has become popular with the Java programming language, which is implemented using the Java virtual machine. Other examples include the Parrot virtual machine and the .NET Framework, which runs on a VM called the Common Language Runtime. All of them can serve as an abstraction layer for any computer language.

A special case of process VMs are systems that abstract over the communication mechanisms of a (potentially heterogeneous) computer cluster. Such a VM does not consist of a single process, but one process per physical machine in the cluster. They are designed to ease the task of programming concurrent applications by letting the programmer focus on algorithms rather than the communication mechanisms provided by the interconnect and the OS. They do not hide the fact that communication takes place, and as such do not attempt to present the cluster as a single machine.

Unlike other process VMs, these systems do not provide a specific programming language, but are embedded in an existing language; typically such a system provides bindings for several languages (e.g., C and Fortran). Examples are Parallel Virtual Machine (PVM) and Message Passing Interface (MPI). They are not strictly virtual machines because the applications running on top still have access to all OS services and are therefore not confined to the system model.

System virtual machines grew out of time-sharing, as notably implemented in the Compatible Time-Sharing System (CTSS). Time-sharing allowed multiple users to use a computer concurrently: each program appeared to have full access to the machine, but only one program was executed at the time, with the system switching between programs in time slices, saving and restoring state each time. This evolved into virtual machines, notably via IBM's research systems: the M44/44X, which used partial virtualization, and the CP-40 and SIMMON, which used full virtualization, and were early examples of hypervisors. The first widely available virtual machine architecture was the CP-67/CMS (see History of CP/CMS for details). An important distinction was between using multiple virtual machines on one host system for time-sharing, as in M44/44X and CP-40, and using one virtual machine on a host system for prototyping, as in SIMMON. Emulators, with hardware emulation of earlier systems for compatibility, date back to the IBM System/360 in 1963,[6][7] while the software emulation (then-called "simulation") predates it.

Process virtual machines arose originally as abstract platforms for an intermediate language used as the intermediate representation of a program by a compiler; early examples date to around 1966. An early 1966 example was the O-code machine, a virtual machine that executes O-code (object code) emitted by the front end of the BCPL compiler. This abstraction allowed the compiler to be easily ported to a new architecture by implementing a new back end that took the existing O-code and compiled it to machine code for the underlying physical machine. The Euler language used a similar design, with the intermediate language named P (portable).[8] This was popularized around 1970 by Pascal, notably in the Pascal-P system (1973) and Pascal-S compiler (1975), in which it was termed p-code and the resulting machine as a p-code machine. This has been influential, and virtual machines in this sense have been often generally called p-code machines. In addition to being an intermediate language, Pascal p-code was also executed directly by an interpreter implementing the virtual machine, notably in UCSD Pascal (1978); this influenced later interpreters, notably the Java virtual machine (JVM). Another early example was SNOBOL4 (1967), which was written in the SNOBOL Implementation Language (SIL), an assembly language for a virtual machine, which was then targeted to physical machines by transpiling to their native assembler via a macro assembler.[9] Macros have since fallen out of favor, however, so this approach has been less influential. Process virtual machines were a popular approach to implementing early microcomputer software, including Tiny BASIC and adventure games, from one-off implementations such as Pyramid 2000 to a general-purpose engine like Infocom's z-machine, which Graham Nelson argues is "possibly the most portable virtual machine ever created".[10]

Significant advances occurred in the implementation of Smalltalk-80,[11] particularly the Deutsch/Schiffmann implementation[12] which pushed just-in-time (JIT) compilation forward as an implementation approach that uses process virtual machine.[13] Later notable Smalltalk VMs were VisualWorks, the Squeak Virtual Machine,[14] and Strongtalk.[15] A related language that produced a lot of virtual machine innovation was the Self programming language,[16] which pioneered adaptive optimization[17] and generational garbage collection. These techniques proved commercially successful in 1999 in the HotSpot Java virtual machine.[18] Other innovations include having a register-based virtual machine, to better match the underlying hardware, rather than a stack-based virtual machine, which is a closer match for the programming language; in 1995, this was pioneered by the Dis virtual machine for the Limbo language. OpenJ9 is an alternative for HotSpot JVM in OpenJDK and is an open source eclipse project claiming better startup and less resource consumption compared to HotSpot. 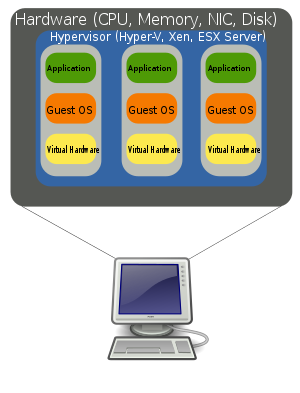 In full virtualization, the virtual machine simulates enough hardware to allow an unmodified "guest" OS (one designed for the same instruction set) to be run in isolation. This approach was pioneered in 1966 with the IBM CP-40 and CP-67, predecessors of the VM family.

In hardware-assisted virtualization, the hardware provides architectural support that facilitates building a virtual machine monitor and allows guest OSes to be run in isolation.[19] Hardware-assisted virtualization was first introduced on the IBM System/370 in 1972, for use with VM/370, the first virtual machine operating system offered by IBM as an official product.[20]