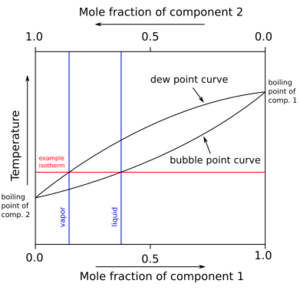 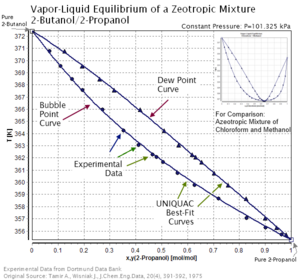 When superheating a substance, nucleate pool boiling and convective flow boiling occur when the temperature of the surface used to heat a liquid is higher than the liquid's boiling point by the wall superheat.[10] 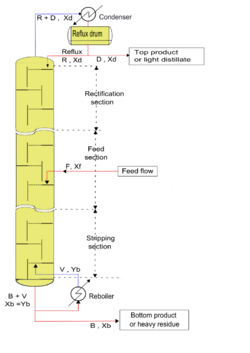 The ideal case of distillation uses zeotropic mixtures.[14] Zeotropic fluid and gaseous mixtures can be separated by distillation due to the difference in boiling points between the component mixtures.[14][15] This process involves the use of vertically-arranged distillation columns (see Figure 2).[15]

When separating zeotropic mixtures with three or greater liquid components, each distillation column removes only the lowest-boiling point component and the highest boiling point component.[15] In other words, each column separates two components purely.[14] If three substances are separated with a single column, the substance with the intermediate boiling point will not be purely separated,[14] and a second column would be needed.[14] To separate mixtures consisting of multiple substances, a sequence of distillation columns must be used.[15] This multi-step distillation process is also called rectification.[15]

In each distillation column, pure components form at the top (rectifying section) and bottom (stripping section) of the column when the starting liquid (called feed composition) is released in the middle of the column.[15] This is shown in Figure 2. At a certain temperature, the component with the lowest boiling point (called distillate or overhead fraction) vaporizes and collects at the top of the column, whereas the component with the highest boiling point (called bottoms or bottom fraction) collects at the bottom of the column.[15] In a zeotropic mixture, where more than one component exists, individual components move relative to each other as vapor flows up and liquid falls down.[15]

When designing distillation processes for separating zeotropic mixtures, the sequencing of distillation columns is vital to saving energy and costs.[16] In addition, other methods can be used to lower the energy or equipment costs required to distill zeotropic mixtures.[16] This includes combining distillation columns, using side columns, combining main columns with side columns, and re-using waste heat for the system.[16] After combining distillation columns, the amount of energy used is only that of one separated column rather than both columns combined.[16] In addition, using side columns saves energy by preventing different columns from carrying out the same separation of mixtures.[16] Combining main and side columns saves equipment costs by reducing the number of heat exchangers in the system.[16] Re-using waste heat requires the amount of heat and temperature levels of the waste to match that of the heat needed.[16] Thus, using waste heat requires changing the pressure inside evaporators and condensers of the distillation system in order to control the temperatures needed.[16] Controlling the temperature levels in a part of a system is possible with Pinch Technology.[17] These energy-saving techniques have a wide application in industrial distillation of zeotropic mixtures: side columns have been used to refine crude oil, and combining main and side columns is increasingly used.[16]

Zeotropic mixtures that are used in refrigeration are assigned a number in the 400 series to help identify its component and their proportions as a part of nomenclature. Whereas for azeotropic mixtures they are assigned a number in the 500 series. According to ASHRAE, refrigerants names start with 'R' followed by a series of numbers—400 series if it is zeotropic or 500 if it is azeotropic—followed by uppercase letters that denote the composition.[18]

Research has proposed using zeotropic mixtures as substitutes to halogenated refrigerants due to the harmful effects that hydrochlorofluorocarbons (HCFC) and chlorofluorocarbons (CFC) have on the ozone layer and global warming.[3] Researchers have focused on using new mixtures that have the same properties as past refrigerants to phase out harmful halogenated substances, in accordance to the Montreal Protocol and Kyoto Protocol.[3] For example, researchers found that zeotropic mixture R-404A can replace R-12, a CFC, in household refrigerators.[19] However, there are some technical difficulties for using zeotropic mixtures.[3] This includes leakages, as well as the high temperature glide associated with substances of different boiling points,[3] though the temperature glide can be matched to the temperature difference between the two refrigerants when exchanging heat to increase efficiency.[5] Replacing pure refrigerants with mixtures calls for more research on the environmental impact as well as the flammability and safety of refrigerant mixtures.[3]

Cosolvent systems are used for heavy oils, waxes, greases and fingerprints,[22][23] and can remove heavier soils than processes that use pure or azeotropic solvents.[23] Cosolvent systems are flexible in that different proportions of substances in the zeotropic mixture can be used to satisfy different cleaning purposes.[23] For example, increasing the proportion of solvating agent to rinsing agent in the mixture increases the solvency, and thus is used for removing heavier soils.[22][23]