Short description: Temperature at which a substance changes from liquid into vapor

The boiling point of a substance is the temperature at which the vapor pressure of a liquid equals the pressure surrounding the liquid[1][2] and the liquid changes into a vapor.

The heat of vaporization is the energy required to transform a given quantity (a mol, kg, pound, etc.) of a substance from a liquid into a gas at a given pressure (often atmospheric pressure).

Liquids may change to a vapor at temperatures below their boiling points through the process of evaporation. Evaporation is a surface phenomenon in which molecules located near the liquid's edge, not contained by enough liquid pressure on that side, escape into the surroundings as vapor. On the other hand, boiling is a process in which molecules anywhere in the liquid escape, resulting in the formation of vapor bubbles within the liquid.

If the heat of vaporization and the vapor pressure of a liquid at a certain temperature are known, the boiling point can be calculated by using the Clausius–Clapeyron equation, thus: 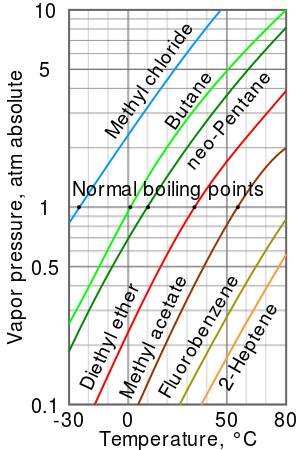 The higher the vapor pressure of a liquid at a given temperature, the lower the normal boiling point (i.e., the boiling point at atmospheric pressure) of the liquid.

The critical point of a liquid is the highest temperature (and pressure) it will actually boil at.

Properties of the elements

The element with the lowest boiling point is helium. Both the boiling points of rhenium and tungsten exceed 5000 K at standard pressure; because it is difficult to measure extreme temperatures precisely without bias, both have been cited in the literature as having the higher boiling point.[11]

Boiling point as a reference property of a pure compound 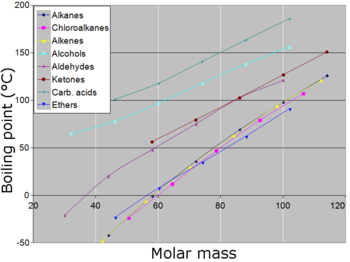 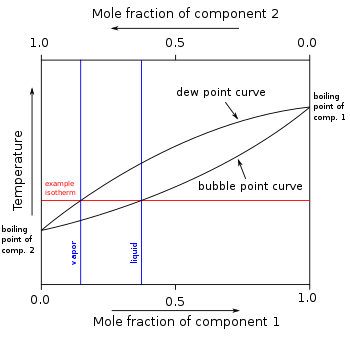 Most volatile compounds (anywhere near ambient temperatures) go through an intermediate liquid phase while warming up from a solid phase to eventually transform to a vapor phase. By comparison to boiling, a sublimation is a physical transformation in which a solid turns directly into vapor, which happens in a few select cases such as with carbon dioxide at atmospheric pressure. For such compounds, a sublimation point is a temperature at which a solid turning directly into vapor has a vapor pressure equal to the external pressure.

In the preceding section, boiling points of pure compounds were covered. Vapor pressures and boiling points of substances can be affected by the presence of dissolved impurities (solutes) or other miscible compounds, the degree of effect depending on the concentration of the impurities or other compounds. The presence of non-volatile impurities such as salts or compounds of a volatility far lower than the main component compound decreases its mole fraction and the solution's volatility, and thus raises the normal boiling point in proportion to the concentration of the solutes. This effect is called boiling point elevation. As a common example, salt water boils at a higher temperature than pure water.

In other mixtures of miscible compounds (components), there may be two or more components of varying volatility, each having its own pure component boiling point at any given pressure. The presence of other volatile components in a mixture affects the vapor pressures and thus boiling points and dew points of all the components in the mixture. The dew point is a temperature at which a vapor condenses into a liquid. Furthermore, at any given temperature, the composition of the vapor is different from the composition of the liquid in most such cases. In order to illustrate these effects between the volatile components in a mixture, a boiling point diagram is commonly used. Distillation is a process of boiling and [usually] condensation which takes advantage of these differences in composition between liquid and vapor phases.