In three dimensional geometry, there are four infinite series of point groups in three dimensions (n≥1) with n-fold rotational or reflectional symmetry about one axis (by an angle of 360°/n) that does not change the object.

They are the finite symmetry groups on a cone. For n = ∞ they correspond to four frieze groups. Schönflies notation is used. The terms horizontal (h) and vertical (v) imply the existence and direction of reflections with respect to a vertical axis of symmetry. Also shown are Coxeter notation in brackets, and, in parentheses, orbifold notation. 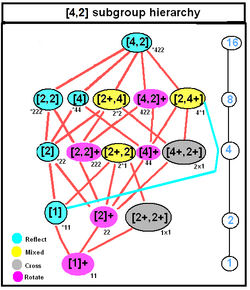 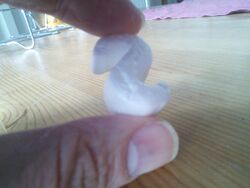 In the limit these four groups represent Euclidean plane frieze groups as C∞, C∞h, C∞v, and S∞. Rotations become translations in the limit. Portions of the infinite plane can also be cut and connected into an infinite cylinder.