Conglomerate (/kənˈɡlɒmərɪt/) is a clastic sedimentary rock that is composed of a substantial fraction of rounded to subangular gravel-size clasts. A conglomerate typically contain a matrix of finer grained sediments, such as sand, silt, or clay, which fills the interstices between the clasts. The clasts and matrix are typically cemented by calcium carbonate, iron oxide, silica, or hardened clay.

Conglomerates form by the consolidation and lithification of gravel. They can be found in sedimentary rock sequences of all ages but probably make up less than 1 percent by weight of all sedimentary rocks. In terms of origin and depositional mechanisms, they are closely related to sandstones and exhibit many of the same types of sedimentary structures, e.g., tabular and trough cross-bedding and graded bedding.[1][2][3]

Fanglomerates are poorly sorted, matrix-rich conglomerates that originated as debris flows on alluvial fans and likely contain the largest accumulations of gravel in the geologic record.[4]

Conglomerates may be named and classified by the:

The classification method depends on the type and detail of research being conducted.[1][2][5] 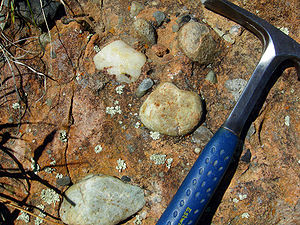 A conglomerate at the base of the Cambrian in the Black Hills, South Dakota. 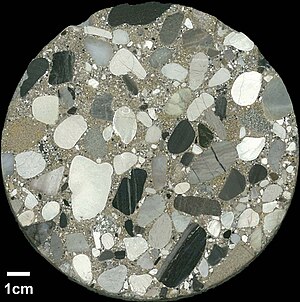 Conglomerates are deposited in a variety of sedimentary environments.

In turbidites, the basal part of a bed is typically coarse-grained and sometimes conglomeratic. In this setting, conglomerates are normally very well sorted, well-rounded and often with a strong A-axis type imbrication of the clasts.[9]

Conglomerates are normally present at the base of sequences laid down during marine transgressions above an unconformity, and are known as basal conglomerates. They represent the position of the shoreline at a particular time and are diachronous.[10]

Conglomerates deposited in fluvial environments are typically well rounded and well sorted. Clasts of this size are carried as bedload and only at times of high flow-rate. The maximum clast size decreases as the clasts are transported further due to attrition, so conglomerates are more characteristic of immature river systems. In the sediments deposited by mature rivers, conglomerates are generally confined to the basal part of a channel fill where they are known as pebble lags.[11] Conglomerates deposited in a fluvial environment often have an AB-plane type imbrication.

Glaciers carry a lot of coarse-grained material and many glacial deposits are conglomeratic. tillites, the sediments deposited directly by a glacier, are typically poorly sorted, matrix-supported conglomerates. The matrix is generally fine-grained, consisting of finely milled rock fragments. Waterlaid deposits associated with glaciers are often conglomeratic, forming structures such as eskers.[11]

An example of conglomerate can be seen at Montserrat, near Barcelona . Here, erosion has created vertical channels that give the characteristic jagged shapes the mountain is named for (Montserrat literally means "jagged mountain"). The rock is strong enough to use as a building material, as in the Santa Maria de Montserrat Abbey.

Another example, the Crestone Conglomerate, occurs in and near the town of Crestone, at the foot of the Sangre de Cristo Range in Colorado's San Luis Valley. The Crestone Conglomerate consists of poorly sorted fanglomerates that accumulated in prehistoric alluvial fans and related fluvial systems. Some of these rocks have hues of red and green.

Conglomerate cliffs are found on the east coast of Scotland from Arbroath northwards along the coastlines of the former counties of Angus and Kincardineshire. Dunnottar Castle sits on a rugged promontory of conglomerate jutting into the North Sea just south of the town of Stonehaven.

Copper Harbor Conglomerate is found both in the Keweenaw Peninsula and Isle Royale National Park in Lake Superior.

Conglomerate may also be seen in the domed hills of Kata Tjuta, in Australia's Northern Territory[12] or in the Buda Hills in Hungary.[13]

In the nineteenth century a thick layer of Pottsville conglomerate was recognized to underlie anthracite coal measures in Pennsylvania.[14]

On Mars, slabs of conglomerate have been found at an outcrop named "Hottah", and have been interpreted by scientists as having formed in an ancient streambed. The gravels, which were discovered by NASA's Mars rover Curiosity, range from the size of sand particles to the size of golf balls. Analysis has shown that the pebbles were deposited by a stream that flowed at walking pace and was ankle- to hip-deep.[15]