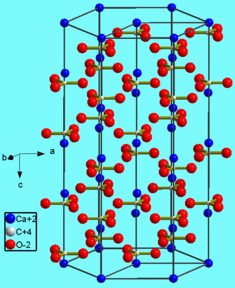 Calcite is a carbonate mineral and the most stable polymorph of calcium carbonate (CaCO3). The Mohs scale of mineral hardness, based on scratch hardness comparison, defines value 3 as "calcite".

Other polymorphs of calcium carbonate are the minerals aragonite and vaterite. Aragonite will change to calcite over timescales of days or less at temperatures exceeding 300 °C,[5][6] and vaterite is even less stable.

Calcite is derived from the German Calcit, a term from the 19th century that came from the Latin word for lime, calx (genitive calcis) with the suffix "-ite" used to name minerals. It is thus etymologically related to chalk.[7]

When applied by archaeologists and stone trade professionals, the term alabaster is used not just as in geology and mineralogy, where it is reserved for a variety of gypsum; but also for a similar-looking, translucent variety of fine-grained banded deposit of calcite.[8]

In publications, two different sets of Miller indices are used to describe directions in calcite crystals - the hexagonal system with three indices h, k, l and the rhombohedral system with four indices h, k, l, i. To add to the complications, there are also two definitions of unit cell for calcite. One, an older "morphological" unit cell, was inferred by measuring angles between faces of crystals and looking for the smallest numbers that fit. Later, a "structural" unit cell was determined using X-ray crystallography. The morphological unit cell has approximate dimensions a = 10 Å and c = 8.5 Å, while for the structural unit cell they are a = 5 Å and c = 17 Å. For the same orientation, c must be multiplied by 4 to convert from morphological to structural units. As an example, the cleavage is given as "perfect on {1 0 1 1}" in morphological coordinates and "perfect on {1 0 1 4}" in structural units. (In hexagonal indices, these are {1 0 1} and {1 0 4}.) Twinning, cleavage and crystal forms are always given in morphological units.[3][9]

The diagnostic properties of calcite include a defining Mohs hardness of 3, a specific gravity of 2.71 and, in crystalline varieties, a vitreous luster. Color is white or none, though shades of gray, red, orange, yellow, green, blue, violet, brown, or even black can occur when the mineral is charged with impurities.[3]

Over 800 habits of calcite crystals have been identified. Most common are scalenohedra, with faces in the hexagonal {2 1 1} directions (morphological unit cell) or {2 1 4} directions (structural unit cell); and rhombohedral, with faces in the {1 0 1} or {1 0 4} directions (the most common cleavage plane).[9] Forms include acute to obtuse rhombohedra, tabular forms, prisms, or various scalenohedra. Calcite exhibits several twinning types adding to the variety of observed forms. It may occur as fibrous, granular, lamellar, or compact. A fibrous, efflorescent form is known as lublinite.[10] Cleavage is usually in three directions parallel to the rhombohedron form. Its fracture is conchoidal, but difficult to obtain.

Scalenohedral faces are chiral and come in pairs with mirror-image symmetry; their growth can be influenced by interaction with chiral biomolecules such as L- and D-amino acids. Rhombohedral faces are achiral.[9] 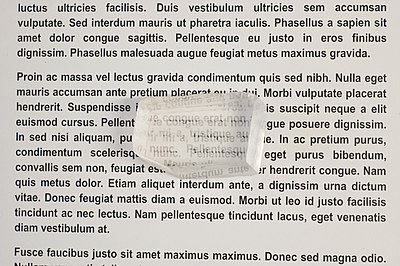 Calcite is transparent to opaque and may occasionally show phosphorescence or fluorescence. A transparent variety called Iceland spar is used for optical purposes. Acute scalenohedral crystals are sometimes referred to as "dogtooth spar" while the rhombohedral form is sometimes referred to as "nailhead spar".[11] The rhombohedral form may also have been the "sunstone" whose use by Viking navigators is mentioned in the Icelandic Sagas.[12]

Calcite, like most carbonates, will dissolve in acids via the reaction

The carbon dioxide released by this reaction produces a characteristic effervescence when dilute hydrochloric acid is dropped on a calcite sample.

Ambient carbon dioxide, due to its acidity, has a slight solubilizing effect on calcite. The overall reaction is

If the amount of dissolved carbon dioxide drops, the reaction reverses to precipitate calcite. As a result, calcite can be either dissolved by groundwater or precipitated by groundwater, depending on such factors as the water temperature, pH, and dissolved ion concentrations. When conditions are right for precipitation, calcite forms mineral coatings that cement rock grains together and can fill fractures. When conditions are right for dissolution, the removal of calcite can dramatically increase the porosity and permeability of the rock, and if it continues for a long period of time, may result in the formation of caves. Continued dissolution of calcium carbonate-rich formations can lead to the expansion and eventual collapse of cave systems, resulting in various forms of karst topography.[15]

Calcite exhibits an unusual characteristic called retrograde solubility in which it becomes less soluble in water as the temperature increases. Calcite is also more soluble at higher pressures.[16]

Pure calcite has the composition CaCO
3. However, the calcite in limestone often contains a few percent of magnesium. Calcite in limestone is divided into low-magnesium and high-magnesium calcite, with the dividing line placed at a composition of 4% magnesium. High-magnesium calcite retains the calcite mineral structure, which is distinct from that of dolomite, MgCa(CO
3)
2.[17] Calcite can also contain small quantities of iron and manganese.[18] Manganese may be responsible for the fluorescence of impure calcite, as may traces of organic compounds.[19] 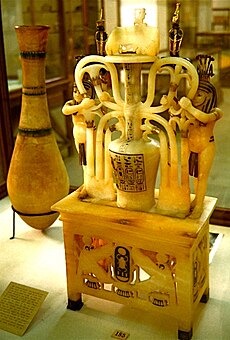 One of several calcite or alabaster perfume jars from the tomb of Tutankhamun, d. 1323 BC

Ancient Egyptians carved many items out of calcite, relating it to their goddess Bast, whose name contributed to the term alabaster because of the close association. Many other cultures have used the material for similar carved objects and applications.[20]

A transparent variety of calcite known as Iceland spar may have been used by Vikings for navigating on cloudy days.[21]

High-grade optical calcite was used in World War II for gun sights, specifically in bomb sights and anti-aircraft weaponry.[22] Also, experiments have been conducted to use calcite for a cloak of invisibility.[23]

Microbiologically precipitated calcite has a wide range of applications, such as soil remediation, soil stabilization and concrete repair.

Calcite, obtained from an 80 kg sample of Carrara marble,[24] is used as the IAEA-603 isotopic standard in mass spectrometry for the calibration of δ18O and δ13C.[25]

Calcite is a common constituent of sedimentary rocks, limestone in particular, much of which is formed from the shells of dead marine organisms. Approximately 10% of sedimentary rock is limestone. It is the primary mineral in metamorphic marble. It also occurs in deposits from hot springs as a vein mineral; in caverns as stalactites and stalagmites; and in volcanic or mantle-derived rocks such as carbonatites, kimberlites, or rarely in peridotites.

Calcite is often the primary constituent of the shells of marine organisms, e.g., plankton (such as coccoliths and planktic foraminifera), the hard parts of red algae, some sponges, brachiopods, echinoderms, some serpulids, most bryozoa, and parts of the shells of some bivalves (such as oysters and rudists). Calcite is found in spectacular form in the Snowy River Cave of New Mexico as mentioned above, where microorganisms are credited with natural formations. Trilobites, which became extinct a quarter billion years ago, had unique compound eyes that used clear calcite crystals to form the lenses.[26] It also forms a substantial part of birds' eggshells, and the δ13C of the diet is reflected in the δ13C of the calcite of the shell.[27]

The largest documented single crystal of calcite originated from Iceland, measured 7×7×2 m and 6×6×3 m and weighed about 250 tons.[28] Classic samples have been produced at Madawaska Mine, near Bancroft, Ontario.[29]

Bedding parallel veins of fibrous calcite, often referred to in quarrying parlance as "beef", occur in dark organic rich mudstones and shales, these veins are formed by increasing fluid pressure during diagenesis.[30]

Calcite formation can proceed by several pathways, from the classical terrace ledge kink model[31] to the crystallization of poorly ordered precursor phases (amorphous calcium carbonate, ACC) via an Ostwald ripening process, or via the agglomeration of nanocrystals.[32]

The crystallization of ACC can occur in two stages: first, the ACC nanoparticles rapidly dehydrate and crystallize to form individual particles of vaterite. Secondly, the vaterite transforms to calcite via a dissolution and reprecipitation mechanism with the reaction rate controlled by the surface area of calcite.[33] The second stage of the reaction is approximately 10 times slower. However, the crystallization of calcite has been observed to be dependent on the starting pH and presence of Mg in solution.[34] A neutral starting pH during mixing promotes the direct transformation of ACC into calcite. Conversely, when ACC forms in a solution that starts with a basic initial pH, the transformation to calcite occurs via metastable vaterite, which forms via a spherulitic growth mechanism.[35] In a second stage this vaterite transforms to calcite via a surface-controlled dissolution and recrystallization mechanism. Mg has a noteworthy effect on both the stability of ACC and its transformation to crystalline CaCO3, resulting in the formation of calcite directly from ACC, as this ion destabilizes the structure of vaterite.

Calcite may form in the subsurface in response to activity of microorganisms, such as during sulfate-dependent anaerobic oxidation of methane, where methane is oxidized and sulfate is reduced by a consortium of methane oxidizers and sulfate reducers, leading to precipitation of calcite and pyrite from the produced bicarbonate and sulfide. These processes can be traced by the specific carbon isotope composition of the calcites, which are extremely depleted in the 13C isotope, by as much as −125 per mil PDB (δ13C).[36]

Calcite seas existed in Earth history when the primary inorganic precipitate of calcium carbonate in marine waters was low-magnesium calcite (lmc), as opposed to the aragonite and high-magnesium calcite (hmc) precipitated today. Calcite seas alternated with aragonite seas over the Phanerozoic, being most prominent in the Ordovician and Jurassic. Lineages evolved to use whichever morph of calcium carbonate was favourable in the ocean at the time they became mineralised, and retained this mineralogy for the remainder of their evolutionary history.[37] Petrographic evidence for these calcite sea conditions consists of calcitic ooids, lmc cements, hardgrounds, and rapid early seafloor aragonite dissolution.[38] The evolution of marine organisms with calcium carbonate shells may have been affected by the calcite and aragonite sea cycle.[39]

Calcite is one of the minerals that has been shown to catalyze an important biological reaction, the formose reaction, and may have had a role in the origin of life.[9] Interaction of its chiral surfaces (see Form) with aspartic acid molecules results in a slight bias in chirality; this is one possible mechanism for the origin of homochirality in living cells.[40]