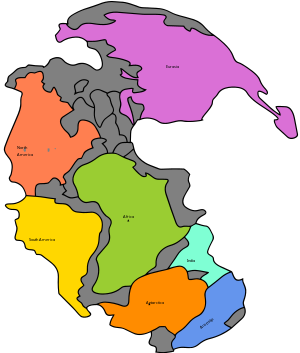 The supercontinent cycle is the quasi-periodic aggregation and dispersal of Earth's continental crust. There are varying opinions as to whether the amount of continental crust is increasing, decreasing, or staying about the same, but it is agreed that the Earth's crust is constantly being reconfigured. One complete supercontinent cycle is said to take 300 to 500 million years. Continental collision makes fewer and larger continents while rifting makes more and smaller continents. 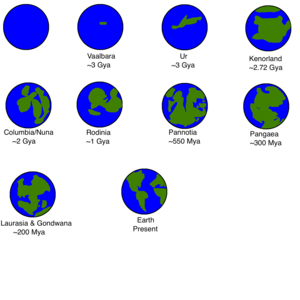 Simplistic representation of the supercontinent cycle to modern day

The second view (Protopangea-Paleopangea), based on both palaeomagnetic and geological evidence, is that supercontinent cycles did not occur before about 0.6 Ga (during the Ediacaran Period). Instead, the continental crust comprised a single supercontinent from about 2.7 Ga (Gigaannum, or "billion years ago") until it broke up for the first time, somewhere around 0.6 Ga. This reconstruction[3] is based on the observation that if only small peripheral modifications are made to the primary reconstruction, the data show that the palaeomagnetic poles converged to quasi-static positions for long intervals between about 2.7–2.2, 1.5–1.25 and 0.75–0.6 Ga.[4] During the intervening periods, the poles appear to have conformed to a unified apparent polar wander path. Thus the paleomagnetic data are adequately explained by the existence of a single Protopangea–Paleopangea supercontinent with prolonged quasi-integrity. The prolonged duration of this supercontinent could be explained by the operation of lid tectonics (comparable to the tectonics operating on Mars and Venus) during Precambrian times, as opposed to the plate tectonics seen on the contemporary Earth.[3] However, this approach was widely criticized as it is based on incorrect application of paleomagnetic data.[5] 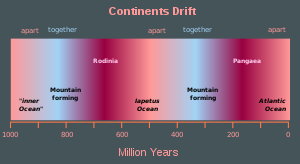 The hypothesized supercontinent cycle is overlaid by the Wilson Cycle named after plate tectonics pioneer John Tuzo Wilson, which describes the periodic opening and closing of oceanic basins from a single plate rift. The oldest seafloor material found today dates to only 170 million years old, whereas the oldest continental crust material found today dates to 4 billion years, showing the relative brevity of the regional Wilson cycles compared to the planetary pulse seen in the arrangement of the continents.

where κ is the thermal diffusivity of the mantle lithosphere (c. 8×10−7 m2/s), aeff is the effective thermal expansion coefficient for rock (c. 5.7×10−5 °C−1), T1 is the temperature of ascending magma compared to the temperature at the upper boundary (c. 1220 °C for the Atlantic and Indian Oceans, c. 1120 °C for the eastern Pacific) and dr is the depth of the ridge below the ocean surface.[7] After plugging in rough numbers for the sea floor, the equation becomes:

for the eastern Pacific Ocean:

where d is in meters and t is in millions of years, so that just-formed crust at the mid-ocean ridges lies at about 2,500 m depth, whereas 50-million-year-old seafloor lies at a depth of about 5,000 m.[8]

Because the continental shelf has a very low slope, a small increase in sea level will result in a large change in the percent of continents flooded.

There is thus a relatively simple relationship between the supercontinent cycle and the mean age of the seafloor.

There will also be a climatic effect of the supercontinent cycle that will amplify this further:

There is a progression of tectonic regimes that accompanies the supercontinent cycle:

The principal mechanism for evolution is natural selection among diverse populations. As genetic drift occurs more frequently in small populations, diversity is an observed consequence of isolation. Less isolation, and thus less diversification, occurs when the continents are all together, producing both one continent and one ocean with one coast. In Latest Neoproterozoic to Early Paleozoic times, when the tremendous proliferation of diverse metazoa occurred, isolation of marine environments resulted from the breakup of Pannotia.

A north–south arrangement of continents and oceans leads to much more diversity and isolation than east–west arrangements. North-to-south arrangements give climatically different zones along the communication routes to the north and south, which are separated by water or land from other continental or oceanic zones of similar climate. Formation of similar tracts of continents and ocean basins oriented east–west would lead to much less isolation, diversification, and slower evolution, since each continent or ocean is in fewer climatic zones. Through the Cenozoic, isolation has been maximized by a north–south arrangement.

Diversity, as measured by the number of families, follows the supercontinent cycle very well.[10]