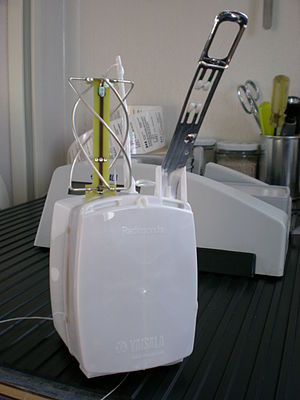 A radiosonde is a battery-powered telemetry instrument carried into the atmosphere usually by a weather balloon that measures various atmospheric parameters and transmits them by radio to a ground receiver. Modern radiosondes measure or calculate the following variables: altitude, pressure, temperature, relative humidity, wind (both wind speed and wind direction), cosmic ray readings at high altitude and geographical position (latitude/longitude). Radiosondes measuring ozone concentration are known as ozonesondes.[1]

Radiosondes may operate at a radio frequency of 403 MHz or 1680 MHz. A radiosonde whose position is tracked as it ascends to give wind speed and direction information is called a rawinsonde ("radar wind -sonde").[2][3] Most radiosondes have radar reflectors and are technically rawinsondes. A radiosonde that is dropped from an airplane and falls, rather than being carried by a balloon is called a dropsonde. Radiosondes are an essential source of meteorological data, and hundreds are launched all over the world daily.

Kites used to fly a meteograph

Meteograph used by the US Weather Bureau in 1898 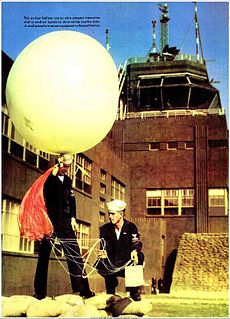 US sailors launching a radiosonde during World War 2

The first flights of aerological instruments were done in the second half of the 19th century with kites and meteographs, a recording device measuring pressure and temperature that was recuperated after the experiment. This proved to be difficult because the kites were linked to the ground and were very difficult to manoeuvre in gusty conditions. Furthermore, the sounding was limited to low altitudes because of the link to the ground.

Gustave Hermite and Georges Besançon, from France, were the first in 1892 to use a balloon to fly the meteograph. In 1898, Léon Teisserenc de Bort organized at the Observatoire de Météorologie Dynamique de Trappes the first regular daily use of these balloons. Data from these launches showed that the temperature lowered with height up to a certain altitude, which varied with the season, and then stabilized above this altitude. De Bort's discovery of the tropopause and stratosphere was announced in 1902 at the French Academy of Sciences.[4] Other researchers, like Richard Aßmann and William Henry Dines, were working at the same times with similar instruments.

In 1924, Colonel William Blaire in the U.S. Signal Corps did the first primitive experiments with weather measurements from balloon, making use of the temperature dependence of radio circuits. The first true radiosonde that sent precise encoded telemetry from weather sensors was invented in France by Robert Bureau [fr]. Bureau coined the name "radiosonde" and flew the first instrument on January 7, 1929.[4][5] Developed independently a year later, Pavel Molchanov flew a radiosonde on January 30, 1930. Molchanov's design became a popular standard because of its simplicity and because it converted sensor readings to Morse code, making it easy to use without special equipment or training.[6]

Working with a modified Molchanov sonde, Sergey Vernov was the first to use radiosondes to perform cosmic ray readings at high altitude. On April 1, 1935, he took measurements up to 13.6 km (8.5 mi) using a pair of Geiger counters in an anti-coincidence circuit to avoid counting secondary ray showers.[6][7] This became an important technique in the field, and Vernov flew his radiosondes on land and sea over the next few years, measuring the radiation's latitude dependence caused by the Earth's magnetic field.

In 1936, the U.S. Navy assigned the U.S. Bureau of Standards (NBS) to develop an official radiosonde for the Navy to use.[8] The NBS gave the project to Harry Diamond, who had previously worked on radio navigation and invented a blind landing system for airplanes.[9] The organization led by Diamond eventually (in 1992) became a part of the U.S. Army Research Laboratory. In 1937, Diamond, along with his associates Francis Dunmore and Wilbur Hinmann, Jr., created a radiosonde that employed audio-frequency subcarrier modulation with the help of a resistance-capacity relaxation oscillator. In addition, this NBS radiosonde was capable of measuring temperature and humidity at higher altitudes than conventional radiosondes at the time due to the use of electric sensors.[8][10]

In 1938, Diamond developed the first ground receiver for the radiosonde, which prompted the first service use of the NBS radiosondes in the Navy. Then in 1939, Diamond and his colleagues developed a ground-based radiosonde called the “remote weather station,” which allowed them to automatically collect weather data in remote and inhospitable locations.[11] By 1940, the NBS radiosonde system included a pressure drive, which measured temperature and humidity as functions of pressure.[8] It also gathered data on cloud thickness and light intensity in the atmosphere.[12] Due to this and other improvements in cost (about $25), weight (> 1 kilogram), and accuracy, hundreds of thousands of NBS-style radiosondes were produced nationwide for research purposes, and the apparatus was officially adopted by the U.S. Weather Bureau.[8][10]

Diamond was given the Washington Academy of Sciences Engineering Award in 1940 and the IRE Fellow Award (which was later renamed the Harry Diamond Memorial Award) in 1943 for his contributions to radio-meteorology.[11][13]

In 1985, as part of the Soviet Union's Vega program, the two Venus probes, Vega 1 and Vega 2, each dropped a radiosonde into the atmosphere of Venus. The sondes were tracked for two days.

Although modern remote sensing by satellites, aircraft and ground sensors is an increasing source of atmospheric data, none of these systems can match the vertical resolution (30 m (98 ft) or less) and altitude coverage (30 km (19 mi)) of radiosonde observations, so they remain essential to modern meteorology.[2]

Although hundreds of radiosondes are launched worldwide each day year-round, fatalities attributed to radiosondes are rare. The first known example was the electrocution of a lineman in the United States who was attempting to free a radiosonde from high-tension power lines in 1943.[14][15] In 1970 an Antonov 24 operating Aeroflot Flight 1661 suffered a loss of control after striking a radiosonde in flight resulting in the death of all 45 people on board.

A rubber or latex balloon filled with either helium or hydrogen lifts the device up through the atmosphere. The maximum altitude to which the balloon ascends is determined by the diameter and thickness of the balloon. Balloon sizes can range from 100 to 3,000 g (3.5 to 105.8 oz). As the balloon ascends through the atmosphere, the pressure decreases, causing the balloon to expand. Eventually, the balloon will expand to the extent that its skin will break, terminating the ascent. An 800 g (28 oz) balloon will burst at about 21 km (13 mi).[16] After bursting, a small parachute on the radiosonde's support line carries it to Earth. A typical radiosonde flight lasts 60 to 90 minutes. One radiosonde from Clark Air Base, Philippines, reached an altitude of 155,092 ft (47,272 m).

The modern radiosonde communicates via radio with a computer that stores all the variables in real time. The first radiosondes were observed from the ground with a theodolite, and gave only a wind estimation by the position. With the advent of radar by the Signal Corps it was possible to track a radar target carried by the balloons with the SCR-658 radar. Modern radiosondes can use a variety of mechanisms for determining wind speed and direction, such as a radio direction finder or GPS. The weight of a radiosonde is typically 250 g (8.8 oz).

Sometimes radiosondes are deployed by being dropped from an aircraft instead of being carried aloft by a balloon. Radiosondes deployed in this way are called dropsondes.

Worldwide there are about 1,300 radiosonde launch sites.[17] Most countries share data with the rest of the world through international agreements. Nearly all routine radiosonde launches occur 45 minutes before the official observation time of 0000 UTC and 1200 UTC, so as to provide an instantaneous snapshot of the atmosphere.[18] This is especially important for numerical modeling. In the United States the National Weather Service is tasked with providing timely upper-air observations for use in weather forecasting, severe weather watches and warnings, and atmospheric research. The National Weather Service launches radiosondes from 92 stations in North America and the Pacific Islands twice daily. It also supports the operation of 10 radiosonde sites in the Caribbean.

A list of U.S. operated land based launch sites can be found in Appendix C, U.S. Land-based Rawinsonde Stations[19] of the Federal Meteorological Handbook #3,[20] titled Rawinsonde and Pibal Observations, dated May 1997.

Raw upper air data is routinely processed by supercomputers running numerical models. Forecasters often view the data in a graphical format, plotted on thermodynamic diagrams such as Skew-T log-P diagrams, Tephigrams, and or Stüve diagrams, all useful for the interpretation of the atmosphere's vertical thermodynamics profile of temperature and moisture as well as kinematics of vertical wind profile.[citation needed]

Radiosonde data is a crucially important component of numerical weather prediction. Because a sonde may drift several hundred kilometers during the 90- to 120-minute flight, there may be concern that this could introduce problems into the model initialization.[citation needed] However, this appears not to be so except perhaps locally in jet stream regions in the stratosphere.[21]

According to article 1.109 of the International Telecommunication Union's (ITU) ITU Radio Regulations (RR):[22]