Short description: State governed as a single unit with a supreme central government 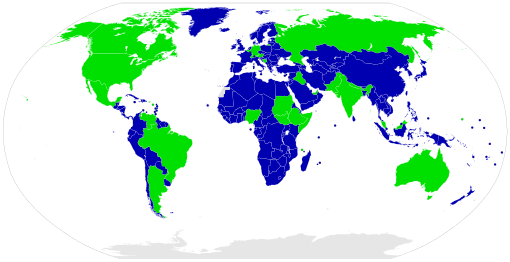 Unitary states stand in contrast with federations, also known as federal states. A large majority of the world's sovereign states (166 of the 193 UN member states) have a unitary system of government.[2]

A unitary system of government can be considered the opposite of federalism. In federations, the provincial/regional governments share powers with the central government as equal actors through a written constitution, to which the consent of both is required to make amendments. This means that the sub-national units have a right of existence and powers that cannot be unilaterally changed by the central government.[3]

There are, however, similarities between federalism and devolution. Devolution within a unitary state, like federalism, may be symmetrical, with all sub-national units having the same powers and status, or asymmetric, with sub-national units varying in their powers and status. Many unitary states have no areas possessing a degree of autonomy.[4] In such countries, sub-national regions cannot decide their own laws. Examples are Romania, Ireland and Norway . Svalbard has even less autonomy than the mainland. It is directly controlled by the government and has no local rule.

The pathway of regional integration or separation

Italics: States with limited recognition from other sovereign states or intergovernmental organizations.

The United Kingdom is an example of a unitary state. Scotland, Wales and Northern Ireland have a degree of autonomous devolved power, but such power is delegated by the Parliament of the United Kingdom, which may enact laws unilaterally altering or abolishing devolution. Similarly in Spain , the devolved powers are delegated through the central government.