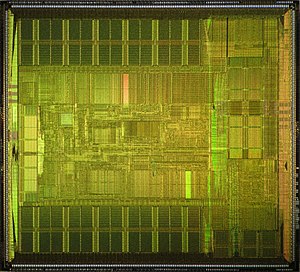 The Alpha 21164, also known by its code name, EV5, is a microprocessor developed and fabricated by Digital Equipment Corporation that implemented the Alpha instruction set architecture (ISA). It was introduced in January 1995, succeeding the Alpha 21064A as Digital's flagship microprocessor. It was succeeded by the Alpha 21264 in 1998.

The 21164 continued the performance lead from the 275 MHz Alpha 21064A until the introduction of the Intel Pentium Pro in November 1995, when a 200 MHz version outperformed the 300 MHz 21164 on the SPECint95 base benchmark suite. The 21164 retained its floating-point performance lead. The 333 MHz 21164 introduce the following year outperformed the Pentium Pro, but it was later surpassed by the MIPS Technologies R10000 and then by the Hewlett-Packard PA-8000 in the same year.[1]

The Alpha 21164 is a four-issue superscalar microprocessor capable of issuing a maximum of four instructions per clock cycle to four execution units: two integer and two floating-point. The integer pipeline is seven stages long, and the floating-point pipeline is ten stages long. The 21164 implemented a 43-bit virtual address and a 40-bit physical address. It was therefore capable of addressing 8 TB of virtual memory and 1 TB of physical memory.

The integer register file contained forty 64-bit registers, of which thirty-two are specified by the Alpha Architecture and eight are for use by PALcode as scratchpad memory. The register file has four read ports and two write ports evenly divided between the two integer pipelines.[2]

The 21164 has three levels of cache, two on-die and one external and optional. The caches and the associated logic consisted of 7.2 million transistors.[3]

The primary cache is split into separate caches for instructions and data, referred to as the I-cache and D-cache respectively. They are 8 KB in size, direct-mapped and have a cache line size of 32 bytes. The D-cache is dual-ported, to improve performance, and is implemented by duplicating the cache twice. It uses a write-through write policy and an on-read allocation policy.

The secondary cache, known as the S-cache, is on-die and has a capacity of 96 KB. An on-die secondary cache was required as the 21164 required more bandwidth than an external secondary cache could supply in order to provide it with enough instructions and data.[4] The cache required two cycles to access due to its large area. To improve performance, the cache is pipelined. Another benefit of an on-die secondary cache was that it could be easily implemented as a multi-way cache, and as a result, the cache is three-way set associative, offering improved hit rates than direct-mapped caches.[5] The S-cache, due to the large physical area required, was implemented in two halves which flank the I-box, E-box, F-box and M-box. This was done so the cache could return data in two cycles.

The Alpha 21164 is packaged in a 499-pin ceramic interstitial pin grid array (IPGA) measuring 57.40 by 57.40 mm. The package had a heat spreader with two studs to which the heat sink was bolted. 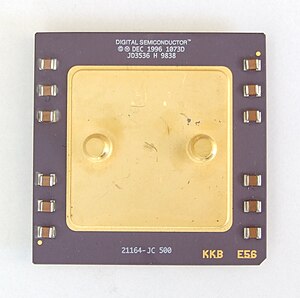 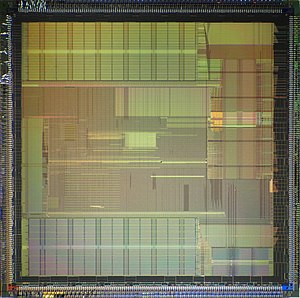 It was first described in October 1995 at the Microprocessor Forum. On 13 November 1995, Digital announced that samples would ship later in the month. The first version, operating at 366 MHz, was introduced in 1996. On 8 July 1996, Digital announced that a 433 MHz version was available and a 500 MHz version was sampling with volume quantities due in September 1996. The 433 MHz version was priced at $1,492 per unit in quantities of 1,000. The 600 MHz version was introduced on 31 March 1997, shipping in volume quantities. Samsung Electronics signed a deal with Digital in June 1996 to second source the Alpha 21164A and the company was the only one to fabricate the 666 MHz model. 366 to 500 MHz samples were introduced on 11 November 1996 with volume availability in 1997. The Alpha 21164A was fabricated at Digital's Hudson, Massachusetts and Samsung's Kihueng, South Korea fabrication plants.

The Alpha 21164PC, also known as the PCA56, is a low-cost version of the Alpha 21164A introduced on 17 March 1997. The microprocessor was jointly developed by Digital and Mitsubishi Electric Corporation, and both companies fabricated the design. Mitsubishi later suspended the joint development agreement for future Alpha microprocessors with Digital in early 1998 and ceased to fabricate the Alpha 21164PC in mid-1998, exited the Alpha market because the economic conditions in the company's markets.[11][12]

The Alpha 21164PC operated at clock frequencies of 400, 466 and 533 MHz. Major changes are the omission of the S-cache, a larger I-cache, and the inclusion of Motion Video Instructions (MVI), an extension to the Alpha Architecture which introduced single instruction multiple data (SIMD) instructions for improving the performance of MPEG encoding. The S-cache was removed to reduce the transistor count, which reduced the die size and in turn, cost. The I-cache was doubled in capacity to 16 KB from 8 KB to compensate for the lack of S-cache, as the Alpha 21164 relied on the S-cache to complement the I-cache in order to provide enough bandwidth to achieve adequate performance. The amount of B-cache was limited to 512 KB to 4 MB, with 1 and 2 MB capacities also supported. The microprocessor uses a 43-bit virtual address and 33-bit physical address.

The Alpha 21164PC was used by Digital in their AlphaPC 164SX motherboard.

The PCA57 was used by Digital in its AlphaPC 164RX motherboard.

Digital and VLSI Technology developed chipsets for the 21164 and its derivatives. Digital also developed custom application-specific integrated circuit (ASICs) for use in the high-end models of their AlphaServer family such as the AlphaServer 8200 and 8400.

The 21171, also known as Alcor, was the first chipset for the 21164, introduced in January 1995 alongside the microprocessor it supports. It was developed and fabricated by Digital. The 21171 is an upgraded DECchip 21071 modified to support the new system bus protocol the 21164 uses. It consisted of a control chip that contained the memory and PCI controllers, and four data slice chips that interfaced the 256-bit memory bus and PCI bus to the system bus. The 21171 provides a 64-bit wide PCI bus that runs at 33 MHz.

The Pyxis chipset, also known as the 21174, supported the 21164A and 21164PC microprocessors. Unlike previous chipsets, it was designed for low-cost systems. As a result, it was a single-chip design packaged in a 474-contact ceramic ball grid array (CBGA) instead of multiple packages.[13] It was subsequently used in cost-sensitive applications such as entry-level workstations (Digital Personal Workstation a-Series) and motherboards such as the AlphaPC 164LX and 164SX. When it was introduced, the 21174 was priced at US$142 in quantities of 1,000.[14]

Users of Polaris included Digital, for its AlphaPC 164RX motherboard.