Miniature meriam kecil is a type of very small cannon found on the Indonesian archipelago. Usually the length of these cannons is between 10 to 60 cm, with a caliber of 15 or 16 mm,[1] and has been around for hundreds of years. They are designed and decorated like a normal sized meriam kecil (lela or rentaka).[2]

Miniature meriam kecil are shaped like the larger cannon, but may have unusual shapes. Some of them are in the form of buffalos, or crocodiles. They can be single or double barreled.[2] 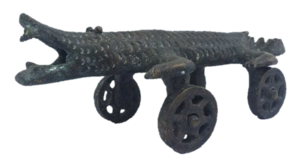 In Borneo, miniature meriam kecil are more varied in design. With hundreds of years of trade influence with China , India and the Middle East coupled with local design preferences, there are many artistic models of Bornean meriam kecil. Because cannon plays a large role in the traditional lives of the natives of Borneo, the intricate decorations of the barrel and the elaborate details of its designs and engravings give the impression that they also have spiritual and magical uses. Many types of Bornean cannon and brass wares are displayed in the Brunei museum and the Sarawak museum.[3]

In the archipelago, especially in Borneo and the Indonesian archipelago, miniature meriam kecil are primarily used as a preferred monetary tender, a dowry, as a family heirloom, and a status symbol.[3]

Even though they look like toys, they are functional and dangerous at close range. As documented by G. B. Gardner:[4]:95

"Malays also made numbers tiny cannon, with bores of half inch to one inch. These were mostly toys, but I believe in war a number of them were sometimes used to defend a gateway. A row fastened to a log and charged with slugs would cause damage at close range. I have seen three barrelled specimens that were obviously made for this purpose."

Although one source said that pistols had not been present in the area until recently and that the miniatures were carried in a waist band or sash and used as hand guns, they would be particularly inconvenient in this application. Maybe they are used to fire salutes or produced as novelty item. However, they can still be found in Indonesia in some quantity at the end of the 20th century.[1] Some miniature meriam kecil are also cast on top of lela barrels for use if the enemy charged before the lela could be reloaded.[4]:95